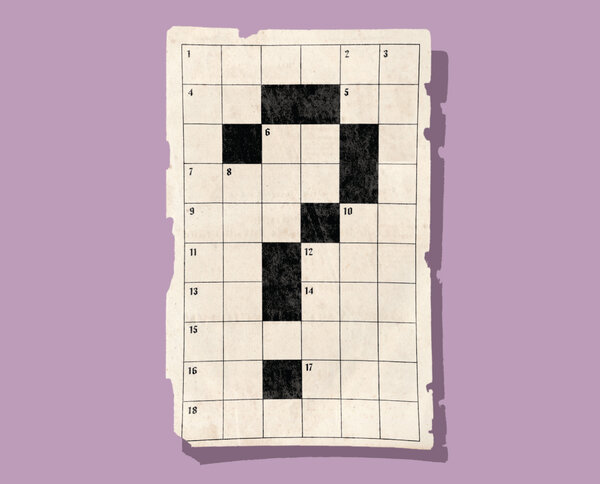 There’s a certain state of mind I call crossword brain: It’s both intuitive and counterintuitive, knowing when to turn away from the seemingly obvious solution, but also knowing when to trust your instincts and go with the answer that feels good. Crossword brain requires you to bend and sometimes entirely break the way you think you should make connections. Crosswords tug all sides of your mind, requiring you to dart from straightforward definitions to narrative logic to free association to bad dad puns, all in the same space.

But crossword brain is far older than the crossword itself. One of the more curious facts about the crossword is how relatively young it is. The first puzzle appeared on Dec. 21, 1913, born out of desperation when Arthur Wynne, the editor of The New York World, needed to fill space in a holiday fun supplement. Yet as THE OLD ENGLISH AND ANGLO-LATIN RIDDLE TRADITION (Harvard University, $35), a comprehensive new collection beautifully edited by the Oxford professor Andy Orchard, demonstrates, everything you need to know about crosswords you can learn from Anglo-Saxon riddles: Riddles are the ür-crossword puzzles.

Riddles are at the heart of language. The Old English verb raedan lies at the root of “to read” and “to riddle”: To read is to riddle, to riddle is to read. What makes the riddle so special and weird as a form — and so like the crossword — is its ability to be at once highbrow and lowbrow. Riddles represent the whole of Anglo-Saxon life. These short pieces range about as widely as possible in tone and form, from ribald cracks to grammar lessons to ornate religious puzzles by the archbishop of Canterbury. For perhaps the first time, Orchard’s collection gathers these early medieval riddles from across centuries and languages. An equally hefty companion book of commentary traces the riddles’ provenance, how scholars over the centuries have solved them and where they’ve gone astray.

The most famous Anglo-Saxon riddles are the Exeter Book riddles, a collection of about 90 dating to around A.D. 1000; they appear here in crisp new translation from Old English. The Exeter Book riddles have sparked their own cottage industry in the field: The only surviving manuscript does not include solutions, so scholars argue over not only what the riddles mean, but even where one stops and the next begins. Yet the Exeter Book riddles are part of a much bigger literary tradition, and as Orchard’s collection shows, figuring out what they mean requires knowing where they came from and the riddles they subsequently inspired.

Before diving into how the riddles work, we need to keep a few key terms in mind. “Anglo-Saxon” refers to the history and culture of the people living in what is now England from about A.D. 450 to 1066, that is, when the Normans took over. “Anglo-Latin” is Latin that was written in England. “Old English” is the earliest recorded version of the language we speak today, though Old English bears about as much resemblance to contemporary English as English does to modern Danish: Knowing one and not the other, you’ll be able to pick out some words and phrases, but that’s about it. (Middle English — think Chaucer — is different; once you learn some basic accent shifts and key vowel changes, you’ll be reading “The Canterbury Tales” in an hour.)

Riddles aren’t just clever one-offs: They show the full range of literature from this era, and they illuminate an interconnected world. Riddles tap into crossword-brain from all angles. First, you have to figure out how the riddle is asking you to think — Is this a straightforward definition? A double entendre? A wordplay-based web? — and then you try to solve. Orchard’s collection reveals how much riddles speak to one another not only across time, but across languages. To crack Old English riddles from the Exeter Book, you have to know about their Anglo-Latin predecessors. One Exeter Book riddle describes a creature with one eye and 1,200 heads. It makes no sense — some readers have proposed weird answers like “organ” — unless you know an aenigma by a Latin riddler called Symphosius that also describes a one-eyed being with many heads, but gives the answer: a one-eyed seller of garlic.

Anglo-Latin riddlers often put their collections together in a very particular order involving elaborate acrostics. The Exeter Book riddles use several traditional riddle opening and closing formulas, like Saga hwaet ic hatte (Say what I am called) and Ic geseah (I saw). Old English poetry uses complex patterns of alliteration, and the riddles are no exception, leaning heavily on repetition and rhythm to give hints. They also play with grammatical gender. Lots of riddles like the paradox of a mother that is also a daughter, but where Latin riddles typically involve the feminine glacies (ice) and aqua (water), Greek riddles favor “night and day,” since both those nouns are feminine in Greek; in Old English, the trope takes another twist, as both waeter (water) and is (ice) are neuter.

The best way to get better at crosswords is to do crosswords. That’s how you become fluent in crosswordese: AERIE and ARIA and OREO; ISSA RAE and MEL OTT and TERI GARR. Similarly, many riddles rely on the same motifs, and once you start seeing a theme used one way, you can’t help seeing it again and again. Orchard tracks themes like the “biter bitten,” starting with more literal veggie-based riffs — an onion bites the eyes, pepper bites the tongue — and moving on to metaphorical variants as well, like “wind” (indeed, the “tooth of the wind” becomes a common riddle within a riddle) or “greed.”

Many riddles play with form as well as content. Here’s where the riddles start to act like cryptic crosswords, a variety more common in Britain than in America. Cryptic crosswords differ from the symmetrical New York Times kind by their extra wordplay. Every cryptic clue has two layers: There’s the content of the clue itself, and then there’s a part of the clue that tells you how to solve it. Cryptics might involve anagrams, containers (the word is hidden in plain sight, sandwiched between other words), reversals or deletions; in all cases, there’s something you have to do to the letters themselves to get at the solution.

The Anglo-Latin riddler Tatwine — whose day job was archbishop of Canterbury — wrote these kinds of proto-cryptic aenigmata. One riddle instructs readers to add the “ninth letter” (“I”) halfway inside the answer, turning a “ruddy jewel” into “snowy hail”: PRUNA (ember) into PRUINA (hoarfrost). Other cryptic-style riddles require more elaborate gyrations. The Riddles of Gestumblindi, a group of verse exchanges in an Icelandic saga, use riddles like a rap battle, ramping up the contest with ever-escalating cleverness. One such riddle relies on synonyms and homonyms, requiring the solver to climb through both literal and metaphorical definitions to arrive at the eventual answer: poetry itself.

If anything binds these riddles together, it’s their love of writing. Many are meta-riddles, obsessed with manuscript culture. Perhaps the first bookworm in the English language appears in the Exeter Book riddles: A moth eats words, gnawing through the pages as foodstuff but losing the sense. The riddle warns the reader about the danger of ingesting words without digesting knowledge: consuming the page but not getting the drift. In this way, it’s also a meta-puzzle, a warning against ripping through the riddles without stopping to figure out what they’re saying.

Riddles, games and crosswords might seem like throwaways, entertaining diversions from real life. Crosswords entered The New York Times in 1942 to give readers a distraction from the bleak headlines of World War II. But crossword-brain and riddle logic tap into the heart of what it means to read, and to be human. To think inside the box, you have to let your mind wander free.