Home » Books » When Her Mother Died, She Found Solace at a Korean Grocery

When Her Mother Died, She Found Solace at a Korean Grocery After an hour of discussing her mother, the afterlife and the shamelessness sometimes required in producing art, Michelle Zauner adjusted her video camera to show her Bushwick apartment. Her coffee table, suddenly in view, was covered with Jolly Pong Cereal Snack, NongShim Shrimp Crackers, Lotte Malang Cow Milk Candies and other Asian junk food.

“This whole time we’ve been talking,” she said, “you’ve been in front of these snacks.”

These are her favorite selections from H Mart, the Korean-American supermarket chain that for her serves as both muse and refuge. Zauner, best known for her music project Japanese Breakfast, wrote about the “beautiful, holy place” and the death of her mother, Chongmi, in a 2018 essay for The New Yorker, “Crying in H Mart,” which led to a memoir by the same name that Knopf is publishing on Tuesday.

In the essay, which is the first chapter of her book, she relayed her grief, her appetite and her fear that, after losing Chongmi to cancer in 2014, “am I even Korean anymore if there’s no one left to call and ask which brand of seaweed we used to buy?” The rest of the memoir explores her identity as a biracial Asian-American, the bonds that food can forge and her efforts to understand and remember her mother. 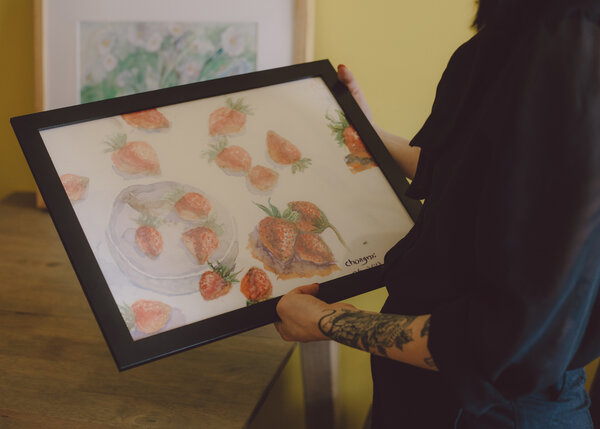 Zauner’s parents met in Seoul in the early 1980s, when her father, Joel, moved there from the United States to sell cars to the American and Canadian military. Chongmi was working at the hotel where he stayed. They married after three months of dating and traveled through Japan, Germany and South Korea again before landing in Eugene, Ore., where Michelle Zauner grew up. In early drafts of the book, she said during our interview, she tried to imagine what it was like for her mother to marry so quickly, to face a language barrier with her husband, to uproot herself over and over. When she asked her father questions like “Do you remember how she was feeling?,” he answered with geographical facts and figures.

As with many immigration stories, scarcity threaded its way through a lot of what Zauner found while writing the book: In their family, her father was so focused on providing that he couldn’t give her the emotional support she sought, while her mother viewed identity crises almost as a waste of energy. “I feel like she’d be moved by parts of the book,” Zauner said, “but I think there are parts she’d think, ‘I don’t know why you had to go on about this for the whole book when you’re just like an American kid.’”

Zauner, 32, writes about their volatile relationship, contrasting her mother’s poised restraint with her need to express herself, her sense of urgency that “no one could possibly understand what I went through and I needed everyone to know.”

After graduating from Bryn Mawr, she threw herself into the Philadelphia rock band Little Big League in 2011 before striking out on her own as Japanese Breakfast. Her first two solo albums, like her memoir, focused on grief: “Psychopomp,” in 2016, and “Soft Sounds From Another Planet,” in 2017. Her next one, “Jubilee,” is scheduled for release in June, and it is more joyful, influenced by Kate Bush, Björk and Randy Newman. In between these projects, she worked on video game soundtracks, directed music videos and crashed into the literary world, reflecting her maximalist and, yes, shameless approach to creativity.

“The thing about Michelle is you just need to give her a little push in that direction — an affirmation — and suddenly she’s just flying,” said Daniel Torday, a novelist and the director of the creative writing program at Bryn Mawr, who has been a mentor to Zauner.

For her the artistic process, whether it is in her music or her writing, often feels all-consuming and anxiety-producing, something she handles by working through it. “If I’m going to take the time to go in on something,” Zauner said, “I want to be terrified of it.”

And there are terrifying parts she confronts when retracing the last few months of her mother’s life. It is not exactly the cancer — in the book, she describes the disease with polish, crushing Vicodin for her mother with a spoon and scattering its blue crumbs over scoops of ice cream “like narcotic sprinkles.” It is that Chongmi was dying just as their relationship was at its best, “a sort of renaissance period, where we were really getting to enjoy each other’s company and know each other as adults,” Zauner said.

In 2014, she moved back home to help care for her. Chongmi died that October, two weeks after Michelle Zauner married Peter Bradley, a fellow musician. By Christmas, he joined her and her father in Eugene, navigating the first heavy moment of their new life together — “like a baptism of adulthood,” Bradley said.

She and her father haven’t been in contact for more than a year, save for an attempt at therapy over Zoom. After her mother died, “our grief couldn’t come together in this way where we could experience it together,” Zauner said. “He started wearing this big ruby in his ear and then got a big tattoo, lost 40 pounds, started dating this young woman, and it felt like kind of a second death.”

In an essay for Harper’s Bazaar published earlier this month, she wrote about the pain of that experience, then searching for a way to make peace with him and his new relationship, which has since ended.

Joel Zauner, in a phone interview, expressed sadness about their estrangement. He avoided reading “Crying in H Mart” for months (Michelle Zauner sent him an advance copy), but when he did, he wept throughout and was stung that he wasn’t included in the acknowledgments. The tattoo was done on the anniversary of Chongmi’s death, he said, and is of her name in Korean, with the Korean word for “sweetheart” underneath.

“I’m not a perfect guy,” he said. “But I certainly deserve more than I was given in both the article and the book.”

Today, Zauner feels ready to shake this period of loss and just tour, and there is still more she wants to unpack about being Korean, possibly by living there for a year. “I think there’s a big part of my sense of belonging that is missing because I don’t speak the language fluently,” she said, and she is determined to preserve the thread she has to the Korean side of her family.

She became engrossed at one point with Emily Kim, who as Maangchi is known as “YouTube’s Korean Julia Child,” finding peace in the way she peeled Korean pears — “the Korean way,” Kim wrote in an email — using the knife to remove the skin in one long strip, the way Chongmi used to. In 2019, the two starred in a Vice video that explored the effects of migration on cuisine, and on Zauner’s 30th birthday, Kim made her dinner. “She’s a real Korean daughter,” Kim said.

Zauner feels wary, however, about her work in any conjunction with the anti-Asian attacks in the past year. “I’m fearful of using this tragedy to try and promote anything I’ve created,” she said over email the day after the Atlanta shootings. “It’s a little hard to encapsulate my feelings on such a heavy thing with a few words.”

Her belief system these days has become more nuanced than before. She is an atheist, “but then there has to be some smudging of the edges for me,” she said. “In some ways it is impossible for me to not feel like my mother was looking out for me because of the serendipitous, fateful way that things happened in my life.”

Almost a year ago, when she finished writing “Crying in H Mart,” she posted a photo of herself in her living room with her eyes closed and a peaceful smile, holding the book’s draft in her hands, with the caption “Happy Mother’s Day, Mom.”

There are instances when even though it goes against everything you believe, it’s important, Zauner said, to create an ambiguous space for things.

“Like when I leave flowers on her grave, I know technically what I am doing is I’m leaving the flowers for myself. I’m creating a ritual and commemorating her with my time by doing this. But that is not enough for me to feel OK about it,” she said. “I need to kind of believe that she knows that they’re there.”