‘Whore of New York’ Reflects on Sex, Love and Labor 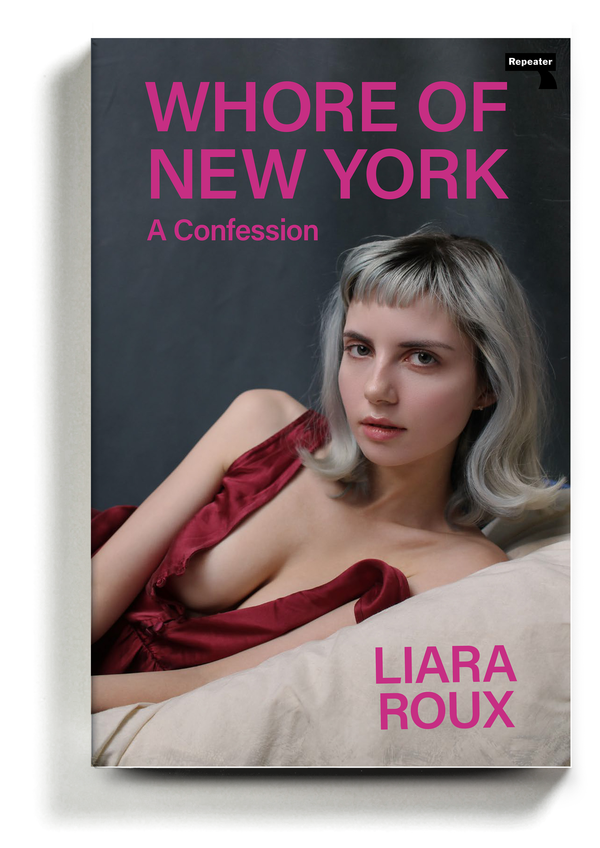 Let’s start with the title. “Whore of New York” employs the great and underused [Character] of [Place] naming convention — one seen in works like “Anne of Green Gables” and “The Merchant of Venice” and “Sweeney Todd: The Demon Barber of Fleet Street.” I like this titling practice for its orienting purposes. It’s as though the author has drawn a mall map and put a big YOU ARE HERE sticker on it for the reader.

So where are we in Liara Roux’s memoir? We are in New York, with a whore. (“Whore” being the author’s word, obviously.) Roux introduces herself as a native of the city, where she attended school on the Upper East Side and camped in the Catskills as a child, and enjoyed “the traditional autistic obsessions” of computers, train simulators and Pokémon. (That’s not a metaphor. Roux identifies as autistic.) She also liked playing with snakes, developing binary theories of the world and chatting up strangers on the internet. Some readers might consider these last three as evidence of weirdness, but I believe that all children are weird if you look closely enough.

As with most memoirs, the “childhood” section of the book is the least interesting. Things get cooking when Roux finds her calling. This happens in San Francisco, after she drops out of college to move in with a girlfriend, Anna, who is about a decade older and turns out to be bad news. Despite hefty warning signs — Anna is violent and manipulative — the two ultimately marry. As Roux toils at a miserable job, one of her acquaintances floats the notion of sex work. After a period of consideration and research, Roux creates a profile on Seeking Arrangements, a dating platform that is pretty much what the name suggests. (The company has since rebranded as Seeking, but the “arrangements” piece remains, shall we say, heavily implied in its marketing materials.)

Roux tackles her first appointment like an anthropologist, taking mental notes about the process of transactional seduction and walking away with $500 cash. (“Easy money.”) From there, the encounters vary. One man takes her to dinner, drops $10,000 on a shopping spree and books a room at the Ritz — only to announce that he won’t use a condom. (She walked out on him.) One client stalks her. Another tells her that he receives thrice-weekly massages, and Roux observes, with delight, that his skin is as smooth as “a pampered Wagyu cow.” Some clients are obnoxious, rude or paranoid. Some she likes — these, presumably, are the clients thanked in the book’s acknowledgments section for “their financial and emotional support, as well as their kind and thoughtful advice!”

Roux has zero interest in pretending that her experience is typical of her profession. This memoir, like all memoirs, is about the particularities of an individual life. It’s not about the State of the Sex Worker in America. Roux likes her work, but that doesn’t mean it is without discomfort, anxiety, alienation and fear. She suggests that this is true of many jobs, though it’s clear that even a distinctly advantaged tier of sex work contains more perils than the average job. After one client wraps a belt around her neck, Roux has nightmares for months. “I became acutely aware of just how vulnerable I was,” she writes. “It’s why I was always so stringent about my screening, despite the occasional whining of my prospective clients.”

A companion book to “Whore of New York” might be Studs Terkel’s classic 1974 oral history “Working: People Talk About What They Do All Day and How They Feel About What They Do.” In it, Terkel plunged into the lives of a gravedigger, a farmer, a photographer, a janitor, a steelworker, a barber, a dentist and dozens of others (including a sex worker). “Working,” Terkel wrote, was about the search “for daily meaning as well as daily bread, for recognition as well as cash, for astonishment rather than torpor; in short, for a sort of life rather than a Monday through Friday sort of dying.”

Along with being fascinated by the existential implications of work, Terkel was intrigued by each vocation’s logistics and vocabulary. These were the parts of Roux’s book that got my neurons firing, too. She methodically walks us through both the glamorous and ordinary elements of her job: scooting around the world on private jets, taking Pilates classes and logging time at the spa, but also getting tested every three months for S.T.I.s, managing a bookings calendar, dealing with Verizon when the stalker client won’t stop calling and convincing a doctor to prescribe H.I.V.-prevention medication. (The doctor insists his patient “probably” doesn’t need it; Roux pushes back and feels safer for it.)

“Whore of New York” is far from perfect. The writing meanders, dips into therapeutic bromides (“Family is triggering!”) and generally could have used another round of editing. Some sections are polished to a gleam while others feel like first or second drafts. Roux’s thoughts on desire and the internet are more vivid than her depiction of her troubled marriage to Anna, who remains a vague (if disturbing) character, at one point randomly slapping Roux on the street and at another secretly spending $10,000 of the couple’s shared money on comic books in a single month.

But for every few clumsy or fuzzy sentences, there’s one straight out of Edith Wharton: “Perhaps while I am at work, I am like a very nice teacup in a fine dining restaurant: used by many, but handled for the most part with care. I certainly have no aspirations to be kept in a cabinet somewhere, gathering dust.” This is a memoir by a young person about a life in progress, and if it occasionally feels like an unfinished work, that doesn’t detract from the book’s powers as an original reflection on joy, anguish, sex, love and labor.