Home » Books » Why Did Los Angeles Become a Cultural Mecca in the Early 1970s?

Why Did Los Angeles Become a Cultural Mecca in the Early 1970s? ROCK ME ON THE WATER
1974 — The Year Los Angeles Transformed Movies, Music, Television, and Politics
By Ronald Brownstein

In 1974, the most popular TV show in America was a comedy that put a racist, sexist homophobe center stage, then let him rant, impotently, against the churning social change all around him. Some 20 million households tuned in every Saturday night to watch Archie Bunker and his dysfunctional clan hash it out. After “All in the Family,” most of those TVs stayed tuned to CBS for “M*A*S*H,” “The Mary Tyler Moore Show,” “The Bob Newhart Show” and “The Carol Burnett Show” — a lineup of socially conscious shows that some critics have called the greatest night in television history.

It was also a singular year for movies and popular music; you could see “Chinatown,” “The Godfather Part II” and “The Conversation” at your local movie theater, and listen to new, career-defining albums from Jackson Browne, Joni Mitchell, Linda Ronstadt or Bob Dylan. All of it was produced in Los Angeles. As Ronald Brownstein writes in “Rock Me on the Water,” his in-depth tour of the city’s pop culture in 1974, “Those 12 glittering months represented magic hour.” He paints Los Angeles then as a kind of patchouli-scented version of Florence during the Renaissance.

These are not new stories, of course — the brief window of early-1970s creative filmmaking, the Laurel Canyon music scene, the golden era of television. All have been relentlessly examined, artifacts of a once-mighty baby boomer civilization. What Brownstein has done is expertly knit the scenes together, giving the reader a plus-one invite to the heady world of Hollywood parties, jam sessions and pitch meetings, as well as a pointed demonstration of how culture can be made and unmade. By the time we approach the end of that fascinating year, it’s clear that the creative frenzy is about to come to a screeching halt.

What was it about Los Angeles in the early 1970s that attracted so many creative people? It had always been a mecca for film. But now it drew young musicians, who felt free to experiment. Some wanted to escape the dirty decay of New York, which was on the brink of bankruptcy. Los Angeles offered not just sunshine and cheap housing, but something more elusive, and more explosive: hope that the social and political activism of the previous decade was yielding fruit. The city’s first (and only) Black mayor, Tom Bradley, had just been elected in 1973.

Brownstein, a political analyst for The Atlantic and CNN, who also worked for The Los Angeles Times for many years, is the author of several well-regarded books about politics. He points out that Richard Nixon resigned the presidency in 1974, just as 36-year-old Jerry Brown, promising a fresh vision, was elected California’s governor. (Brown went on to date Linda Ronstadt.) But this book is more interested in how politics and Hollywood ricocheted off each other. One chapter considers Jane Fonda and her left-wing political awakening during her marriage to the activist Tom Hayden. The earthquake they wanted to set off in Washington never came, while in the cultural realm, as Brownstein chronicles, America convulsed with change. More permissive attitudes about sex and drugs, a perception that the American dream was not only unattainable but rotten at the core — this new sensibility charged up the films, music and television that Los Angeles exported to the rest of the country, and the world. 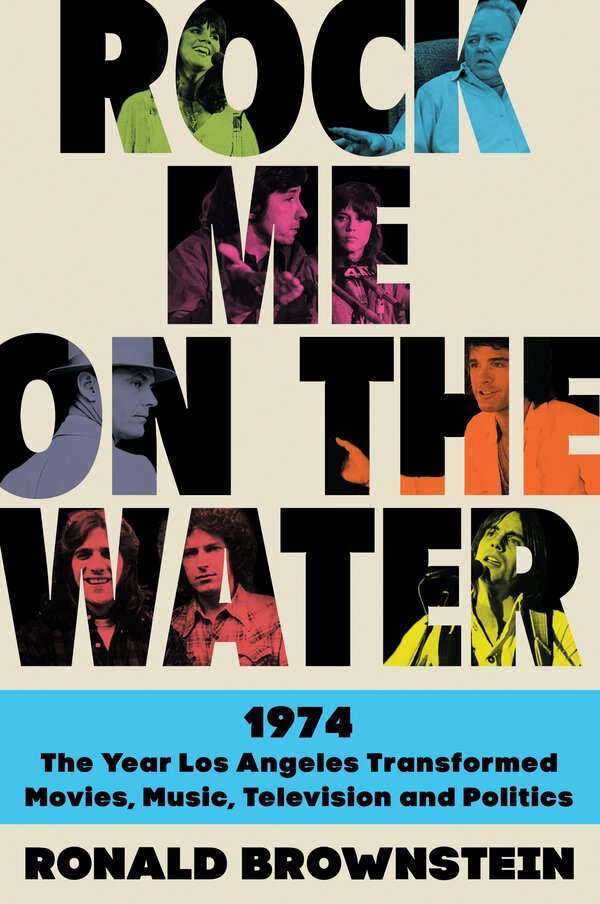 Brownstein is at his most convincing when describing the film and TV worlds, which produced the most radical assault on mainstream culture. “Chinatown,” for example, which was nominated for 11 Oscars, recounts the original sin of Los Angeles, that the city exists only because a handful of powerful men conspired to steal water from people who were not powerful. It was obviously a metaphor for Watergate (the film came out two months before Nixon’s ignominious departure back home to California), among other government misdeeds, but it also served as a kind of gravestone for 1960s optimism and the hope that positive political change was possible.

Music responded by turning inward. The Laurel Canyon musicians weren’t interested in scoring a revolution. They focused on themselves. Some of them, notably Joni Mitchell, were achingly poetic. The more successful bands, like the Eagles, trailed behind them a constant drug-fueled party, and as Brownstein points out, presaged the drift from political activism to personal pleasure that enshrined the 1970s as the Me Decade.

TV tried to have it both ways: Push the boundaries but still appeal to a broad audience. “All in the Family,” which perhaps more than any other show transformed TV into an art form people could take seriously, paved the way for other groundbreaking, top-rated shows: “The Jeffersons,” “Maude,” “Sanford and Son” et al. These shows, along with “Mary Tyler Moore” and “M*A*S*H,” took on socially conscious themes like civil rights, women’s liberation and the toll of war.

And yet no one will be surprised to read that behind the scenes, these shows did not walk the walk. Even when they were specifically about women and Black families, these programs were written, directed and produced by white men. Brownstein details the fights that Black actors had with Norman Lear to hire Black writers and directors. The “Sanford and Son” star Redd Foxx often complained about the lack of Black talent offscreen, while the star of “Good Times,” Esther Rolle, was furious that the character of her son, J.J., was turned into a racist stereotype by the white writers.

In movies and music, Black people had more control. In the early 1970s, Hollywood released around 200 movies centered on Black characters, which, in their success, helped avert a financial crisis for the industry. These so-called Blaxploitation films, which though allowing some creative autonomy also trafficked in racial stereotypes, featured powerful funk music by artists like War, Isaac Hayes and Marvin Gaye — music that was produced in Los Angeles, but had nothing to do with the Laurel Canyon scene. Just a few miles away, Stevie Wonder, Diana Ross and the Jackson Five were also recording massive hits at the Hollywood studios of Motown Records, which had moved from Detroit to Los Angeles. Yet, Brownstein notes, the white and Black music worlds rarely mixed. The Motown record label stayed, as he puts it, “defiantly disconnected from the white Los Angeles music scene.”

It’s unfortunate that Brownstein spends so little time exploring the Black film and music worlds. They’re discussed in just one chapter, into which he also stuffs the exclusion of women in Hollywood. Brownstein’s lens is focused squarely on what white men had to say in film, television and music, making the book itself a demonstration of that same problem. Even the stories of discrimination that the successful producers Linda Bloodworth-Thomason and Julia Phillips faced — plus Ronstadt’s uphill battle in music, which Brownstein presents with genuine outrage — feel like detours off the main freeway.

That freeway ends at the ocean, where a giant shark swims. A year after “Chinatown,” in 1975, Steven Spielberg released “Jaws,” featuring a policeman-as-everyman hero. The summer blockbuster was born, and the movie industry never looked back.

It was the beginning of the end for the idea that complicated movies commenting on society’s ills could be central to the culture, and even mainstream. The ’70s were morphing into long gas lines and inflation. Tired of confrontation, Americans just wanted to be entertained. TV obliged. After five years dominating the ratings, the Bunkers were displaced by another family, a happy family: the Cunninghams. And, just like that, we were back in the 1950s. “Happy Days” was the top-rated TV show in 1976.

Perhaps the most salient lesson of Brownstein’s engrossing book is that surely as day follows night, America devours its most provocative cultural expression and spits it back up, polished and unthreatening.