Everyone has those days where the whole plan is just to grab some snacks, plop down someplace comfy, and get lost in a Netflix show you haven’t seen yet. Whether you’re stuck at home for some reason or you just decided you needed a lazy day for yourself, nothing beats falling in love with a new show and marathoning the heck out of it. And since we can all use a good pick-me-up, these uplifting TV shows on Netflix are all great options for your next day on the couch, since they offer some much-needed respite from any of the bad stuff going on in the world.

Sure, there’s a time and place for all those dark, gritty dramas and nail-biting thrillers that are all over Netflix, but let’s be real: When you’re opening up Netflix on your day off after a stressful week, you just want to laugh at some jokes and maybe get in a good happy-cry, right? Thankfully, Netflix is fully stocked with a ton of sweet, heartwarming sitcoms, reality shows, and docuseries that are guaranteed to help you pass the time while also staying positive.

If you’re in need of a show to stream that will give you the warm fuzzies, then look no further than the list below:

Get ready to smile and happy-cry like never before, because Schitt’s Creek is a masterclass in giving viewers all of the feels with each episode. What began as a quirky fish-out-of-water comedy about a rich family who lost it all and were forced to live in a podunk town quickly evolved into one of the most beloved modern sitcoms, with a knack for packing an emotional wallop. All six seasons are on Netflix now. 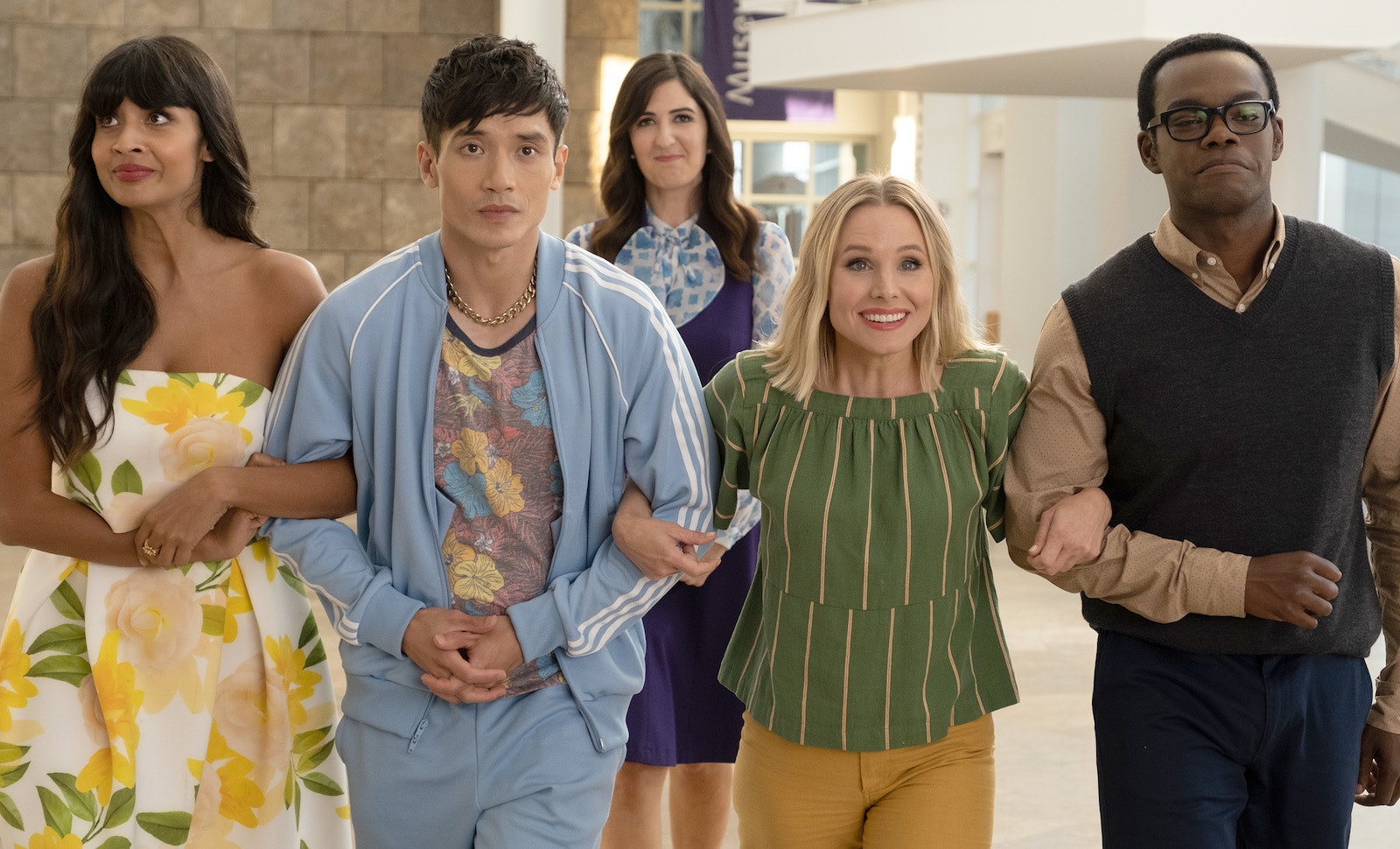 Want to ponder the great mysteries of life and death without getting super-depressed? It’s easier than it sounds: Just start streaming The Good Place. The one-of-a-kind afterlife comedy somehow manages to make moral philosophy not only engaging, but also incredibly fun and wacky. The show’s four seasons follow a group of recently departed humans as they navigate the increasingly complex realms of the afterlife. Trust me, it’s more silly and lighthearted than it sounds.

Most reality competition shows are pretty stressful to watch, as contestants compete with, manipulate, and backstab one another for a big prize. But The Great British Baking Show is the complete opposite of that. The long-running series has won legions of devoted fans for how kind the judges — and even the contestants — are. The show has that warm, calming energy you’re probably looking for right now.

Once you get just a couple episodes into Gilmore Girls, you’ll be ready to pack up your life and move to Stars Hollow. Sadly, the show’s picturesque small town full of quirky but supportive oddballs isn’t real, but there are seven seasons and a four-part revival to get lost in on Netflix, so there’s that.

Drag star Alyssa Edwards has given fans tons of joy with her memorable moments on RuPaul’s Drag Race, and her docuseries Dancing Queen goes even deeper to deliver tons of heartwarming moments. Not only do viewers get to see Alyssa put on stunning performances, but the show also provides an emotional look into Justin Johnson’s personal life, and also introduces a ton of talented young dancers from his dance studio in Texas. Think Drag Race meets Dance Moms… with less yelling and more heart.

A traditional sitcom made for modern audiences, One Day at a Time has the familiar, home-y feel that’ll instantly remind you of the shows you watched as a kid with your parents. The series is all about family, and although the Alvarezes tackle major social issues like immigration, sexuality, racism, and more, each episode ends with a heartfelt coming-together moment. Plus, it’s packed with jokes, so you’ll be laughing just as often as you’re happy-crying. 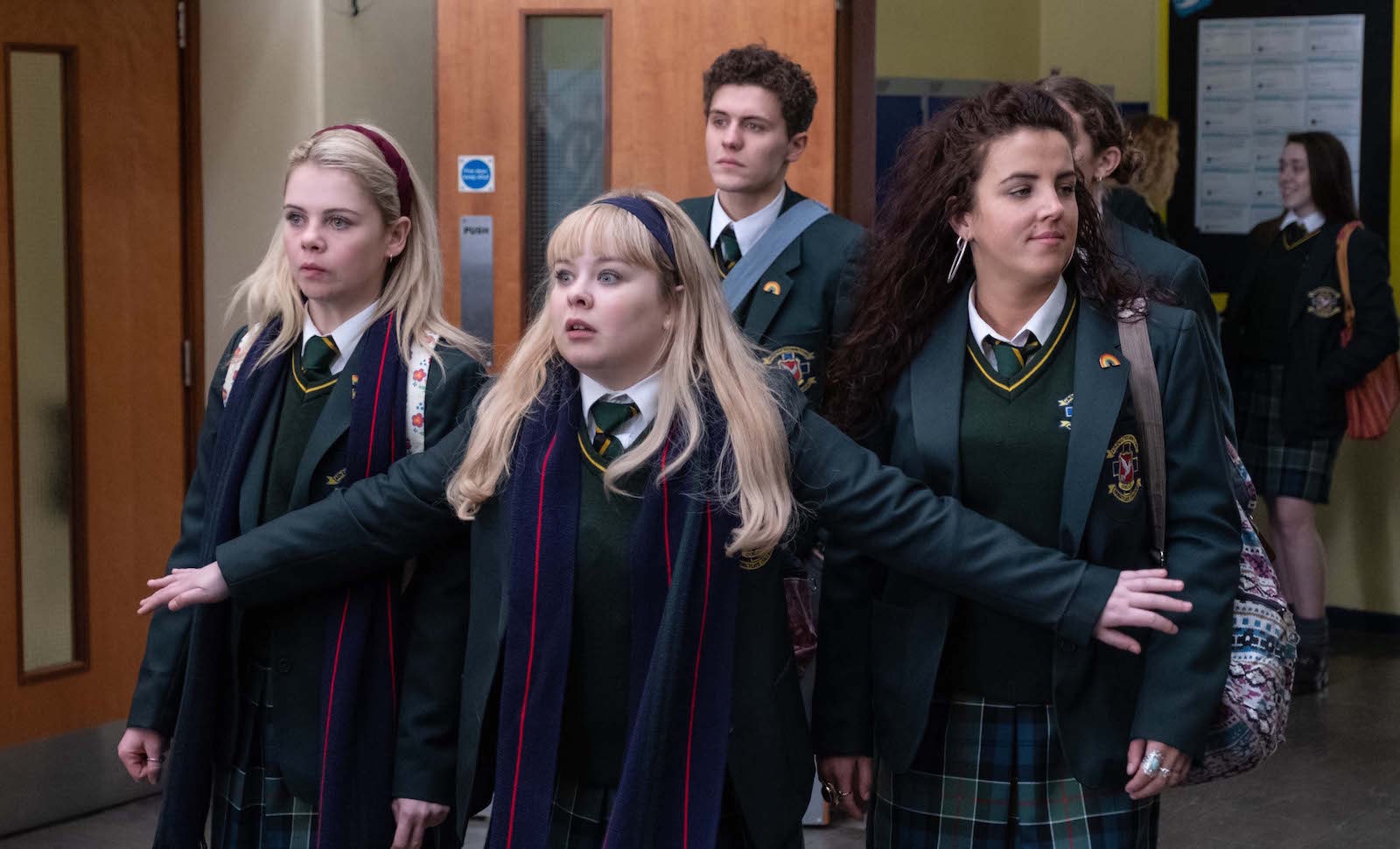 Your teen years are always awkward, and that’s what makes high school shows like Derry Girls so hilarious and relatable. The Irish comedy is a super-quick watch (each season has six episodes and it’s only two seasons long right now), but each episode is absolutely packed with laughs.

Everyone was talking about Cheer when it premiered in 2020, but if you happened it miss it back then, now’s the perfect time to start watching. The docuseries chronicles the ups and downs of the acclaimed Navarro College cheer team, and although there are a lot of dark, sad moments, by the end, you’ll be completely invested in all of the athletes and find yourself rooting them on from your couch.

For some people, crude humor is the best way to laugh away your worries, and the animated comedy Big Mouth is a master at combining gross-out jokes with relatable storylines. The show turns puberty into a menagerie of monsters, ghouls, and alternate realms, and its colorful depictions of universal awkward truths will give you tons to laugh about.

TBH, it doesn’t get more heartwarming than Jane the Virgin, especially for anyone who loves a good telenovela or romantic comedy. Since the series draws from and satirizes the telenovela genre, it is filled with hyper-dramatic moments (it’s originally about a virgin becoming pregnant due to a mix-up at a hospital, after all), but between all the wild twists, the Villanueva family’s love for one another, and Jane’s romantic life, will have viewers in their feelings every single episode.

Queer Eye is basically an injection of inspiration right into your veins. The rebooted series follows the life-changing journey of a different person struggling to fully love themselves as the Fab Five transform how they dress, groom, cook, live, and understand those around them. If you’re not crying at the end, you’re not human.

Sometimes, you just want to laugh at something totally goofy and absurd, and that’s just what Documentary Now! delivers. The series offers a comedic take on a different famous documentary with each episode, and even stars a bunch of huge names in hilariously strange roles: John Mulaney, Cate Blanchett, Owen Wilson, Jack Black, Maya Rudolph, and Aidy Bryant are among the guest stars.

Watching novice bakers completely fail at recreating impossibly lavish cake designs is actually a lot more uplifting than it may sound. That’s because nobody takes the competition too seriously, providing for a ton of self-deprecating jokes and laugh-out-loud funny creations that’ll have you in high spirits with each new episode. Add in the infectiously silly chemistry between hosts Nicole Byer and Jacques Torres, and you’ll find yourself giggling through season after season.

This article was originally published on March 18, 2020