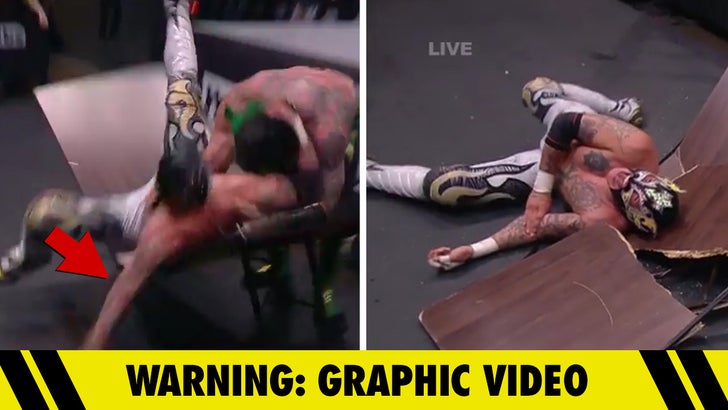 AEW star Rey Fenix suffered a horrific arm injury in the middle of his match Wednesday night … and — **HUGE WARNING** — the video of the incident is extremely graphic.

Fenix was wrestling against Jungle Boy and Luchasaurus in a tag-team event with his partner, Penta Zero Miedo, at AEW Dynamite … when the gruesome injury occurred.

Luchasaurus slammed Fenix through a table — and as the two wrestlers hit the ground, Fenix’s arm got caught in an awkward position and snapped backward.

Fenix was in an extreme amount of pain — video from the ringside angle shows he was screaming loudly after hurting the arm.

The 31-year-old was unable to finish the match — and he was reportedly rushed to the hospital.

No word on his condition today … but we’ve reached out to AEW for comment.

“Wishing a speedy recovery to @ReyFenixMx,” the wrestler wrote. “One of the very best in the world, and one of the greatest people. It’s always an honor to share the ring with you. Much love.”

Fenix is one of AEW’s brightest stars — he’s known for his high-flying aerial moves, and he’s a big-time crowd favorite.