Britney Spears’ former manager doesn’t think her restraining order against him is constitutional… but the court disagrees!

According to reports, a judge suspended a court hearing on Tuesday where Sam Lutfi fought the pop superstar’s request for a civil harassment restraining order. The temporary order against Brit’s former manager will stay in place until June 13, at which time the court will decide whether it can be extended for several more years.

Meanwhile, Lutfi has made his thoughts about the restraining order — which would bar him from coming within 200 yards of Spears and her family and prevent him from making “any disparaging public statements” about them — crystal clear.

“Would Mr. Lutfi face criminal prosecution if he publicly states that he does not like one of Ms. Spears’ songs? What if he simply states that one of her new songs is not as good as one of her old songs? What if Mr. Lutfi states something factually true about Ms. Spears, but it is potentially embarrassing? Something factually true cannot be defamatory, but it could be disparaging.”

Ironically, Lutfi previously alleged that Britney was disparaging him when she shared an Instagram post accusing him of writing “fake emails” amid her mental health drama — which he later denied on Twitter: 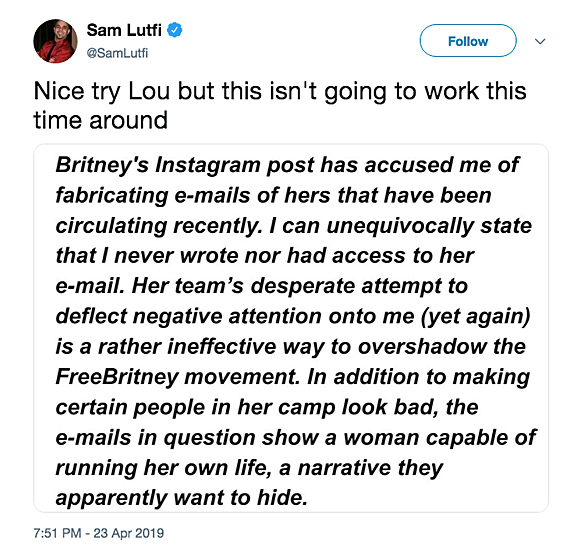 As we reported, the 37-year-old songstress filed for a restraining order against Lutfi on May 7, claiming that he sent harassing and threatening texts and tweets to Spears and her family, causing them “severe mental trauma.” Brit’s team also suggest that Lutfi is behind the #FreeBritney movement by allegedly writing “disparaging and threatening comments” on social media, and asking fans to “raise hell” to free Britney.

The court docs also accused Lutfi of sending Britney’s mom Lynne an “unhinged” text on April 29, accusing her of not being involved in her daughter’s conservatorship. Lutfi is even said to have sent Lynne $1000 in resources for legal “counsel”, which she reportedly did not accept.

In his response ahead of Tuesday’s hearing, Lutfi claimed that Britney has no evidence to prove that his messages and public tweets caused her actual emotional distress. He also claims he has not contacted Spears since 2009.

The Spears family has long believed that Lutfi — who worked with the pop princess in the early 2000s — is responsible for her downfall, and ultimately her breakdown in 2007.

Do U think this restraining order will be extended again at the next hearing?