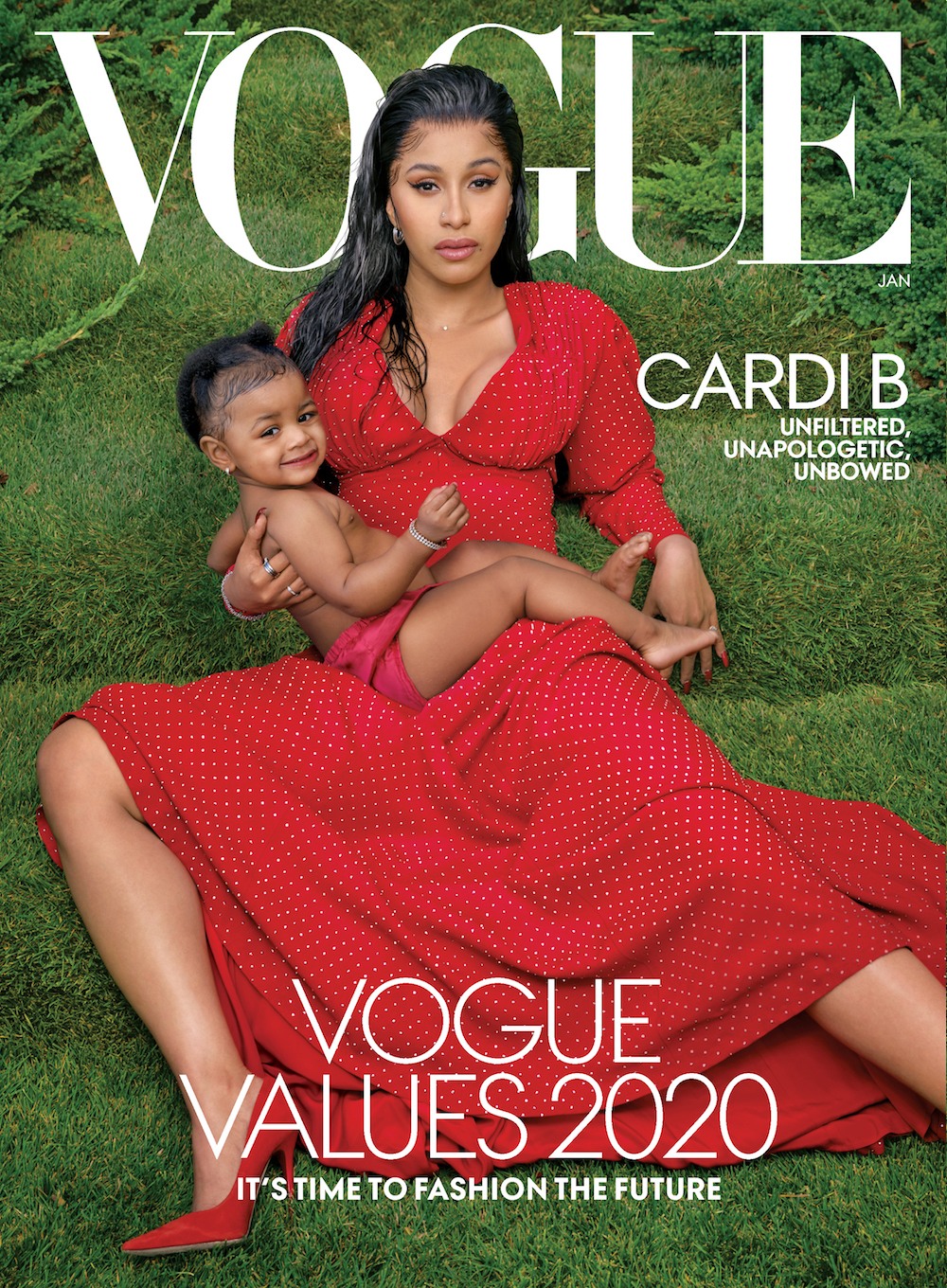 I get that Cardi B evokes strong feelings in a lot of people. Even though she’s said and done some problematic sh-t, I still like her and find her interesting though. I’m not a full-time Cardi stan or anything, but I love reading her interviews and she always gives a lot. She’s one of Vogue’s many January cover subjects, and look at little Kulture there on the cover too. It’s this thing Vogue did for their January issue – mothers and children, posed together on the covers, and one pregnant lady (Ashley Graham). Cardi’s Vogue interview is the best piece I’ve read so far from all the Vogue covers. She talks about music (she’s got a new album coming out soon), style (she’s into suits), sports (she supports the Red Sox), motherhood (she wants another kid) and tons more. You can read the full piece here. Some highlights:

On Offset & her marriage: “When me and my husband got into our issues—you know, he cheated and everything—and I decided to stay with him and work together with him, a lot of people were so mad at me; a lot of women felt disappointed in me. But it’s real-life sh-t. If you love somebody and you stop being with them, and you’re depressed and social media is telling you not to talk to that person because he cheated, you’re not really happy on the inside until you have the conversation. Then, if you get back with them, it’s like, how could you? You let all of us down. People that be in marriages for years, when they say till death do us part, they not talking about little arguments like if you leave the fridge open. That’s including everything.”

No one’s relationship is perfect: “My thing is, everybody on social media acts like relationships is perfect. And that’s crazy to me. I’m around so many women, and there’s always a woman talking about how she loves her man, but her man is not financially stable, or she has a problem with his mom, or the sex is not as good anymore. Everybody has issues. I believe in forgiveness. I prayed on it. Me and my husband, we prayed on it. We had priests come to us. And we just came to an understanding like, bro, it’s really us against the world. He has my back for everything, I have his back for everything, so when you cheat, you’re betraying the person that has your back the most. Why would you do that? We have come to a clear understanding. For me, monogamy is the only way. I’ll beat your ass if you cheat on me.”

On feminism & privilege: “Women always want to talk about feminism and supporting everybody, except if it doesn’t fit your category of what to support. Certain women that claim they are feminists only think that a certain type of woman should represent that. Like oh, you have to have a college degree, and you have to f–king be, practically, like, a senator or Mother Teresa or a Christian holy woman. No, you do not. Feminism means being equal to a man. And I am.”

She was never a prostitute: “I just hate when people be like, oh, you used to be a stripper, so you’re a prostitute, you used to f–k guys. I never used to f–k guys. The thing about it is, when you’re known as a stripper that f–ks guys for money, everybody hates you because you’re f–king up the game. You’re making guys expect more than what you should be giving, and the next bitch pays for it. I don’t have to give guys no ass. You want something from me? I want something from you. I want your money, you want my time. So I’m just gonna give you time. Once you start expecting more, my phone number’s disconnected. Bye.”

Her thoughts on the 2020 election: “It’s like, why is this such a successful country and we don’t have Medicare for everyone? It’s like, how are people gonna work if they’re sick? People gonna f–king be paying forever. And we don’t have freaking free schools? That discourages people to want to go to school if you gotta pay for it. Especially the way that social media makes it seems like everybody is the boss of something. Not everybody can be a boss. People gotta have certain jobs to keep things going. Let’s say I go to school for my job, and my school bill is more than I’m gonna be paid for. Then I’m not gonna want to do that job. So it’s like, who’s gonna do that job? It discourages people from wanting to learn.”

These were just the parts which I found interesting, but there are at least three more pages full of quotes I could have included, like her thoughts on the pressures of delivering a new sound and how she thinks that “twerk-twerk” music might just be a fad. I obviously included the Offset stuff because… that dude is still cheating on her. And it makes me sad for Cardi, because I get what she’s saying too: she still loves him, even though he cheats. He still makes her happy. And despite all the tough talk, she’s not leaving or beating his cheating ass. Also: love what she says about feminism and Trump.

Here’s Cardi’s Vogue “73 Questions” feature. Maybe it’s because Kulture is there, but Cardi is so SOFT here. She’s in mom-mode.