Much like Dolly Parton, “American Idol” star Carrie Underwood comes off as one of those rare celebrities who can do no wrong in the eyes of fans from all across the political spectrum. However, something the musician did on social media had one critical Twitter user tweaking the lyrics from one of her hit songs: “Maybe next time she’ll think before she tweets.”

What Underwood’s followers are used to seeing on her Twitter page are promotions for merchandise like CDs and T-shirts, pictures of her performing, sweet family photos, and exciting career updates, like her GMA Dove Award nominations. She rarely seems to receive negative feedback from her followers and is far more likely to be inundated with praise each time she tweets. For example, when the “Drinking Alone” hitmaker shared a photo of herself purchasing a copy of her “My Gift” CD at a Target store last December, fans didn’t just love seeing her shopping at Tarjay like a normie — they were also overjoyed that she was masked up in a fabulous sequined version of the protective facial accessory. “Thank you for ‘masking up’ to protect yourself and others… ‘Love Thy Neighbor,'” wrote one fan. “Your mask is so pretty,” another tweet read. However, when Underwood appeared to share her opinion on kids masking up, some people were less than thrilled. 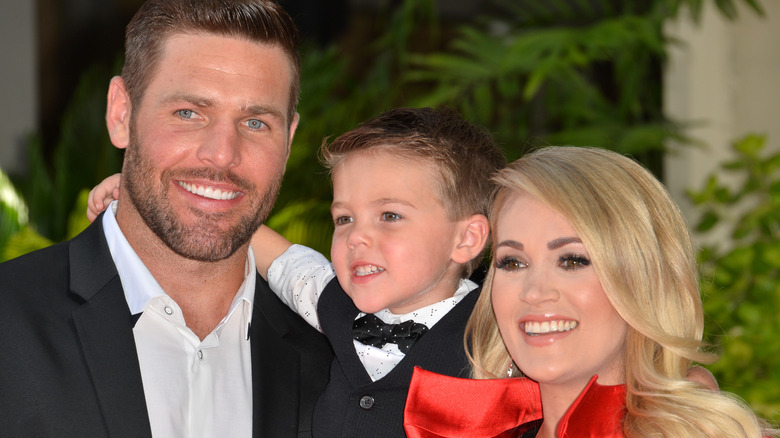 Some of Carrie Underwood’s Twitter followers noticed an out-of-character like for the country star, who is known for being caring and considerate. It was a video of conservator commentator Matt Walsh speaking in front of the Nashville School Board. He complained about the school’s mask mandate, dramatically opining that kids were wearing “muzzles like rabid dogs.” He also claimed that “COVID poses no risk to our kids at all,” even though a record number of children have been hospitalized with COVID-19 in the United States, per Reuters.

Twitter likes aren’t always endorsements, and it’s possible that Underwood’s was a mistake. However, many netizens didn’t give the mother of two the benefit of the doubt, and some shade was thrown. “Worst move she’s made since The Sound of Music,” wrote one critic. “Jesus take her phone,” read another message. “She took a Louisville slugger to all her ‘likes,'” tweeted a third person. Meanwhile, Walsh took full advantage of the attention he was getting by firing off multiple tweets about the controversy. “Carrie Underwood liked my video and now the mob is coming for her,” he wrote. “She should know better than to like something that they don’t like. This is an unforgivable sin.” Underwood’s controversial like came after her husband, former NHL player Mike Fisher, seemingly outed himself as an anti-vaxxer by sharing an Instagram post that fact-checkers designated as “false” because, contrary to what it claimed, “COVID-19 vaccines are effective at preventing illness.”