For rent, spacious holiday let with spectacular views, not suitable for vertigo sufferers. Pets welcome (no responsibility is taken for tragic animal accidents). Guests are advised to keep mirrors covered at all times.

No wonder His Excellency the General is having trouble finding tenants for his Himalayan palace in Black Narcissus (BBC1). Shutters bang open and doors slam. Cats drop dead. The caretaker puts out bowls of milk for the resident ghost and the property comes with a zombified yogic holy man.

Ambitious Sister Clodagh is determined to take no notice of all this fol-de-rol, as she and her four nuns set up a Christian mission school, named St Faith.

The Sister Superior is played by former Bond Girl Gemma Arterton, who was Strawberry Fields in the forgettable Quantum Of Solace (she might wish this fact wasn’t always trotted out but of course she will be Strawberry Fields for ever). 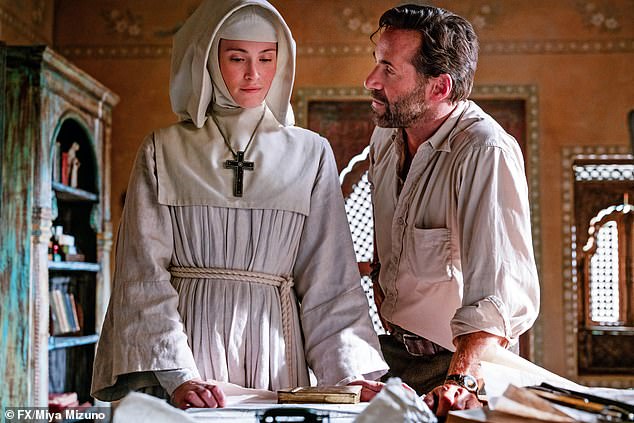 Ambitious Sister Clodagh is determined to take no notice of all this fol-de-rol, as she and her four nuns set up a Christian mission school, named St Faith

The Palace of Mopu on India’s border with Nepal was once the home of the local maharajah’s concubines. In 1914, his deranged daughter threw herself from the bell tower into the ravine, and now, 20 years later, her restless spectre stalks the corridors, popping up in mirrors like a sort of reverse vampire.

‘Truth to tell,’ murmurs the General (Kulvinder Ghir), ‘I never liked this palace.’

No-nonsense Clodagh refuses to be distracted by this, and when highly strung novice Ruth (Aisling Franciosi) starts babbling about seeing the dead, she gives her a stiff smack around the wimple.

But even Clodagh can’t remain oblivious to the devilish charm of Mr Dean, played by Alessandro Nivola. Mr Dean flirts with all the nuns, a cigarette clamped between his lips like a sexy Andy Capp. Ruth goes weak at the knees every time he glances her way.

The Sister Superior too finds herself fantasising about riding through sunlit meadows and skinny-dipping in lakes, and I don’t think we need Doctor Freud to tell us what that’s all about.

If you haven’t seen the Oscar-winning 1947 movie with Deborah Kerr, this adaptation of Rumer Godden’s novel feels original and surprising – an erotically charged combination of a psychological horror movie and Call The Midwife. In one scene the ladies are teaching local rapscallions, in the next they’re having hot flushes over the fading harem murals.

And all of them are drawn to the stone staircase that clings, with no balustrade, to the side of the palace above a sheer cliff. It’s the only way to the bell tower and nuns do need to ring a bell regularly. You’d think that ne’er-do-well Mr Dean could at least fix up a wooden rail.

The strangely named Black Narcissus continues tonight and concludes tomorrow. It’s easily the best thing that’s been on over Christmas. Even if you’re not a fan of ghost stories, it’s worth watching for the stunning scenery. Shot partly on location in Nepal, it has a backdrop of mountains so vast that they seem too big to fit into the sky. 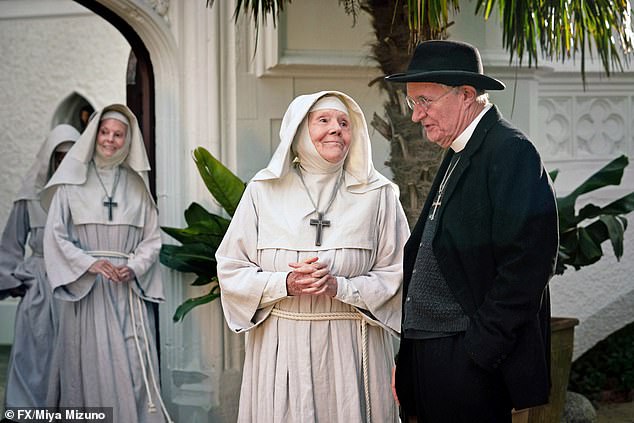 Jim Broadbent has a cameo too, playing a priest feigning a fever to get out of the posting

It also features the late Dame Diana Rigg in her final TV role, briskly puncturing Sister Clodagh’s snooty attitude, before dispatching her to the frozen north, by announcing that nobody thinks she’s up to the job.

Jim Broadbent has a cameo too, playing a priest feigning a fever to get out of the posting.

Walk-on parts for ageing telly titans can make a bad production worse: Orson Welles used to do a lot of them, his presence signalling that the budget had been wasted before filming even started.

But the appearance of these two stars in the opening scenes was well judged, reassuring us that this unusual story had an underpinning of high standards and attention to detail.

Rosie Cavaliero, Karen Bryson and Patsy Ferran are the other missionaries, tightly wound in their coarse cotton habits. When they lay down to spend their first night on the stone palace floor, their heads and bodies bound in white cloth and they looked like medieval plague corpses.

Despite the strength of the cast around her, it’s very much Miss Arterton’s job to carry the drama. Sister Clodagh’s self-confidence has been slashed away by the Mother Superior’s prediction that she’s too self-centred and too inexperienced to cope.

The smallest threats to her authority leave her quivering with anger. Even the failure of the indoor toilet to flush is taken as a personal affront. So when Mr Dean saunters around the muddy courtyard, whistling insolently and reviving primal emotions she thought were buried, the poor woman is bound to be flustered.

The locals all exchange knowing leers. This place used to be called the House Of Women, and licentious wantonness has soaked into its walls. Ankle-length robes and a wooden crucifix are no protection against that.

The House Of Women would make a better title than Black Narcissus. For that matter, so would The Concubine’s Ghost, Death Of The General’s Sister – or, if you wanted to go full Mills & Boon, how about The Heights Of Forbidden Passion?

But forget the name. Everything else about this is wonderful.