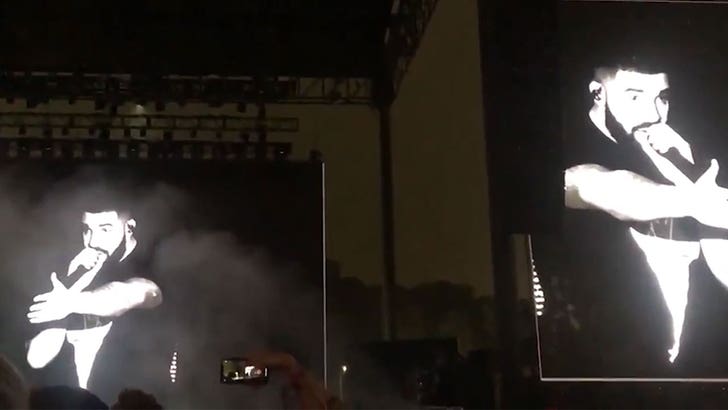 Rough night for Drake, who got booed off stage at his pal Tyler the Creator‘s music festival … due to a crowd that clearly wanted, and expected, to see someone else.

Champagne Papi came out as the surprise guest headliner Sunday night at Camp Flog Gnaw, which was held at Dodger Stadium. It sure seems like folks were jonesin’ for Frank Ocean to the hit the stage and sing … instead, they got Drizzy rapping.

The set didn’t seem to be going well from the jump — barely any energy from the audience, and what’s worse … when Drake offered to stay longer, the crowd didn’t want him.

It seems like he heard ’em loud and clear … Drake thanked the Flog Gnaw festivalgoers for their time and made his way off stage — seemingly cutting his set short. No love lost between him and the mob either, because they chanted for Frank after Drake left.

As for why this happened to one of the biggest music acts in the world right now … it might have something to do with the type of music these ticket holders are into, and who else was in the lineup — tons of alternative hip-hop and R&B artists.

Safe for a handful of guys who can crossover to the mainstream — DaBaby, 21 Savage, Juice WRLD, YG, etc — the majority of the acts cater to a bit of a more indie listener. Ditto for Frank Ocean, who’s the king of that whole genre right now.

Meanwhile, Drake is as mainstream as it gets. ‘Tis what it is. 🤷🏽‍♂️