EastEnders star Linda Marlowe on her four marriages, drug running, and trapezing at 80 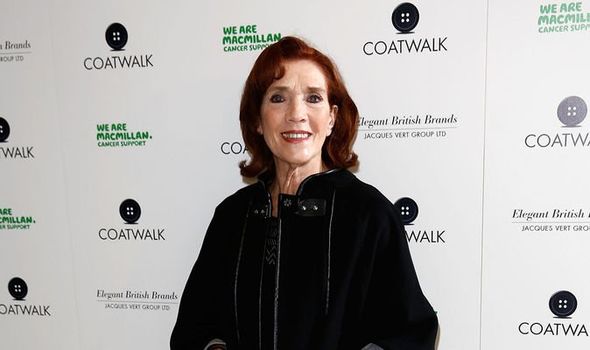 In a north London community centre, Linda Marlowe is swinging through the air with the greatest of ease. While most of us used lockdown to perfect our banana bread recipe, the former EastEnders star has been polishing her trapeze act. And the wonder of it all is that she’ll celebrate her 81st birthday on July 26.

In No Fear!, her one-woman show at east London’s historic Hoxton Hall in September, Linda portrays a 100-year-old circus performer, sharing the vicissitudes of her remarkable, if sometimes rackety, life. But this is no fiction: as it transpires, the entire content of the show charts Linda’s own eye-popping story of sex and drugs and rock ’n’ roll.

An only child, she was born in Sydney to an actor father who co-owned a theatre company with the late actor and award-winning star of Network, Peter Finch. On a visit to Australia, Laurence Olivier and Vivien Leigh were much taken with Finch. “In fact, Vivien had an affair with him,” says Linda.

The Oliviers lured Finch to England, and he invited Linda’s parents to follow him to the UK. A bored 10-year-old on the long train journey from Liverpool to London, Linda struck up a conversation with a young man.

“I told him I loved dancing and he said his mother ran a dance school, the Hampshire, in Knightsbridge.” It turned out his younger sister was the actress Susan Hampshire.

Linda persuaded her mother to enrol her and she stayed for three years. At 14 – “although with make-up I looked older” – she sent off a photo to Pinewood Studios, telling them she was 18.

“I was given a screen test with David McCallum (star of The Man From Uncle) for a film called Robbery Under Arms,” she recalls.

She didn’t get the part but she’d caught the acting bug and later won a place at the Central School of Speech and Drama. In her first term, she met and fell in love with RADA student, Bill Marlowe, ten years her senior. They married just shy of her 18th birthday; their son, Ben, was born when she was 20. He’s now a Baptist minister.

“I did love Bill but the marriage was emotionally abusive,” says Linda. “He was a depressive who drank. I would have left him earlier but both his parents had committed suicide and I didn’t want the same thing happening to him as a result of me leaving.”

They finally parted when Ben was ten. “The divorce was illegal but you’ll have to come and see the show to find out why,” she teases, eyes twinkling.

After a string of TV roles in dramas such Z Cars and Emergency Ward 10, Linda opted to learn the theatre ropes in weekly rep and was introduced to avant-garde actor/director, Steven Berkoff.

“I joined his company which proved to be a baptism of fire,” she recalls. “He was a brilliant director but always so horrible to me and two other girls, putting us down in front of the rest of the cast, so we decided to leave.

“And so I became a rock chick. We formed an anti-men punk group called The Sadista Sisters. We broke up after one album and three-and-a-half years.”

Her second husband was a Yugoslav called Nino who she only married, she says, so he could stay in Britain.

“I was based in London and he was living in Holland,” she says of their split after six years. “He’s a really nice guy and we’ve remained good friends.”

But she was soon on to husband number four – tying the knot about 48 hours after their first meeting.

Linda was in a play in LA. “Juliet Mills (the English film star) and her husband came to see the show with an actor called Christopher McDonald,” she recalls.

“They told me I should base myself in LA. But I had a young child at home. ‘No harm in getting a green card’, they said, which would allow me to work in America.

“The solution was to marry an American. At which point, Christopher piped up, ‘Well, I’ll marry you’. We talked about it the next day and decided to fly to Las Vegas where we gambled all night, the winnings paying for the wedding.”

The night before the ceremony, they also became lovers.

“Obviously, this wasn’t a love match although we consummated the relationship, such as it was,” shrugs Linda, matter of factly. “But that was pretty much it. It was to all intents and purposes a marriage of convenience.” They remained friends though and Christopher joined Linda back in the UK for a while but his career – and love interests – were in America.

“He rang me up and said, ‘Wifey, we need to get a divorce. I’ve met someone and she’s pregnant.’ I didn’t mind a bit.”

There have been “a few little affairs along the way” but there’s been no one serious for years now. “I don’t care,” she smiles. “I’ve had my fair share of sex. I was a wild child after Bill.”

And that wasn’t just her love life… she was a risk taker when it came to earning money too. “I was at a party and this guy said he’d pay me £200 – about £3,000 in today’s money – if I took a stash of marijuana to Washington DC,” she recalls. “I had school fees to pay so I agreed.

“In the event, I had nine kilos of hash strapped to me. There was no frisking at airports but I was so hot. The passenger next to me couldn’t understand why I wouldn’t take off my coat. I wasn’t caught, though.”

Linda sailed through customs – with the drugs still strapped to her – hailed a taxi and headed off to the address she’d been given for the drop off.

“I handed over the drugs to the contact whose name I’d been given and he gave me the agreed ‘fee’ in return. He wanted me to smoke pot with him so we could discuss me doing the same trip again – effectively to become a mule – but I was having none of it. I turned right around and headed back to the airport for a flight to London, never to repeat the exercise again.”

Back in London she worked with Steven Berkoff on a play he’d written called Decadence, which was a great theatre success. But when it came to be turned into a film, studio bosses vetoed Linda as leading lady. “I wasn’t box office,” she sighs. In the end, the part went to Joan Collins.

“A great beauty, but it was truly awful. It closed after five days which I found kind of satisfying.” Her next big role may not have led to movie stardom, but it certainly led to fame, of the TV soap variety.

When her agent rang offering the role of Alzheimer’s sufferer Sylvie Carter, mother to Shirley and Tina, in EastEnders, she says, she didn’t hesitate.

“I’d always turned up my nose at soaps. But I was 74 by then and it was a good meaty role,” she admits.

“I was there, on and off, for three years before she electrocuted herself when a DVD player fell in the bath.”

It was a bit of a surprise for Linda that after decades in the business, and never being out of work, it was EastEnders that made her a star.

“But that’s the power of TV, isn’t it? I’d worked as an actress for more than 50 years when I got the part and no one had ever recognised me. Now, even today, over four years later, people will call out ‘Sylvie’ in the street when they see me or smile in the supermarket and say hello because they feel they know me.”

Linda played the estranged wife of Timothy West, whose role must have been traumatic. “I felt so sorry for him,” she says. “During the day, he worked with someone suffering from dementia and then went home to his real-life wife, Prunella Scales, who has dementia for real.”

But she says it was a happy time in her career. “I got on with all the cast, including Danny Dyer who played Mick Carter, the new landlord of The Queen Victoria pub (and Sylvie’s soap son, or so he believed).

“With the exception of Annette Badland, who played my sister, Aunt Babe, I’d never met any of them before. I particularly liked Danny who, along with Kellie Bright, really made me feel at home from the off.

“And my respect for soap actors rose out of all proportion: they work really hard and at such speed,” says Linda.

Retirement, of course, is out of the question. “To retire gracefully or keep on going? I choose the latter. I’ve had a wonderful career because of its variety.”

With the colour, excitement and extremes of Linda’s life, it was obvious to her that it should be portrayed through the guise of a daredevil – a trapeze artist.

“Friends kept telling me my life had been so rich and varied so I decided to turn it into a one-woman show,” says Linda who admits that by funnelling her story through a fictional character she is building in some distance – but of course never playing it safe.

“I felt a show called No Fear! should neatly end with an older woman performing trapeze stunts, a woman taking risks.”

And how does a woman her age remain so astonishingly agile?

“Ballet as a girl,” she says, “and Pilates as an adult. My core and upper thighs are as strong as iron.”

And now she’s mastered the trapeze could that lead to a new chapter in her career? “Never say never,” she laughs… which has pretty much been her motto in life.
Source: Read Full Article