Beyoncé and Jay-Z invited Ed Sheeran and then-girlfriend Cherry Seaborn out to a restaurant after the superstars attended one of his NYC shows.

Ed Sheeran revealed that he and wife Cherry Seaborn ended up on a double date with Beyoncé and Jay-Z! The British singer, 30, shared details of the wild tale during an interview with Apple Music 1’s Rebecca Judd — revealing it was just after his first date with Cherry! “I learned [Jay-Z’s song ‘Empire State Of Mind‘] for a Live Lounge. And then Jay-Z and Beyonce came to a gig that I did in Brooklyn. And they were like, ‘Come out to this restaurant with us afterwards,” Ed began.

Naturally, he and Cherry went along with the superstar “On The Run” duo.  “So I went out to this restaurant and then my mates were in town. Actually my now wife. It was like the day after we’d had our first date,” he recalled, revealing a couple other friends were in town. “So we went to dinner and then we went to this bar and I remember a guitar was getting passed around between me and Foy. And I remember playing [‘Empire State of Mind’]. Five of us in a room with Jay-Z and Beyoncé. I gave Beyoncé a Jägerbomb,” he hilariously added. 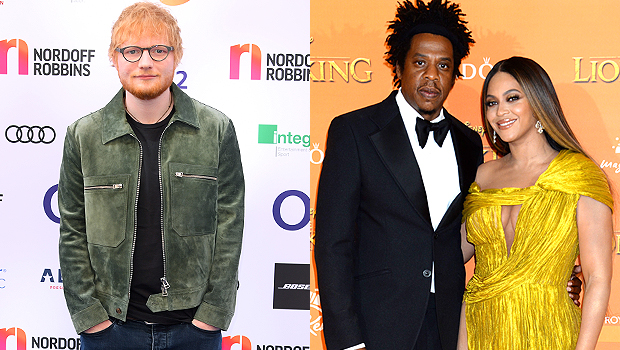 Beyoncé and Ed collaborated on a version of his iconic song “Perfect Duet” back in 2017. Ed previously shared that the Destiny’s Child alum made the choice to make the song acoustic guitar only, which is how Ed had written it in its early stages. “[She] went in [to the recording studio], one take, came out,” he shared at the time to ET, revealing that the two went back and forth for four hours before laying down her vocals. The single was a massive success, hitting the top spot on the coveted Billboard Hot 100 list in Dec. 2017.

These days, dates are looking a little more low key for Ed and Cherry, who are also parents to Lyra Antarctica, 1. “Me and my wife have a date night. It’s a strict date night every single week. And no matter who’s in town or who wants to see us, it’s always this one night in the week and we go out and our rule is we can’t talk about our baby,” he explained. “We have to talk about each other and catch up because if you spend… As a parent, you spend so much time discussing being a parent that you kind of forget who you were before. So we have one night a week where we are who we were before,” he also shared.