Fans are showering Dog The Bounty Hunter with love and well wishes following the news of his wife Beth Chapman’s passing.

As we reported, the 51-year-old sadly lost her battle to throat cancer on Wednesday in a Honolulu hospital, where her final moments were spent surrounded by loved ones.

Dog confirmed his wife’s death in an emotional message with fans on Twitter, writing:

“It’s 5:32 in Hawaii, this is the time she would wake up to go hike Koko Head mountain. Only today, she hiked the stairway to heaven. We all love you, Beth. See you on the other side.”

The announcement sparked a flood of support from fans on social media, with many paying tribute to the fierce, badass woman Beth was throughout her career.

Read some of the heartbreaking reactions (below). 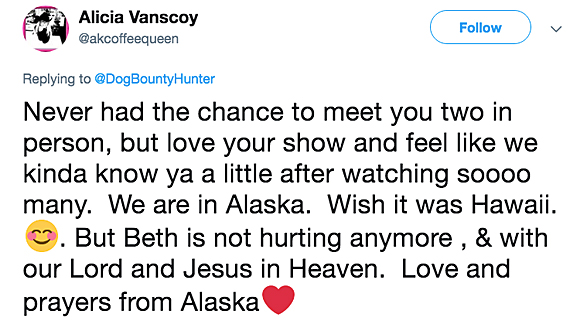 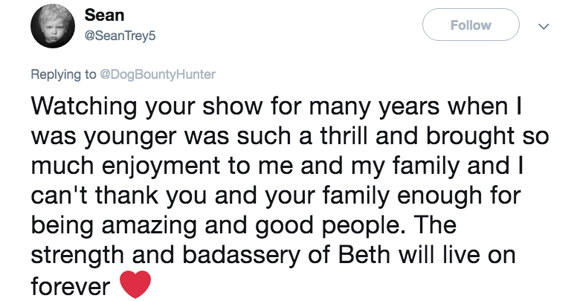 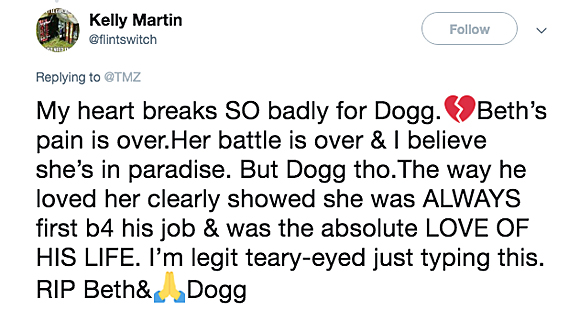 The reality starlet had been fighting the aggressive disease ever since she was diagnosed with stage II throat cancer in September 2017. She even beat the illness for a while after having the cancer removed, but, unfortunately, it returned in 2018 and forced her to go back into treatment.

Despite recently undergoing an aggressive series of chemotherapy treatments, Beth was hospitalized on Saturday due to having difficulty breathing as well as choking. She was placed into a medically-induced coma and was kept comfortable in the days leading up to her untimely death.

As fans will know, Beth’s health battle was supposed to be a major storyline in the couple’s upcoming show Dog’s Most Wanted, which they had been filming before Beth’s condition took a turn for the worse.

It’s unclear what will happen to the reality show, which was slated to be released in 2020, but we hope it will honor the mother-of-four’s memory. As you can see, there’s a lot of love out there for Beth the Bounty Hunter.