Garth Brooks' inauguration performance gets rave reviews: 'All the feels' Garth Brooks warmed the hearts of viewers at the inauguration ceremony of President Joe Biden and Vice President Kamala Harris on Wednesday.

Shortly after 12 p.m. the country star, dressed in a black blazer and blue jeans, removed his staple cowboy hat as he approached the stage in Washington D.C. before a small crowd. The 58-year-old entertainer then performed an a capella version of “Amazing Grace.”

As he approached the song’s final verse, Brooks captivated viewers with his request for them to sing along.

“I’m going to ask you to sing this last verse with me. Not just the people here, but the people at home, at work, as one, united,” he said.

CELEBRITIES AT BIDEN’S INAUGURATION: FULL LIST OF PERFORMERS AND GUESTS 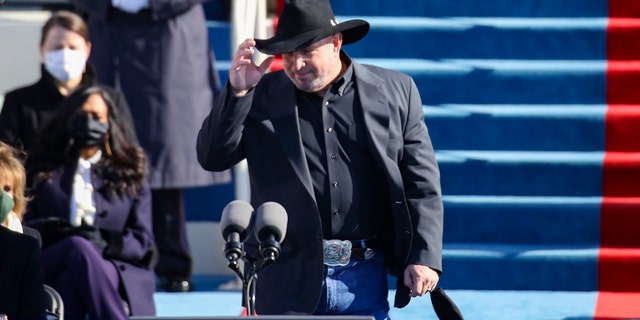 Garth Brooks performs at the inauguration of U.S. President Joe Biden on the West Front of the U.S. Capitol on January 20, 2021 in Washington, DC. During today’s inauguration ceremony Joe Biden becomes the 46th president of the United States.
(Rob Carr/Getty Images)

The crooner’s performance received a majority of rave reactions from fellow stars and fans at home.

“hats off to @garthbrooks for putting our country first,” Jimmy Kimmel tweeted.

“Am I singing along w @garthbrooks? You betcha. #AmazingGrace,” wrote actress Elizabeth Banks.

One Twitter user said Brooks “took us to church.” Another penned: “Garth Brooks giving me all the feels today!”

“Can @garthbrooks sing #AmazingGrace at my funeral, please?” another joked.

One person said Brooks’ performance brought them to tears. “You singing at the inauguration made my day,” the person added.

“I just sang Amazing Grace with Garth Brooks, out loud in my car,” one said.

“My Deaf Mom loved @ladygaga @JLo  and @garthbrooks – tho she could not hear them sing, she felt the emotion!” another reacted.

Others reacted to Brooks’ display of camaraderie with past presidents, including Barack Obama and George W. Bush.

“garth brooks fist bumping and hugging a bunch of presidents on inauguration day we love to see it,” said one viewer.

One person thought he was a bit too touchy, however. “Garth Brooks acting like a kid in a candy store and putting his hands on everyone,” the user quipped.

Brooks confirmed earlier this week that Dr. Jill Biden called him personally to invite him to perform.

“I’ve played for every president there is, since Carter, with the exception of Reagan. This is an honor for me to get to serve… and it’s one of the things that, if my family is around, no matter who the president-elect is, it’s an honor to be asked,” he told reporters.