How Streaming's 'Rapid Growth' Has Americans Spending More Than Ever Before SVOD spending spiked 17% between the beginning and end of 2020, data from Ampere Analysis reveals

Been spending more on streaming? If so, you’re not the only one.

“During the past year we have seen rapid growth,” Ampere senior analyst Alexios Dimitropoulos told TheWrap. 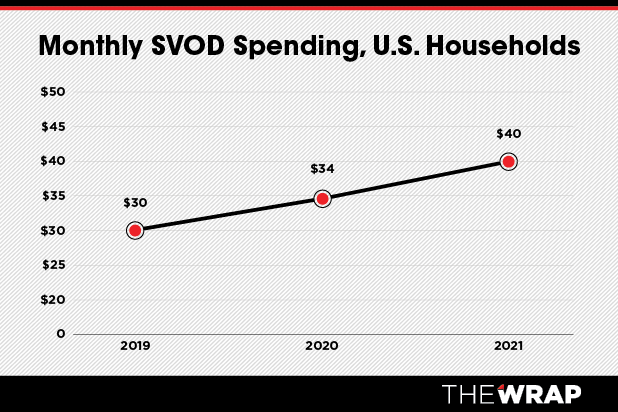 Much of that can be attributed to the coronavirus pandemic. With theaters and concert venues closed down, people have relied even more on streaming to keep them entertained while sitting on the couch. Executives at Netflix, which announced last week it added 37 million new subscribers during 2020, setting a new company record in the process, have acknowledged as much in their recent quarterly earnings reports. Still, there are other factors at play behind streaming’s rise.

“The main factor behind the rapid growth is the launches of new SVOD services,” Dimitropoulos said. “Since Q3 2019, we have witnessed the launches of the direct-to-consumer OTT services of big US studios including Disney+, HBO Max and Peacock and also the launch of Apple TV+. Launching offers and bundles created with these new services all influenced the high uptake and the increase on services the average SVOD household now has. For example, Apple TV+ became available to new Apple device owners, while Hulu and ESPN+ saw an increase on the back of new Disney+ bundling.”

It’s not rocket science. With more big-name streaming services on the market, customers are looking to try out new options — especially during the pandemic. At the same time, those two factors have been amplified as cord-cutting — a trend that was already gaining steam before the pandemic hit — has accelerated during the pandemic. Customers still want to watch TV, but without the pricey and lengthy contracts that come with traditional cable and satellite providers. Add those factors up, and you can see why Americans are willing to spend more on streaming than ever before.

Right now, the five biggest streaming services in the U.S. — Netflix, Amazon Prime Video, Hulu, Disney+ and HBO Max — have a combined 225 million subscribers in the U.S., according to Ampere. Netflix, with nearly 74 million customers in North America, remains the top dog domestically, but it’s now facing real competition. In December, Disney shared Disney+ had 86.8 million global customers a little more than a year after debuting — putting the company years ahead of schedule, considering Disney was aiming for 90 million SVOD customers by the end of 2024.

Moving further into 2021, Dimitropoulos expects Americans will continue to see their SVOD spending increase, albeit at a slower pace than 2020.

“With the ongoing cord-cutting, pay TV spend is declining, leaving room for spend on SVOD services to grow,” he said.

Other reasons include the continued rollout of new services, with Paramount+ and Discovery+ both set to debut this year, and streaming services hiking their prices. Netflix recently did this, and Disney+ will go from $6.99 per month to $7.99 per month in the U.S. starting in March. The data is clear — Americans are spending more money on streaming, and also subscribing to more services overall — and that doesn’t look like it’s changing anytime soon.