Home » Celebrities » Jimmy Carr admits his father is 'dead to me'

Jimmy Carr admits his father is 'dead to me' ‘My father is dead to me’: Jimmy Carr reveals he refuses to have his dad in his life – after 21 years of not speaking, harassment legal case, gig ban and ‘chilling’ ambush reunion

Jimmy Carr has declared his father Jim is ‘dead to him’, following the duo’s 21 year estrangement, which has included a harassment case and a ban from his gigs.

The comedian, 49, recently confirmed he is a first-time dad after welcoming a son Rockefeller with his partner Karoline Copping in 2019 and he has now shed light on his own parental relationships in the wake of his bundle of joy.

Speaking on Rob Beckett and Josh Widdicombe’s Parenting Hell podcast, Jimmy told how he wants to have a healthy relationship with his son as he didn’t have such a bond with his own dad, who he previously accused of harassment.

In his candid insight into their lack of relationship, Jimmy said: ‘It’s not a secret, I haven’t seen my dad in 21 years and you know the line, ‘My mother’s dead and my father’s dead to me’ – which sounds very cold, until you meet the guy.’ 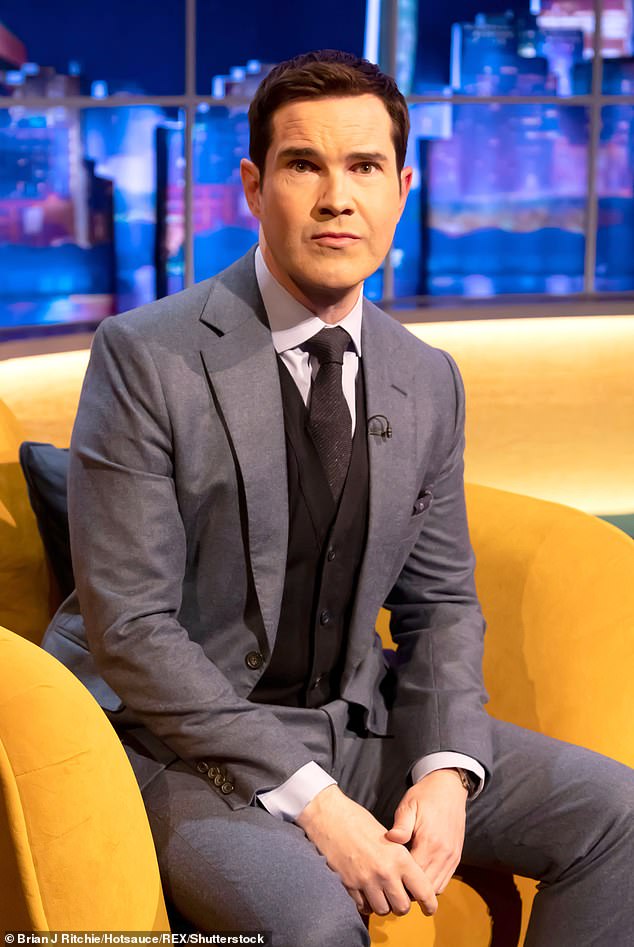 Candid: Jimmy Carr has said his estranged father Jim is ‘dead to me’ after not speaking to him for 21 years (pictured in April 2021)

On his dad, whose full name is Patrick James Carr, Jimmy continued: ‘It’s a weird thing where I’m acutely aware that things don’t always work out. I’m aware that sometimes it goes the other way and that could be terrible. There’s no bitterness and there’s no anger there.

‘I want the best, I just can’t have that guy in my life.’

Jimmy admitted he sometimes worries what kind of relationship he might have with his own son when he grows up, given his own history.

He said: ‘There’s a bit of sadness there and you worry, ‘Could something go wrong with my kid?’ You want to prevent that, but it’s hard. I think it’s about being a father and being that figure for him but not in any way controlling.’

Jimmy’s mother Nora died in September 2001 and he hinted his relationship with his dad turned sour around this time. 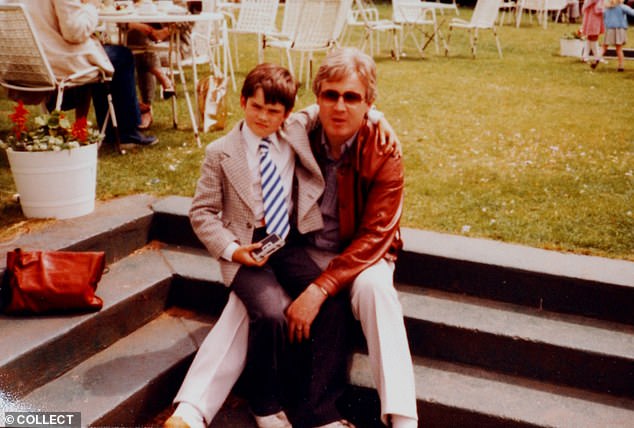 Strained: Jimmy revealed he has not spoken to his father Patrick James ‘Jim’ Carr in 21 years (pictured together in 1981)

He referred to ‘losing’ his mother and father at the same time but added he has ‘enough father figures and mother figures in [his] life’.

Jim and Nora split up in 1994, which led to the first cracks in family relations – particularly between Jimmy’s brothers and their father.

Back in 2012, Jim spoke out about their fractious relationship – in which he insisted Jimmy had ‘disowned him’.

He wrote in The Daily Mail: ‘I supported him financially, too, well into his 30s, enabling him to live rent-free in the family home and paying for all his expenses: his bills, petrol, even his food.

‘Despite all of this and the loving bond we once shared, Jimmy cut me out of his life eight years ago. It was sudden and brutal, and to this day, I have not been given an explanation… 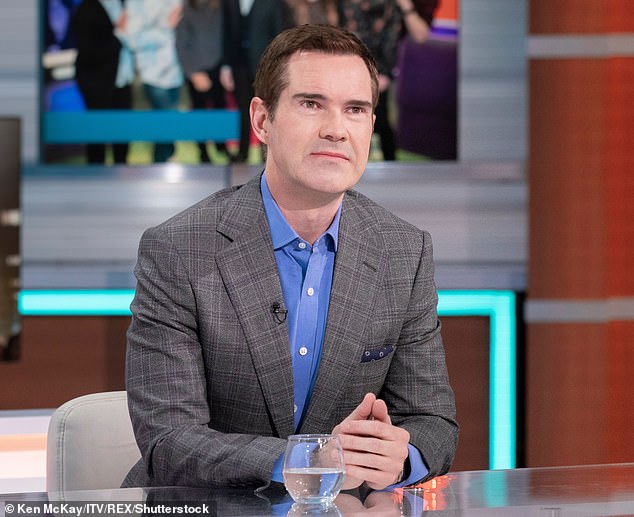 He said: ‘It’s not a secret, I haven’t seen my dad in 21 years and you know the line, ‘My mother’s dead and my father’s dead to me’ – which sounds very cold, until you meet the guy’

‘I am not ashamed to say that on occasion the depth of my estrangement from Jimmy — and from my two other sons Colin and  Patrick, who have also cast me out of their lives — has brought me to tears…

‘The loss forms the backdrop to my daily life and remains a pain I cannot eradicate. Such is Jimmy’s hostility towards me that I have even been banned from watching him perform.’

The family even entered into a legal battle, which Jim spoke of in the interview, saying: ‘Together with his older brother Colin — with whom my relationship had never really recovered since my marriage had broken down — he chose to accuse me of harassing the family, launching a legal case against me.

‘In sworn statements, Jimmy and Colin claimed I harassed them by sending them abusive emails and letters. Jimmy even claimed I was trying to damage his career.’ 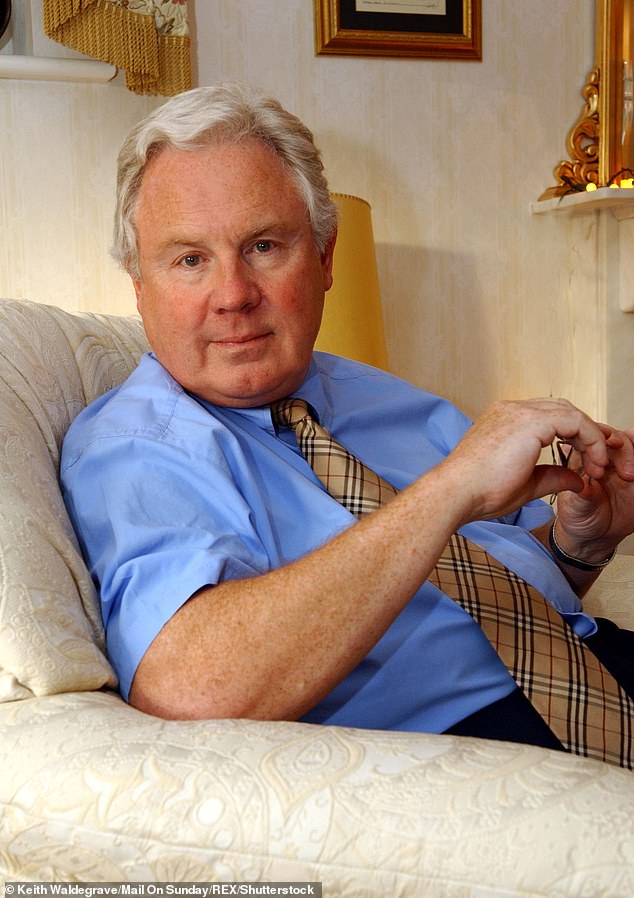 Jimmy said of his father:  ‘It’s a weird thing where I’m acutely aware that things don’t always work out. There’s no bitterness and there’s no anger there’

Jim revealed that in a bid to see his son he was forced to go to his concerts and eventually to a meet and greet where Jimmy gave him a cursory greeting in 2015. The next concert he tried to attend, he was turned away by management.

Jimmy later spoke about the ambush reunion in 2016, saying: ‘There was a signing after the show, and people getting photos or selfies. He was at the end of the line but just kind of looked at me. It was weird, he was just chilling…

‘I don’t think he knew what to say, a lot of time had passed. He turned up and was there and then just disappeared.’

He went on: ‘I had a relationship with him growing up, it was not terrible.

‘It’s a slightly weird one, the disconnect, you try to think of them as separate people. You kind of go ‘he was fine then and he’s not now, that’s OK’. [My mum] died and then it all just turned, they were already split up.

”My Dad’s gone, haven’t seen him in fifteen years perhaps. My Dad just kind of went. It was fairly ugly when he just sort of went. There’s nothing really to say, it got weird and it got to be where that wasn’t a good person to have in my life.’

The comedian has been in a relationship with Channel 5 commissioning editor Karoline since 2001 after meeting her at an audition.

The pair had not previously spoken about whether they would have children together.

In March 2017, he joked to Radio 4’s Desert Island discs that his girlfriend’s first impression of him was ‘one-note comedian with the eyes of a sex offender’.

The star said that even though Karoline wasn’t immediately taken with him, he was instantly smitten, saying: ‘I knew. It felt perfect.’ 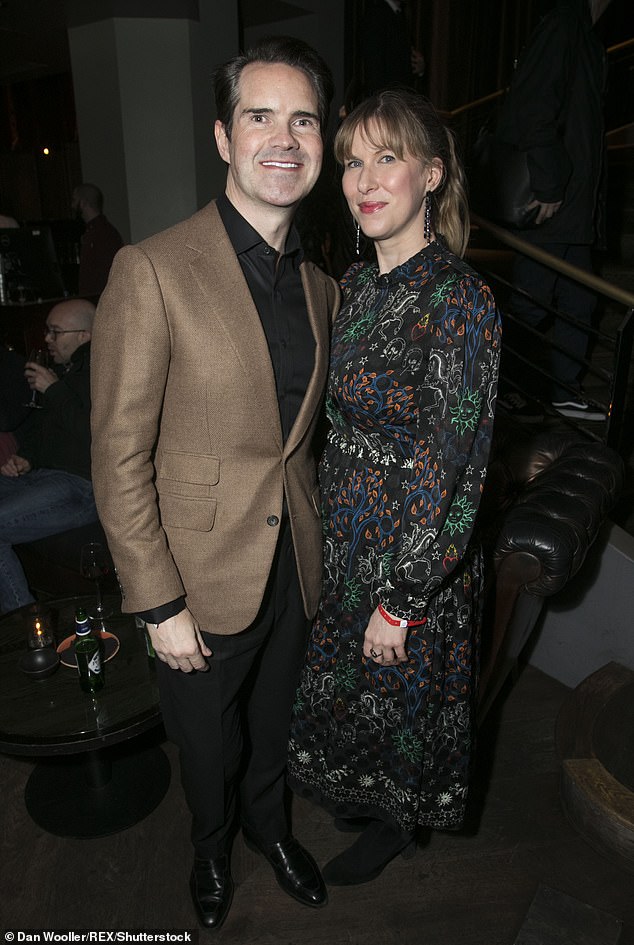 Family: The comedian, 49, confirmed he is a first-time dad after he and his partner Karoline Copping welcomed their son Rockefeller in 2019 (pictured together in 2020)