Jon Voight has released a video message that offers a dire warning of what's to come when Joe Biden and his administration take office.

Voight's latest message shows the actor seated with an American flag backdrop. He calmy speaks to the camera as he praises Trump and bashes a number of Democratic leaders.

The actor begins with a stern warning about the upcoming Biden administration. He suggests Democrats "want to destroy America."

JON VOIGHT 'DISGUSTED WITH THIS LIE' THAT BIDEN WON ELECTION: 'LET US FIGHT THIS FIGHT'

"We're heading down a street that has no name now. We must not allow our nation to crumble," he says. "Let me warn you all that we are in great danger if we fall under a Biden administration."

Voight then rips California Gov. Newsom, mocking his most recent coronavirus restrictions amid a wave of new cases and deaths in the Sunshine State.

"Our state, California, is being ruled by a leftist mob," Voight continues. "Gov. Newsom is taking away our freedom, your freedom. He is a disgrace to mankind — he and his relative, Nancy Pelosi, who has tried to bring President Trump down."

The award-winning actor specifically blamed Newsom for destroying the lives of business owners in the state.

"He is a lie like all the left that are trying to destroy the USA. I ask us all to fight this battle now to get them out," he says.

Voight also claimed he has been "attacked" by his peers for "preaching violence," but insisted it is Democrats who are doing so.

"The left are burning and destroying our cities. We are willing to fight for freedom, not freedom to burn down our flag but to raise her up with the glory of this land of the free," Voight continues.

He adds: "Let the truth show itself that President Trump is the only man that can save this nation." 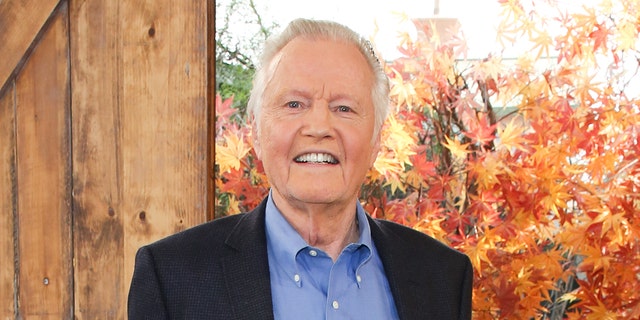 Voight also urges his followers to pray "in the name of Jesus, Moses and all saints for their hands of safety to be honest now."

Weeks ago, Voight shared a similar video after Biden was projected the winner of the election. He called the former vice president's victory a sham, warning there "will be a price to pay."

Prior to Election Day, the actor issued a harsh rebuke of Biden and called him “evil.”

Voight received criticism of his own when his "Ray Donovan" co-star, Eddie Marsan, mocked him on Twitter. Marsan shared a photo of himself and Voight on set.

“Hey America, I know this is the most important election ever & the survival of your democratic institutions and the soul of America is at stake but … can we just take it back to me for a second,” Marsan wrote on Twitter. “Please vote for Joe Biden, I can’t spend another 4 years listening to this bullsh–.”