Kylie Jenner had a scary Sunday. The makeup mogul posted to her Instagram story on Sunday, June 2, saying how grateful she is for her life, which was followed up with the reveal that Stormi Webster had a an allergic reaction to something that landed her in the hospital that day. She’s OK now, as Kylie Jenner’s Instagram about Stormi’s allergic reaction makes clear, but it was definitely a scary day for the new mom.

Jenner wasn’t all too active on Sunday. There weren’t even her usual Kylie Skin or Kylie Cosmetics plugs on her story. That’s not to say she’s not allowed to take a break from social media, more so just that her fans have gotten accustomed to seeing her post frequently throughout any given day, so the silence was noted.

Jenner eventually posted a video of her panning over the grounds of her California home at sundown with an emotional caption that read, "Blessed beyond words. Thank you God. I believe in being a reflection of what you would like to receive. If you want love, give love. If you want success, wish success." Next came her story about Stormi’s scary day.

It looks like Jenner’s first post to her story was inspired by the second. Jenner didn’t reveal what her daughter had an allergic reaction to, but it’s good to know that little Stormi is OK. 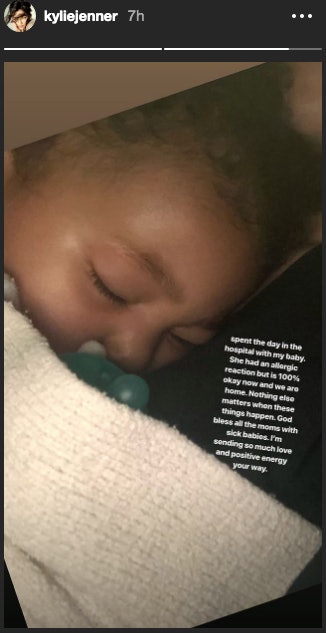 In late April, Stormi’s cousin, Saint West, was rushed to the hospital for an allergic reaction as well.

Kris Jenner spoke with Refinery 29 about some scary moments where her kids called her in a panic about their own kids. She revealed that Mason Disick had a bad allergic reaction to peanut butter when he was younger.

"The first one I ever got was the most alarming. It was when Mason ate peanut butter and his face started blowing up and his throat started closing," Jenner said. "They had to rush him to the hospital. He had a peanut butter allergy for the longest time. He’s fine now. The scariest is always the first time."

Then she talked about Saint West, saying that while the family was on a vacation to Palm Springs, they believe Saint had an allergic reaction to grass.

"The most recent one that comes to mind is a week ago or so when we went to Palm Springs and Saint, my little grandson, we discovered he might be allergic to grass. We ended up in the E.R., but all is well — we figured it out."

It’s good to know that all three of these little ones are doing OK! Random allergic reactions can be terrifying, so I’m glad little Stormi’s all good.