Taylor Swift has a lot of fans, no doubt, but who would have thought Lindsay Lohan was one of them? And by the looks of it, she seems to be a huge stan. During Taylor Swift’s Instagram live on June 13, in which Swift revealed her album’s title and second single, Lindsay Lohan did what all stans do: leave comments trying to get her idol’s attention. You would think that all Lohan had to do was tweet Swift or DM her in order to catch her attention, since you know, Lindsay Lohan is Lindsay Lohan. But no, the Mean Girls actress did it in the most awkward, Cady-Heron way possible by posting random — and I mean the most random — comments on Swift’s IG live. Like, I’m honestly speechless because I don’t know what to think of Lindsay Lohan’s comments on Taylor Swift’s Instagram live. I’m so confused but, at the same time, I find them hilarious?

I won’t leave you in suspense much longer. I’ll just tell you what Lohan said so you can be equally confused as me about her comments. Maybe we can figure out what she means together? Sounds good?

According to Just Jared and screenshots captured by fans, the first comment that Lohan left on Swift’s IG live was, "Omg love you! So does my sis @alianalohan." She then followed up with, "We think you’re great." 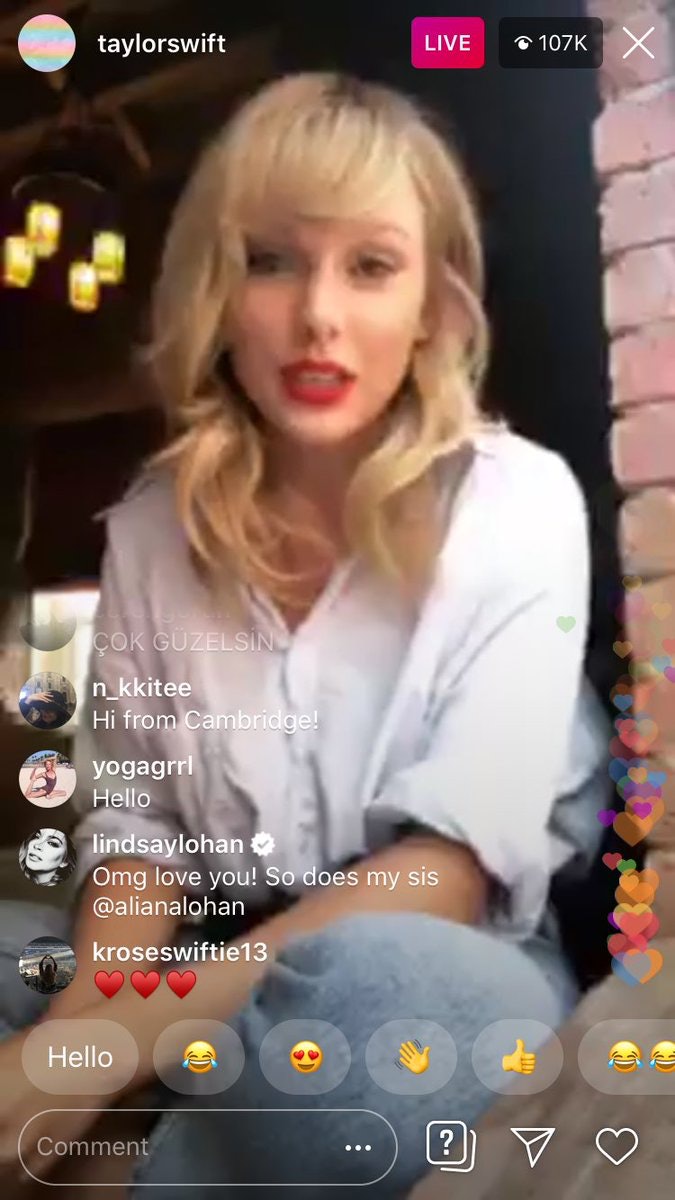 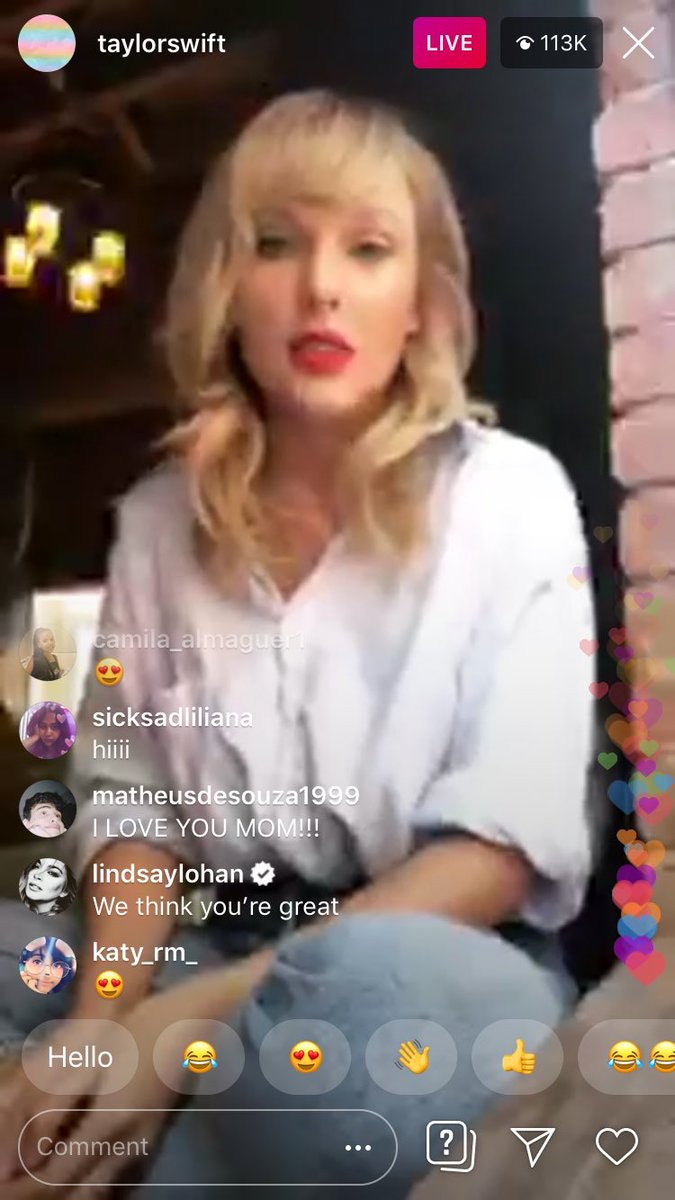 OK, sounds normal. It actually seemed really cute of Lohan to show off her inner fangirl. But that was just the start. Since Swift didn’t respond to Lohan or give a shoutout to Lohan’s sister, Aliana, Lohan tried even harder to catch the singer’s attention. She urged Swift to reply to her and other fans by commenting, “You should respond!” 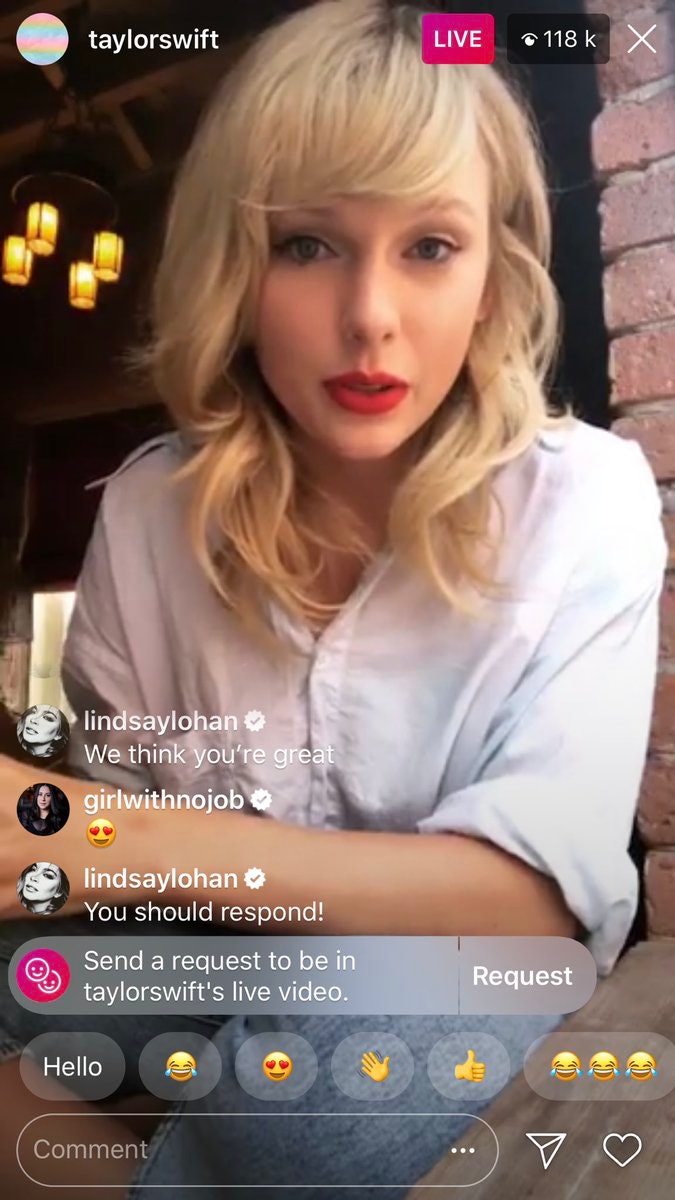 Uhhh, there were over 100 thousand fans watching Taylor Swift’s IG live, so it was kind of impossible for her to reply to everyone, even other celebs.

But here’s the best part: Lindsay Lohan commented, “My mom was in cats." Like, what? This was seriously my reaction:

I mean, I know that Taylor Swift will be starring the movie adaptation of the musical CATS. But still, I don’t get it. Was Lindsay Lohan’s mom actually in CATS? If so, why did Lohan feel the need to let Swift know? Does she really want Swift’s attention that much? But hey, I’m not judging. You do you, Lindsay.

Swift’s fans were so amused by Lohan’s comments:

But some people didn’t find it so funny:

Seems kind of funny that Swift’s IG live was all about her new song, "You Need To Calm Down," right? But I’m sure Swift didn’t mind finding out she had a fan in Lindsay Lohan.

Anyways, I don’t know why Lohan wanted Swift’s attention so much, but she’ll probably have better luck sending a DM to Swift or having her people contact Swift’s people, or y’know, however the celebrity world works.