At first glance, Meghan McCain and Mary Trump seem to have a lot in common. Both are women from prominent Republican political families — Meghan is the daughter of the late Arizona Sen. John McCain and Mary is the niece of former president Donald Trump. They are around the same age, they both have blonde hair, and they both have a lot of strong opinions they are not afraid to share on network television. But, based on what Mary just said about Meghan during a segment on “The View,” the similarities may end there.

Mary appeared on “The View,” the daytime talk show Meghan co-hosts, on August 2 to discuss her famous uncle and the state of the Republican party in America today. Meghan is usually always ready to throw down some white hot takes when chatting with particularly controversial guests but, for whatever reason, she was nowhere to be found during Mary’s segment on the show. Viewers found her absence a bit curious, to say the least, and clearly so did Mary. Here’s what she said. 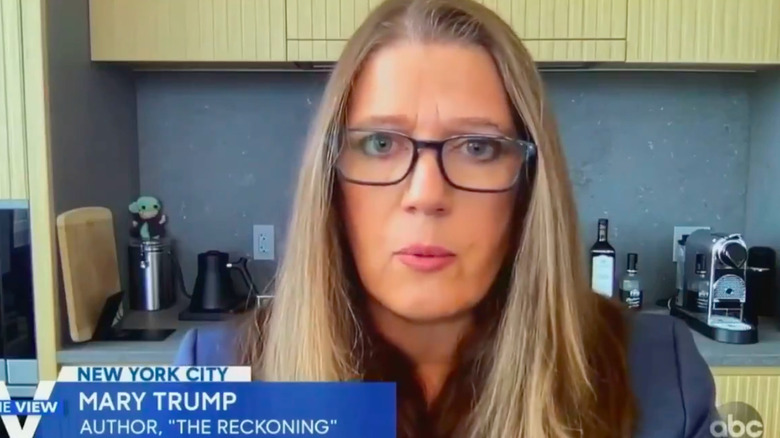 Never one to shy away from saying what everyone else is thinking, Mary Trump called out Meghan McCain directly — though not by name — when she saw that the show’s resident conservative had decided to skip her segment on “The View.”

“It’s a shame that your colleague didn’t have the courage to come on and have this conversation with me, but I appreciate that you’re all willing to take up these very difficult subjects because racism, in my view, is at the heart of everything that’s wrong in 21st-century America,” Trump said. Now, we don’t think saying that racism is wrong is a particularly controversial statement, but we have to admit that it is a bit suspicious that this is the guest that McCain decided not to engage with on the show. After all, she was not afraid to go after another Trump family member, Donald Trump Jr., when he appeared on “The View.”

And social media, it appears, is Team Mary Trump on this one. “Mary Trump dragging Meghan McCain is what I live for,” wrote one Twitter user. “Meghan McCain’s final week on #TheView is off to a great start…” quipped a Daily Beast reporter. One Trump Organization parody account joked, “Mary Trump just cast so much shade at Meghan McCain, the rain forests died.” Another person observed, “Mary Trump had time today on The View.” All we can really say is, if you can’t take the heat, stay off “The View.”