Megan Fox Packs on the Heat in a Mugler Blazer Minidress

The Midnight in the Switchgrass actress recently appeared on The Kelly Clarkson Show in a black Mugler blazer minidress that featured a corseted bodice and ballooned shoulders. Stylist Maeve Reilly topped off the sultry look with black Jimmy Choo platform heels and hoop earrings by Jennifer Fisher. 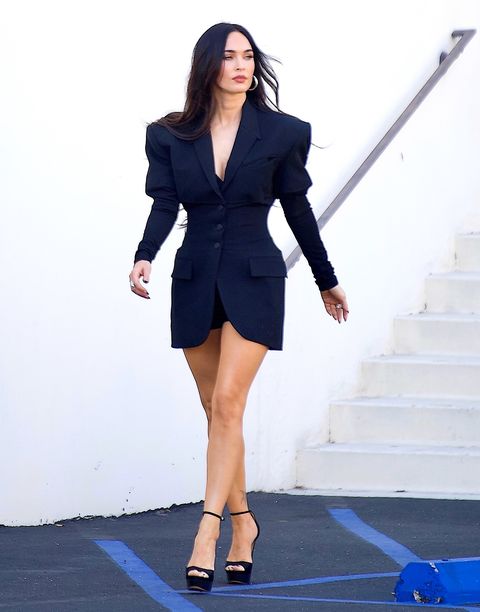 Fox has been showing off her street style more and more lately, from her varsity-esque Versace cardigan paired with Christian Louboutin boots to her Y2K throwback in faded jeans and UGG slip-ons. As for a solid accessory? She’s usually photographed with boyfriend Machine Gun Kelly in tow.

The two first started dating in early 2020 after meeting on the set of Midnight in the Switchgrass. “I knew right away that he was what I call a twin flame,” Fox said of her beau during a joint interview on Lala Kent and Randall Emmett’s podcast, Give Them Lala … with Randall. “Instead of a soulmate, a twin flame is actually where a soul has ascended into a high enough level that it can be split into two different bodies at the same time. So we’re actually two halves of the same soul, I think. And I said that to him almost immediately, because I felt it right away.”

Fox was previously married to Brian Austin Green for nearly a decade before separating in 2019 and ultimately filing for divorce in 2020.

Green also confirmed their separation on his podcast. “I feel like people are on paths in life sometimes and you’re on the same path, and you walk that path together, and things are working,” he said, “then paths just kind of separate sometimes.”