Model Rebecca Landrith was found dead on the side of a Pennsylvania highway on Sunday with multiple gun shot wounds to her body, according to reports.

Landrith, a Virginia native who worked as a model in New York City, was found early Sunday morning on an exit ramp along Interstate 80 in Union County, Pennsylvania, PennLive.com reports.

The 47-year-old woman’s body was discovered by a Pennsylvania Department of Transportation employee. According to the report, a coroner found Landrith sustained multiple gunshot wounds to her head, neck and throat. 18 bullets were removed from her body.

A note that was found in Landrith’s pocket reportedly led authorities to a suspect. The note included the name, phone number and email address of Tracy Ray Rollins Jr., 28, of Texas. He has been charged with homicide and abuse of a corpse in her death, the outlet reports.

LARRY KING’S HANDWRITTEN WILL LEAVES $2 MILLION ESTATE TO BE SPLIT AMONG HIS KIDS: REPORT

Rollins Jr. was reportedly a truck driver. Authorities claim he had recently traveled from Wisconsin to Maine, with a stop in Pennsylvania. He was located and arrested in Connecticut, the report states. 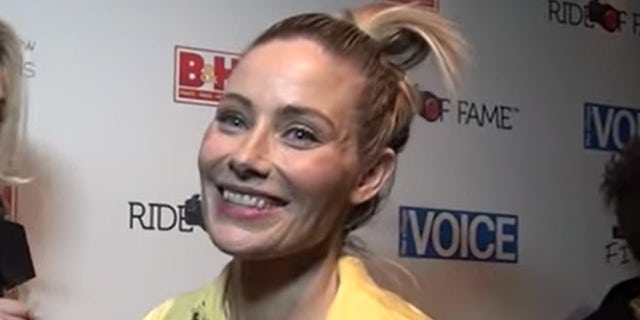 The body of Rebecca Landrith, 47, was discovered on a Pennsylvania highway on Sunday.
(YouTube: Winter Film Awards)

According to an affidavit, investigators believe Landrith was shot inside the cab of Rollins Jr.’s truck. Police have not revealed a motive for the shooting.

When questioned by police, Rollins Jr. claimed he did not know Landrith and was instead traveling with a woman named “Leslie” who he met at a truck stop in Connecticut, the report states.

The model’s brother, George Landrith, said the family is mourning her passing but is “relieved” an arrest was made.

“It doesn’t ease the sense of loss,” George told the outlet. “Her family loved her dearly. None of this brings her back. It is important she receives justice.”

Landrith had an account on iStudio.com in which she described herself as a “professional fashion model.” She was “America’s It Girl Miss Lady Liberty” and a finalist for 2014’s “Miss Manhattan” contest, according to the website.

“Ms. Landrith has appeared in numerous product advertisements, video commercials, magazines, acted as a spokesmodel in videos for businesses and their websites, and multiple haute-couture Runway shows including Fashion Week,”the webpage added.