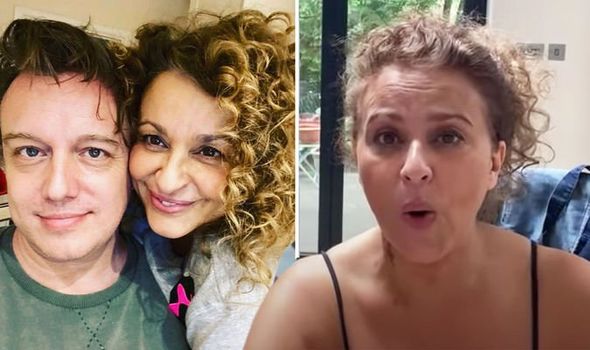 Nadia Sawalha, 56, and husband Mark Adderley are no strangers to discussing controversial topics on their Confessions of a Modern Parent podcast and their latest episode was no different as the pair opened up on parenting regrets.

The couple shared some of their listeners’ stories, with many admitting they had wished they were in a better situation.

Sharing his own confession, Mark said that while he didn’t regret having any of his children, he regrets the frame of mind he was in at the time.

The podcast host has daughters Izzy and Fleur from previous relationships and Kiki and Maddy with the Loose Women star.

Reflecting on his past, he said: “In terms of my regrets, I regret the fact that two of my daughters essentially come from broken homes.

“That is an enormous regret that I carry with me every day.

“It’s a regret that is thumped in my face nearly every time we think of a family get together, holiday, social situation.

“It’s something that I feel every single time.”

But on the positive side, Mark said he now has a stronger relationship with his older daughters after “many mistakes”.

He added: “I don’t regret any of my girls, I regret my age, my frame of my mind.”

Discussing his family unit with Nadia, he went on to say he believes their daughters were the “making” of them.

Before the pair welcomed daughter Maddy to the world, Mark battled alcohol issues.

“She came at a moment which change the course of my life,” he admitted. “So, I can’t even regret my addiction in that sense.”

Nadia has previously opened up on getting to grips with becoming a stepmum to Mark’s children when his eldest was just eight.

In an earlier episode of their podcast, she said: “The horror of the negotiations bled into our relationship.

“I never got to know Izzy’s mum. You were both still at loggerheads with each other.

“I just thought, these two have to stop this anger. It was very weary.”

The presenter admitted the situation affected their relationship at the time.

“A lot of people find that too much,” she admitted.