BBC Breakfast host Naga Munchetty, 45, regularly interacts with her co-stars on Twitter and gives viewers an insight into her day-to-day life. The TV star has since addressed a loss behind the scenes as she spoke out about her colleague’s departure.

Naga offered a touching message on the micro-blogging site as she spoke of “new adventures”.

In view of her 232,000 followers, the BBC star praised her former colleague who has taken on a new role with BBC World Service.

It comes as former newsreader and social media editor Melanie Stewart-Smith penned: “Delighted to tell you that from January I’m going to spend three months on an attachment with BBC World Service Digital.

“I’ll miss the @BBCBreakfast team lots but I’m super excited to learn new skills and work with @bbc colleagues around the world.” 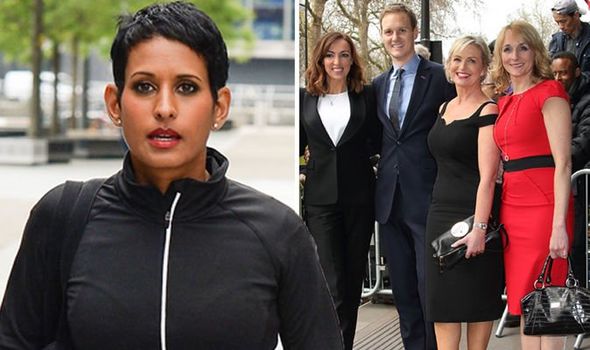 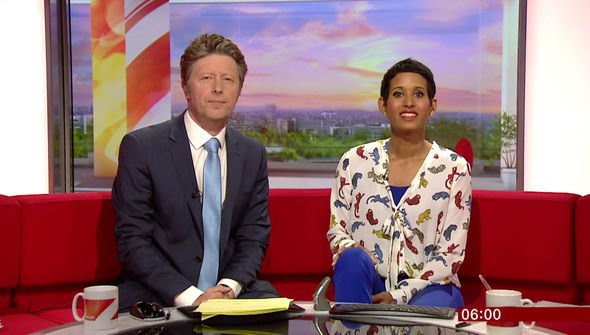 Naga took the opportunity to wish her colleague well on her latest venture away from the breakfast show.

It didn’t take long for her fellow BBC Breakfast co-stars to also offer congratulatory messages to their colleague.

Mike Bushell said: “Huge congrats Mel. Amazing news for you taking on the world. You’ll be hugely missed but hopefully back soon.”

Carol Kirkwood typed: “Well done you! We will miss you.” 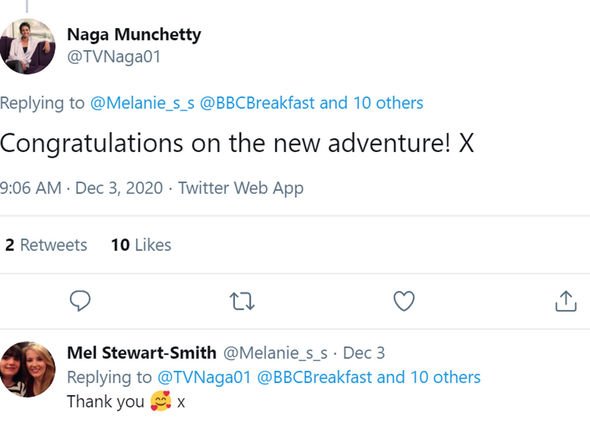 BBC host Nina Warhurst typed: “Ahhhh that is so exciting! A whole world of animals to go at. Literally…”

While Dan Walker replied with clapping-hand emojis following the news.

It comes as Naga recently announced she was joining BBC Radio 5 Live while continuing her role on breakfast.

She will be taking over from Emma Barnett on Radio 5 Live, waking up the nation from Mondays to Wednesdays.

Elsewhere, Naga made the most of her time off earlier this week, where she shared several photos of her afternoon out.

The lovely snapshots showed the picturesque surroundings of the Worsley area, which included Tudor style homes and a bridge over a tree-lined canal.

Taking to Instagram, Naga captioned the photos: “Today has been a good day so far… A walk in the sunshine around Worsley with a good friend, both chatting incessantly and freely, that was just one of the highlights. Hope your Wednesday is a good one.”

One person said: “Nice to hear something positive in these difficult times Naga. Beautiful pictures, have a good evening.”

Others added: ” Looks lovely there,” “Beautiful photos,” and: “Sounds like it was good for the soul Naga.”