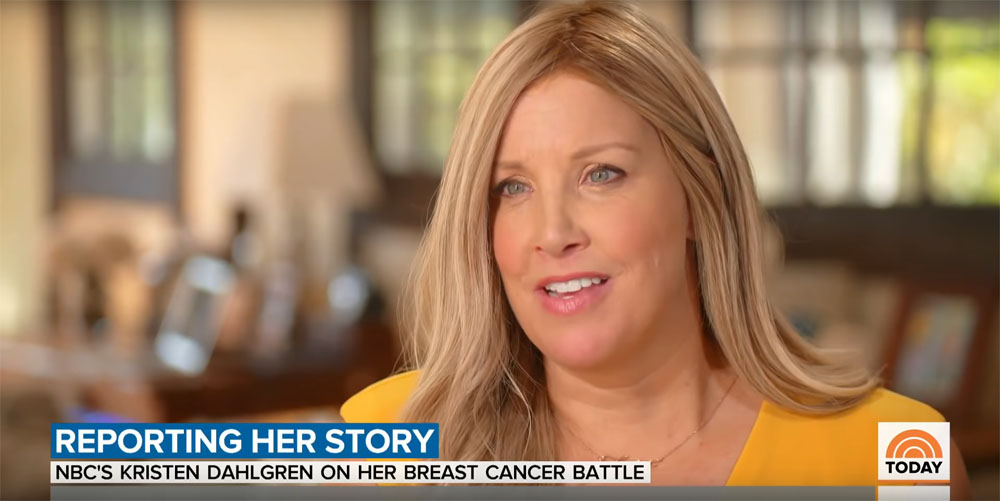 In early October, Mathew Knowles shared that he had been diagnosed with breast cancer. Part of the reason that he shared his story was because he wants to encourage men to talk to their doctors about the possibility of being diagnosed with a cancer typically associated with women. He wants to break down the stigma surrounding breast cancer in men. Another celebrity sharing her breast cancer diagnosis is NBC correspondent Kristen Dahlgren, who recently recognized an unusual symptom of breast cancer because she’d reported on it:

In 2016, NBC News correspondent Kristen Dahlgren reported on unusual signs of breast cancer that aren’t widely known. Three years later, she spotted one of them in herself, and learned that she has stage 2 breast cancer.

While the majority of women identify their breast cancer based on a lump, Dahlgren was reporting on a new study that found that other signs — nipple changes, dents, dimples, pain or redness — could also be indicators of breast cancer. . . .

But as she got dressed one day in September, Dahlgren noticed that she had a “slight dent” in her right breast — one of the unusual signs from her 2016 story.

“Beneath the dent, I didn’t feel a lump, but something I might describe as a ‘thickening,’ ” she explained. “It just felt different than everywhere else.”

Kristen explained that she didn’t have a family history of breast cancer and had gone for a mammogram a few months earlier that came back with no signs of cancer, so her diagnosis was not something that she was prepared for. She is currently getting chemotherapy treatments and has surgeries scheduled. Kristen said that she has “a long road ahead” of her and that cancer is “definitely the hardest thing I’ve ever been through. It’s scary. It’s really scary.” Happily, she also said that she and her doctors are optimistic.

I’m so glad for Kristen that, thanks to her own research and reporting, she was able to recognize that she might have cancer. That awareness allowed her to get her diagnosis quicker than she otherwise would have. She’d had her last mammogram in April, so might not have found out for another 7 months at least! I’m happy that she’s optimistic, and I hope that her treatment goes well and that she’s soon cancer-free.

Note by CB: Here’s Kristen telling her story. Her stepson went through leukemia and she said she would much rather she have cancer than have it happen to one of her kids. Kristen said she has a long road ahead, that she’s still in chemotherapy and that she’s tired but has so much support from friends and family.

Our @kristendahlgren credits a story she did for @NBCNews with saving her life and helped her find a subtle sign of breast cancer. pic.twitter.com/X9Yjz2io2h 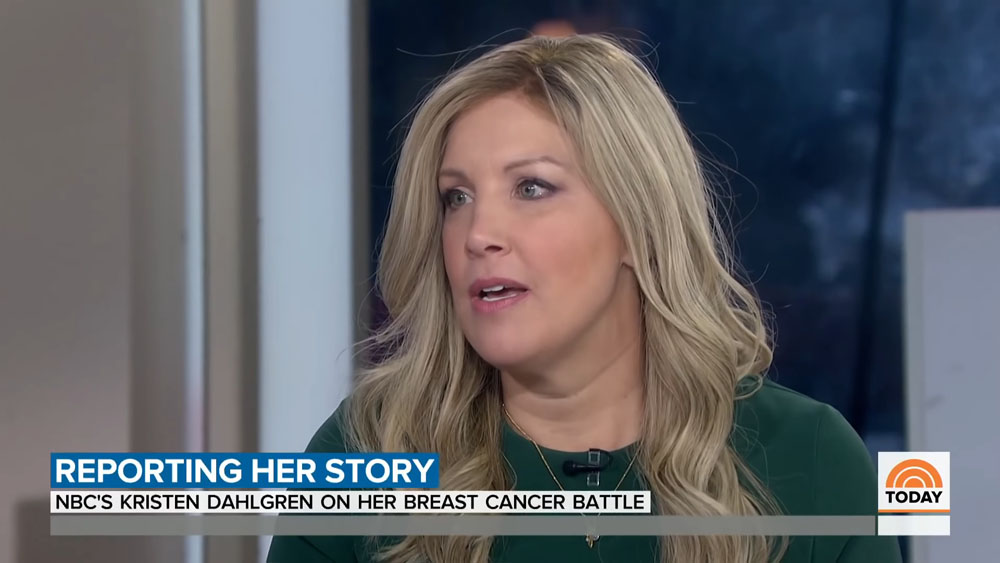