“In this day and age, people want something that tends to affirm their views and opinions,” Ruddy tells Smith 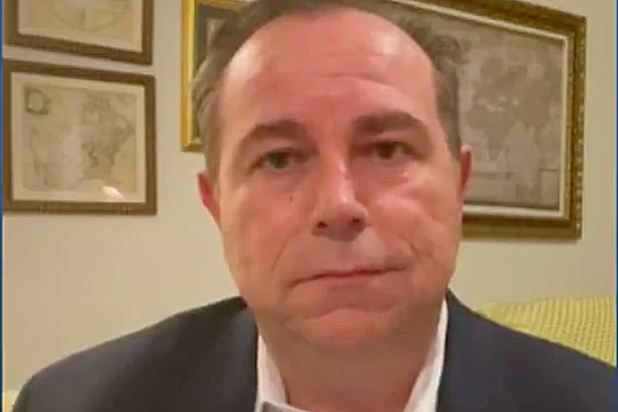 In a new column titled “The King of Trump TV Thinks You’re Dumb Enough to Buy it,” Smith said Ruddy sidestepped questions about why his fledgling news network continues to push unsubstantiated claims of election fraud, but offered this: “In this day and age, people want something that tends to affirm their views and opinions.”

And Smith suggested that Ruddy cynically played to his right-leaning audience’s belief system despite the facts. “Nobody I’ve ever covered treats an audience with the blithe disdain of Mr. Ruddy,” he wrote of the CEO. “He has them watching a great story — a thriller, a whodunit — about a stolen election. He thinks they’re stupid enough to fall for it, dumb enough to keep watching even after the fantasy inevitably dissolves, buying the supplements and the books and, crucially, tuning in to channel 1115 in large enough numbers that, eventually, the cable companies will pay him.”

In addition, Smith unearthed old letters Ruddy sent to Hillary Clinton aides in 20o4 that suggest he hasn’t always been a true believer of the right-wing cause. Ruddy wrote to former New York City Mayor Ed Koch that Clinton was doing “a remarkably and surprising good job for NY as Senator,” Smith reported. Ruddy went on, “I might not like Hillary’s liberalism, but I don’t dislike her on a personal level — as I do Rudy. Rudy Giuliani is a bad person.”

The Smith column comes as Trump has been urging his followers to tune into Newsmax (or competing conservative channel One America News) instead of Fox News in recent weeks.

On Nov. 7, when every major media platform and channel declared that Joe Biden had won the 2020 election, Newsmax announced it would hold off on declaring a winner. As Trump has refused to concede and baselessly insisted there was widespread voter fraud in the election, Newsmax has had his back, contributing to what Smith branded “a thriller, a whodunit.” While Fox is still undoubtedly a ratings juggernaut and leads primetime easily, Newsmax did see a post-election ratings bump from presumable defectors or viewers interested in following that false plotline.

A representative for Newsmax did not immediately return a request for comment on Smith’s column.