The Only Murders In The Building season one finale is out now!

Selena Gomez, Steve Martin and Martin Short star in the Hulu series, which follows a trio who live in the same NYC apartment building, who come together to try and solve the murder of one of their fellow tenants, who also turned out to be one of Selena‘s character’s childhood friends.

All season has led up to the moment of finding out just who the suspect was, and it was finally revealed!

Get the spoilers inside…

In the season finale, the trio races toward a resolution while their own lives are put in danger. The episode before teased that Mabel and Oliver suspected who Tim Kono’s killer was and it turns out, they were right. 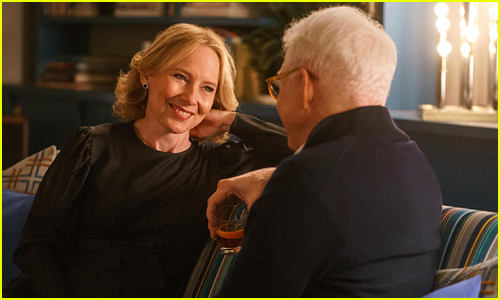 It was Jan, played by Amy Ryan, Charles’ new girlfriend, the bassoon player!!!

Once Mabel and Oliver figured it out, which included going into her apartment for more clues and evidence, they went to tell Charles, who was with her. Jan even tried to poison Charles next, after he got a full confession from her.

They eventually get her and she is arrested by the police. But then, fast forward just a little bit… The trio are celebrating that they solved the case and when Mabel leaves to get more champagne, the guys hear sirens getting closer and closer.

They receive a text from an unknown number that tells them to get out of the building now. After reading it, they run downstairs to warn Mabel, where they find her with a body, covered in blood. This leads us to what was teased in the first episode.

While the body was wearing a tie dye hoodie, when turned over, it was revealed to not be Mabel’s friend and tie dye guy Oscar, but to be the building manager Bunny, who was stabbed by a knitting needle.

Mabel says that she just opened the door and Bunny stumbled into her, hence being covered in blood. We then see the police barge into the apartment, with the three being taken out of the building in handcuffs. Which explains THESE PHOTOS from earlier this year.

At the end, we also see the return of Tina Fey as fellow crime podcast host Cinda Canning, teasing that she could be starting a new podcast called Only Murderers In the Building…

Only Murders has been renewed for a second season, and earlier in the season, it was revealed that the season two plot could revolve around Cinda investigating the new murder.