Tempting as it is to see Arthur Miller’s witch-hunting drama as a warning against political correctness, it actually makes today’s wokefulness look pitifully transient and trivial.

His 1953 play was written as an indictment of the McCarthyite anti-communist hysteria in the U.S. and drew stark parallels with the notorious witch trials in 17th-century Salem — in which 19 men and women were hanged in a religious panic among puritans.

Like today’s politically correct thought crimes, witchcraft was an invisible evil. It was fake news that made people see wickedness everywhere and forgiveness nowhere.

As one character cries in despair: ‘Is the accuser always holy now?’ It’s a line that will chime with those of us weary of PC law.

But the really great thing about Lyndsey Turner’s gruelling new production of Miller’s 20th-century classic is that it digs deep into the play’s questions of human longing for justice — and once more shows how helpless we become when that justice is corrupted. 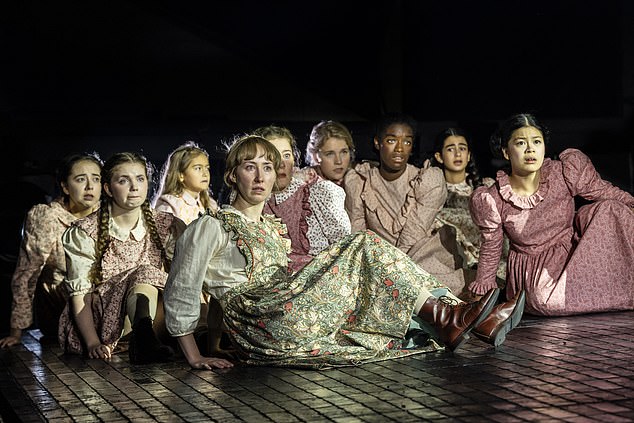 PATRICK MARMION: But the really great thing about Lyndsey Turner’s gruelling new production of Miller’s 20th-century classic is that it digs deep into the play’s questions of human longing for justice

The role of John Proctor, who reluctantly stands up to the moral firestorm in his community, can often become a star vehicle. But Brendan Cowell plays Proctor as more of an everyman — a regular guy struggling to do the decent thing.

He is subjected to a harrowing prosecution by Matthew Marsh as Deputy Governor Danforth, who brings judgment from Boston like Moses descending from Mount Sinai, but is nonetheless genuinely compassionate in his quest for truth.

Pathos is also carried by Eileen Walsh as Elizabeth, the tormented wife on whom Proctor once cheated. Her pain fuels his guilt, but Fisayo Akinade brings huge warmth as pastor John Hale, who tries to intercede between the couple and the authorities, who are desperate for a conviction.

The play is, in many ways, a waking nightmare and Es Devlin’s design reflects that, with a stark staging in a pit of darkness lit like a Dutch old master.

The chorus of fearful young women, led by Erin Doherty’s Abigail Williams, who trigger hysteria after ‘trafficking with spirits in the forest’, sit at the back of the stage like a row of dolls, faces tinged with green light.

With slowly gathering sound adding stomach-knotting dread, this is as gut-wrenching a production of Miller’s play as I expect to see. It’s long (three hours). But it fathoms the ominous depths of this chilling drama.

As well as writing some of the greatest plays of the 19th century, Norwegian playwright Henrik Ibsen knocked out some pretty whacko numbers, too. John Gabriel Borkman is one.

Revived by Sir Nicholas Hytner with Simon Russell Beale in the title role, it’s the formidably overblown story of a disgraced banker who refuses to accept his guilt.

Cut loose from its period detail and set in a contemporary ‘palace’ of embossed concrete, I found Lucinda Coxon’s adaptation hard to take seriously. 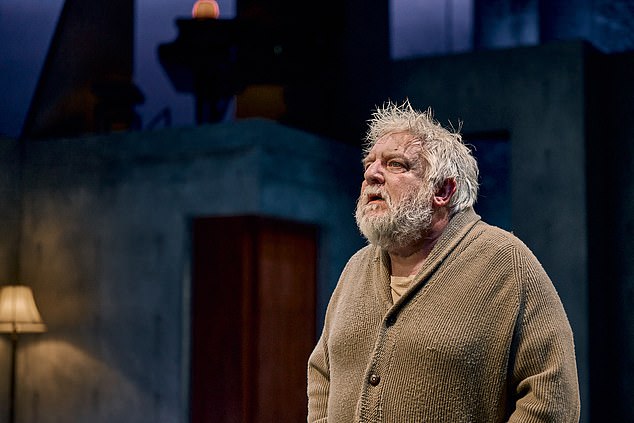 As well as writing some of the greatest plays of the 19th century, Norwegian playwright Henrik Ibsen knocked out some pretty whacko numbers, too. John Gabriel Borkman is one

Especially implausible is a power struggle in which Borkman, his wife (Clare Higgins) and her sister Ella (Lia Williams) lay claim to Borkman’s grown-up son as their private property.

And the dialogue creaks with preposterous exclamations, such as Borkman’s exit line: ‘I’m off into the storm of life!’

On the upside, Coxon is licensed (as a female) to pass off as comedy the intermittent misogyny of lines such as ‘women are fundamentally interchangeable’. Borkman’s misogyny, though, is surely at the heart of his hubris.

Higgins is amusingly cynical about his self-assessment, but Williams’s Ella — who for some reason is dressed like Worzel Gummidge — has the tougher task of admiring her brother-in-law while damning him for his failings.

Trickiest of all is Russell Beale’s role as the former Norse oligarch (pictured left). Too cuddly to be tragic, he looks like a frazzled King Lear who’s overdone the marmalade sandwiches.

Perhaps it is best to present Borkman as such a Johnsonian muddle. How else can you make this contemptuous old crook seem loveable?

Today, his dreams of world domination look more like a serious personality disorder.

Three farces for the price of one!

Verdict: The good laugh we all need

Michael Frayn’s 1982 Noises Off is actually three farces for the price of one. You certainly get more than your money’s worth in Lindsay’s Posner’s feverishly funny and frenetic 40th anni-versary production which opened last night in Bath, proof that it has lost none of its power to reduce well-behaved adults to hysterical wrecks with mascara streaming down their ankles. That was me, anyway.

It begins relatively quietly, as a pastiche of a sub Ray Cooney trouser-dropping door-slamming sex farce entitled Nothing On, staged by company of second-rate, worn-out actors.

A hard of hearing, vacant Selsdon (Matthew Kelly) plays a burglar, when sober enough to remember his cue. 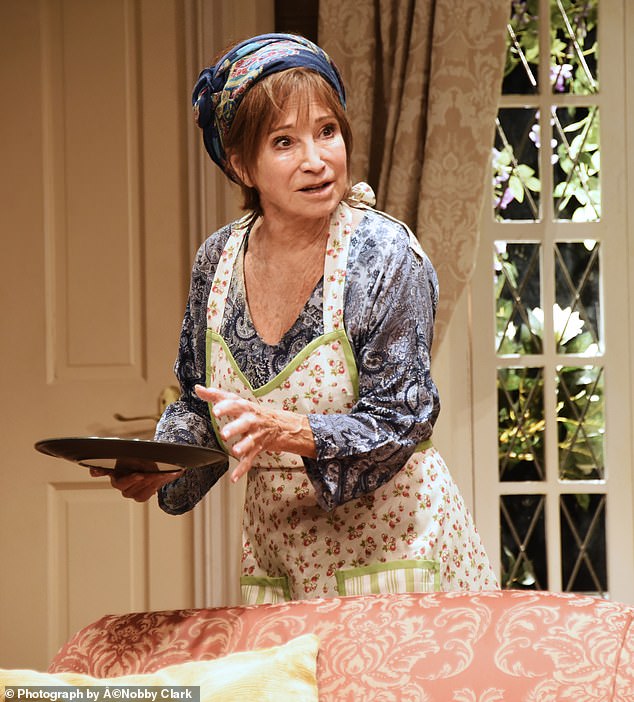 GEORGINA BROWN: Michael Frayn’s 1982 Noises Off is actually three farces for the price of one

The sublime second act, set backstage, teeters on the edge of calamity as the private passions, jealousies and rivalries invade the public performance.

Joseph Millson is outstanding as the increasingly demonic Garry (playing Roger the randy estate agent), whose suspicion that Dotty, his off-stage squeeze, is carrying on with Freddie is fuelled by finding her in what appear to be compromising positions with various actors every time he comes offstage.

The final act, back on the set of Nothing On, descends into total chaos, as sardines, boxes, bags and characters appear — and then disappear — in exactly the opposite order they are sup-posed to.

Tracey-Ann Oberman’s buoyant Belinda ad libs with all her might, but the situation gets worse rather than better.

There is much to delight in this superbly drilled, dazzling display of verbal and physical dexterity and split-second timing. But it’s more than mere theatrical mechanics.

Noises Off may be old-fashioned, but the precision engineering and craftsmanship guarantees a couple of hours of total escapism. As Lloyd says: ‘Getting on, getting off. Doors and sardines. That’s farce, that’s the theatre, that’s life.’ And so it is.