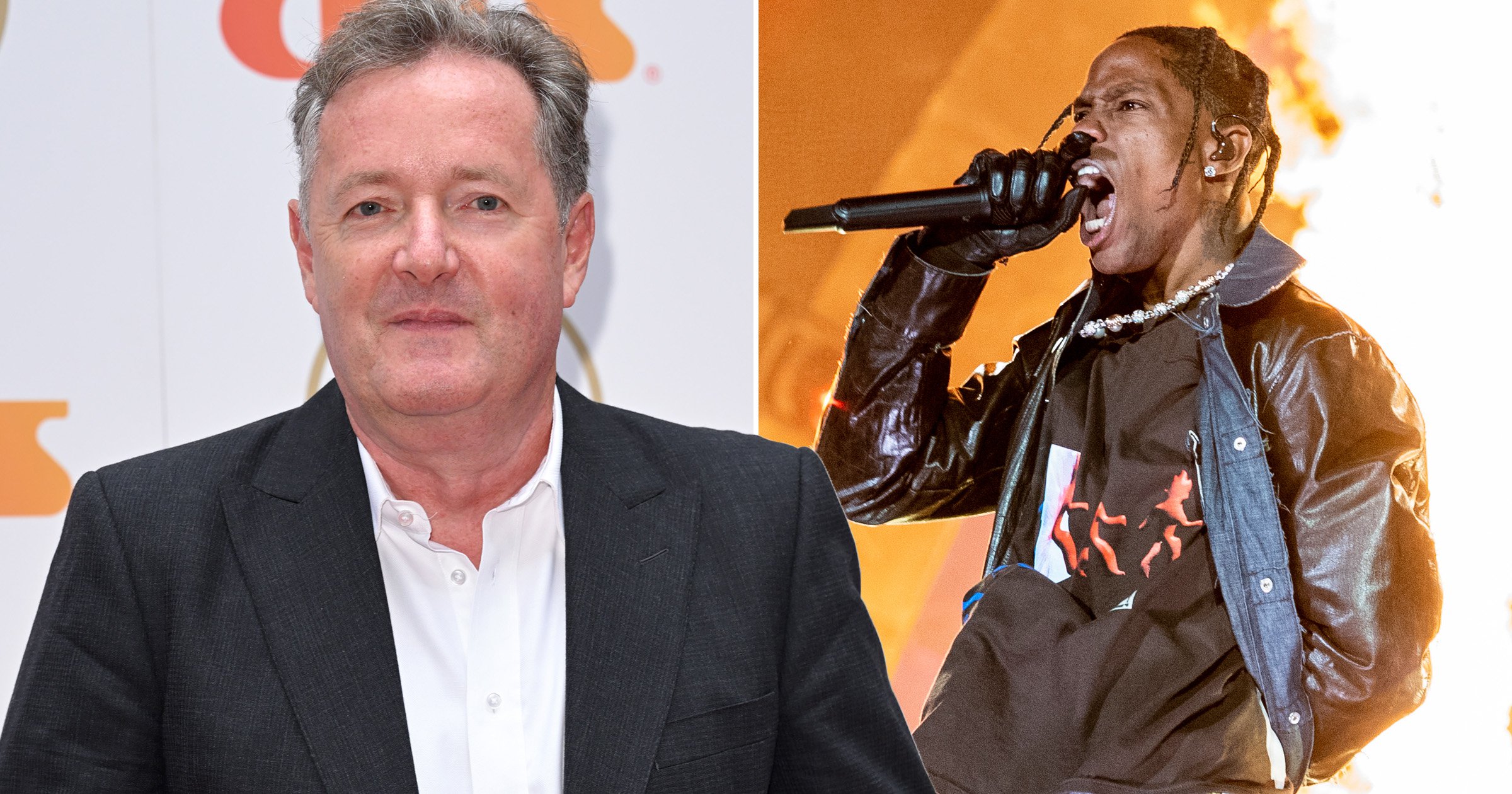 Piers Morgan has spoken out to slam Travis Scott after a crowd surge at his Astroworld festival caused the death of eight fans.

Eight people were killed on Friday at the festival in Houston, Texas, the youngest of whom was just 14 years old.

Piers, 56, spoke out in his latest column for the Daily Mail to condemn, Travis, 30, for his apparent disregard for the safety of his fans by encouraging them to ‘rage’ as the mass casualty incident was unfolding in front of him.

Travis had taken to social media afterwards to tell his followers he was ‘devastated’ at the deaths and hospitalisations which occurred.

He wrote in a statement: ‘I’m absolutely devastated by what took place last night. My prayers go out to the families and all those impacted by what happened at Astroworld Festival.

‘Houston PD has my total support as they continue to look into the tragic loss of life.

‘I am committed to working together with the Houston community to heal and support the families in need.

‘Thank you to Houston PD, fire department and NRG Park for their immediate response and support. Love you all.’

He also vowed to cover the funeral expenses of the deceased as well as refunding attendees for their tickets.

Piers, however, felt it was disingenuous as Travis had kept performing despite the crowd shouting for him to end the show and get help for those injured and dying.

He wrote: ‘Forgive me if I find Mr Scott’s shocked disbelief to be a load of disingenuous self-protective claptrap.

‘If there was one nailed-down guarantee, it was that something terrible like this might one day happen at one of his concerts.

‘This is a man who thrives on chaos and mayhem during live performances.’

Piers referenced many times Travis had encouraged dangerous behaviour among his fans, including telling one fan to jump off a balcony to be caught by fans below, which resulted in another man being knocked off the overcrowded balcony and suffering injuries including several broken bones and vertebrae leaving him with a ‘significant disability’.

Travis had also pleaded guilty in 2015 to a charge of reckless conduct and was sentenced to a year of court supervision after urging fans to jump over the safety barricades at Lollapalooza festival.

He could be heard yelling: ‘All my real ragers jump the barricade right now! Let’s go. Come over. I want chaos.’

The Office of Emergency Management said at the time: ‘The performer played one song and then began telling fans to come over the barricades. Due to the security’s quick response, the situation was remedied immediately, and no fans were injured.’

Piers believes Travis ‘is to blame for creating an environment at his concerts where his fans don’t think safety protocols matter or need to be heeded’ and should not be surprised at the reaction of the crowd after dangerous crowd surges and injuries at previous Astroworld events.

In videos from the night, Travis can be heard saying: ‘If everybody good, put a middle finger up to the sky,’ before fans raise their middle fingers up with him as ambulances tended to the injured and dying.

Piers added: ‘For years, Travis Scott has extended his middle finger to crowd safety and security. On Friday night, that shamefully reckless attitude to the welfare of his own fans led to a deadly disaster.

‘He can pretend he’s shocked and can’t believe it happened. But these are the weasly words of a man now facing civil and possibly criminal court action, desperate not to be blamed for crowd activity that his incendiary rhetoric for many years has encouraged.

‘Travis Scott has the blood of his dead fans on his extended middle finger.’

Both Travis and his pregnant girlfriend Kylie Jenner had told fans they were unaware of the severity of the incident at the time.

Kylie wrote: ‘Travis and I are broken and devastated. My thoughts and prayers are with all who lost their lives, were injured or affected in anyway [sic] by yesterday’s events.

‘And also for Travis who I know cares deeply for his fans and the Houston community. I want to make it clear we weren’t aware of any fatalities until the news came out after the show and in no world would have continued filming or performing.

‘I am sending my deepest condolences to all the families during this difficult time and will be praying for the healing of everyone who has been impacted.’

Travis also told his followers in an emotional video: ‘Anytime I can make out anything that’s going on, you know, I stop the show and you know, help them get the help they need. I could just never imagine the severity of the situation.

‘To the ones that was lost last night, we’re working right now to ID the families so we can help assist them through this tough time.

‘I’m honestly just devastated… I could never imagine anything like this just happening.’