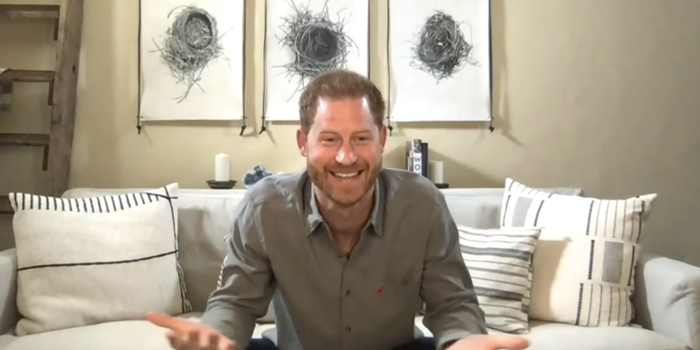 Prince Harry made a surprise appearance on the UK's version of "Dancing with the Stars" on Saturday to offer a touching message of support to one of the contestants.

In one of his first TV appearances since the Duke and Duchess of Sussex moved to LA, Harry spoke via video link with "Strictly Come Dancing" contestant JJ Chalmers — a veteran — and dance professional Amy Dowden, as they rehearsed.

Clips from the encounter were broadcast on the live show on Saturday evening local time, where Harry gave a heartfelt message of encouragement to Chalmers and teased him about his "tight blue shorts."

Harry watched Chalmers and Dowden rehearse their number for the wildly popular primetime BBC show in the video call, in which celebrity contestants pair up with professional dancers in a week-by-week knockout competition.

Chalmers and Dowden's dance was a tribute to the armed forces, a jive set to "Boogie Woogie Bugle Boy" — with their rehearsal gaining applause from Harry.

The prince met Chalmers through the Invictus Games, Harry's foundation in which wounded or sick veterans compete in sports.

Chalmers formerly served as a Royal Marine in Afghanistan, where he sustained severe injuries, including the loss of two of his fingers.

"When I first met JJ he was a shell of himself," Harry said on the video call. "But then to see you shine through Invictus and feel like yourself again, that was the start of an amazing journey."

"The simple fact is, if Prince Harry had not created the Invictus Games, I would not have had that catalyst moment that changed my life forever. I wouldn't be here without him," said Chalmers, adding that Harry's goal had been to enable injured veterans to have an "impact on society."

"You're definitely having an impact on society now," said Harry. "Especially when you're wearing those tight blue shorts."

As well as teasing Chalmers about his rehearsal shorts, he also asked to see his dancing shoes, which the veteran duly showed him.

"Look at that! And the socks pulled up. It doesn't get better than that," said Harry.

More seriously, he added: "I'm so proud, genuinely proud, here you are in this position now. You're not a dancer, proving that you can do anything that you put your mind to, which is amazing."

Professional dancer Amy Dowden expressed amazement at the situation. "Definitely not your average training session to have Prince Harry call in on you. Just, wow," she said.

"He's a veteran, he's a friend, just like anybody else," Chalmers said, of Harry, who also served in Afghanistan.

Harry has made few TV appearances since he and Meghan Markle moved to LA after their split from the royal family.

The couple recently shared images of their Remembrance Day tribute.

They had requested that a wreath from the Sussexes be laid during the royal family's service on November 11 — but that request was denied, The Sunday Times reported.

When that request was denied, they were criticized for sharing photographs of their own private tribute, held in a California cemetery.