Queen Elizabeth, 95, has met with President Joe Biden, 78, and First Lady Jill Biden, 70, for tea at Windsor Castle. The British monarch hosted the couple on June 13, after meeting briefly at a reception two days prior. It marked Biden’s first sit-down with the Queen since his inauguration as President of the United States, and the royal’s first major engagement since her late husband Prince Philip passed away. 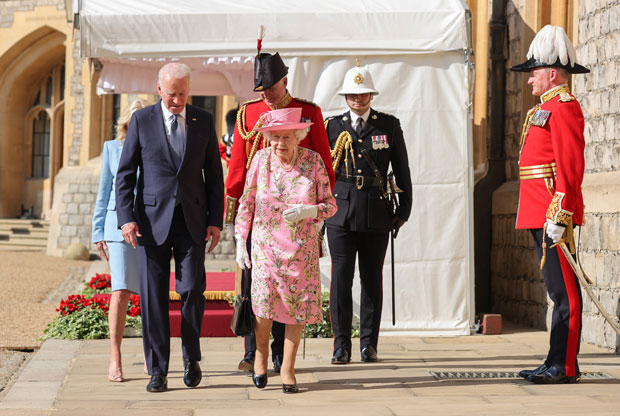 The trio met at the dais in the Quadrangle of the castle, and a Guard of Honor gave the First Couple a royal salute. They then had tea inside the historic castle, where the Queen has been residing for most of the past year. She stunned in a gorgeous blush pink dress with green floral detailing, along with a matching hat hat, white gloves, black heels, and a matching black handbag.

The First Lady wore a baby blue skirt suit with a matching blazer, as she styled her blonde hair in loose waves. Meanwhile, her husband wore a dark grey suit with a powder blue tie. The couple had travelled to Windsor from the G-7 Summit held in Cornwall, England, making Biden the 13th American president to meet the Queen during her near 70-year reign. 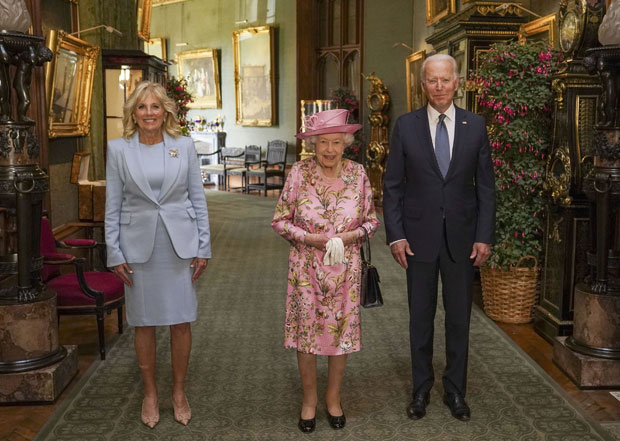 It came a few days after the reigning monarch hosted a reception for a number of world leaders at the Eden Project botanical garden on Friday, June 11. Queen Elizabeth was beaming as she wore a white and pink floral patterned dress. Jill stunned in a beige colored trench coat alongside a host of world leaders including Canadian Prime Minister Justin Trudeau, 49, who sported a light gray suit with a pink tie.

In other snaps, Joe and Jill could be seen chatting with United Kingdom Prime Minister Boris Johnson and his wife Carrie, as well as talking to Prince Charles, 71. “Joe and I are both looking forward to meeting the Queen,” Jill said ahead of the trip, marking their first overseas visit since Joe became president. “That’s an exciting part of the visit for us,” she added.