Charles Saatchi is so reclusive that he famously never attends parties — even those given by himself.

But at the weekend the 76-year-old art tycoon broke cover to make a rare public appearance for the wedding of his only child, Phoebe, as she married designer Arthur Yates at Chelsea Old Town Hall.

‘Charles looked happy,’ an onlooker tells me. Phoebe, 24, who wore traditional bridal white, and Arthur, tieless like his prospective father-in-law, arrived together and waited on the King’s Road before mounting the steps into the Register Office.

They were followed by Saatchi and Woodall, and an intimate party of friends and family, including Phoebe’s mother, Kay – the second of Saatchi’s three ex-wives — and photographer and film-maker Amanda Eliasch, ex-wife of tycoon Johan Eliasch, a former deputy treasurer of the Conservative Party. 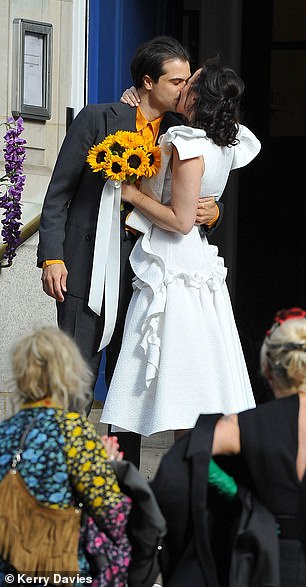 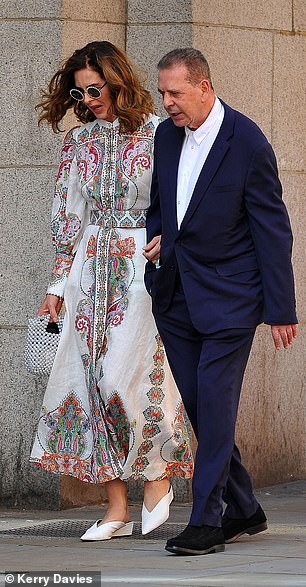 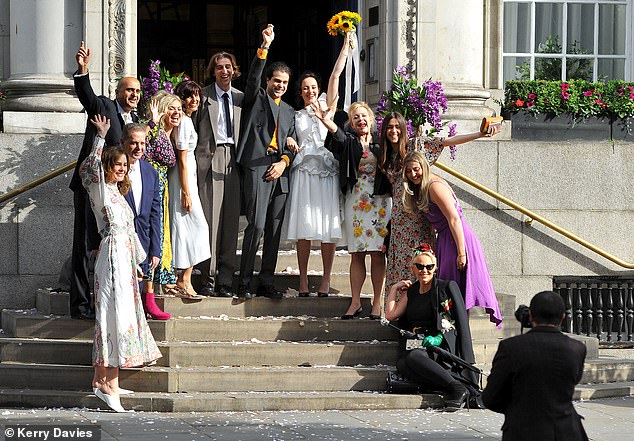 (Not present was Phoebe’s former step-mother, domestic goddess Nigella Lawson, from whom Saatchi was acrimoniously divorced in 2013.)

After signing the register at 5 o’clock, the newlyweds walked down the steps into clouds of confetti as Phoebe waved a bouquet of sunflowers to match her beau’s shirt.

I’m told: ‘Trinny was darting about taking pictures on her phone, and Charles was floating around the edge of the party.’

Arthur, 28, who set up fashion label Bruta in 2015, seemed struck at one moment by the enormity of his new status.

‘He put his hands over his face — he looked a bit stunned about it.’

But there were huge smiles moments later from bride and groom as they posed for official photographs, before heading off for further celebrations, which were kept deliberately discreet.

‘That’s what Phoebe wants,’ explains a friend. ‘She’s very private, like her father.’ 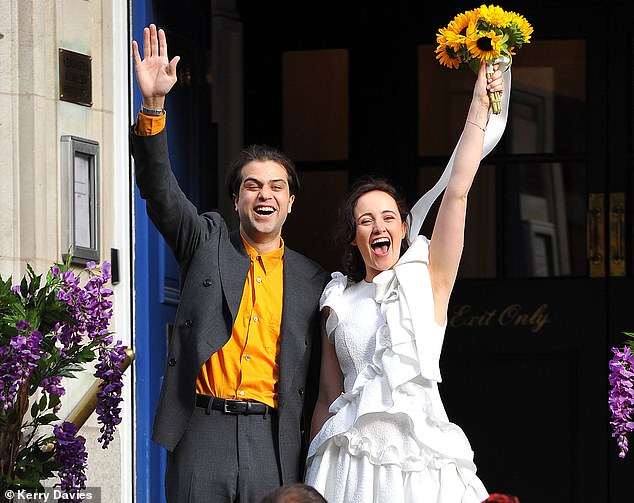 The 46-year-old opened up when she posted a picture of herself online from a masquerade ball in London, where she turned heads in a £730 Yves Saint Laurent waistcoat.

‘I used to be such an introvert,’ she explains. ‘When my first TV show came out, I was so nervous about doing the red carpet. I’ve been working on going out more and saying yes to experiences.

‘Being around people is invigorating and fun. It helps introverts to get out of overthinking.’ 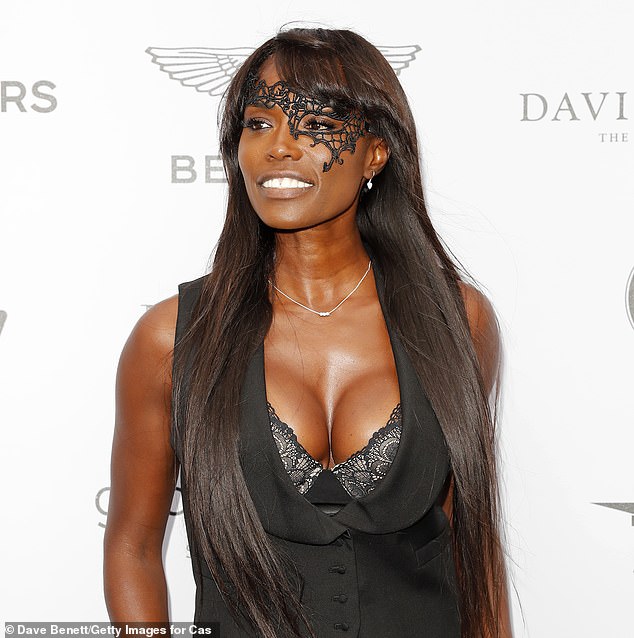 Sixties icon Viviane Ventura’s husband, the Hollywood producer Errol Wetanson, will be buried tomorrow, little more than a week after they were married in an emergency room at a hospital in Florida.

‘He will be wearing his favourite shirt and tie, and taken to New York to be buried,’ the actress tells me. ‘I am expecting a lot of people at the funeral.’

As the Diary reported on Saturday, Wetanson, 78, the ex-husband of model Margaux Hemingway, died following a heart operation.

Among the mourners will be Ventura’s daughter Sheherazade Bentley, ex-wife of Tory high-flyer Zac Goldsmith.

‘He had been asking me to marry him for five years,’ says Ventura, 73, who was the official mascot for England’s winning World Cup squad of 1966.

‘He kept writing me notes from his hospital bed, saying, ‘Please marry me’. So I said yes.’

He’s best known for his TV talk show segment Carpool Karaoke, in which he drives pop stars around Los Angeles, but in another lifetime James Corden could have ended up in the passenger seat.

‘I was always forming bands at school,’ he says. ‘I don’t think I ever really had a band that was good enough that we thought, ‘Oh, we could do that.’

‘They all disbanded within three gigs, you know.’ Perhaps it’s best he stuck to acting. 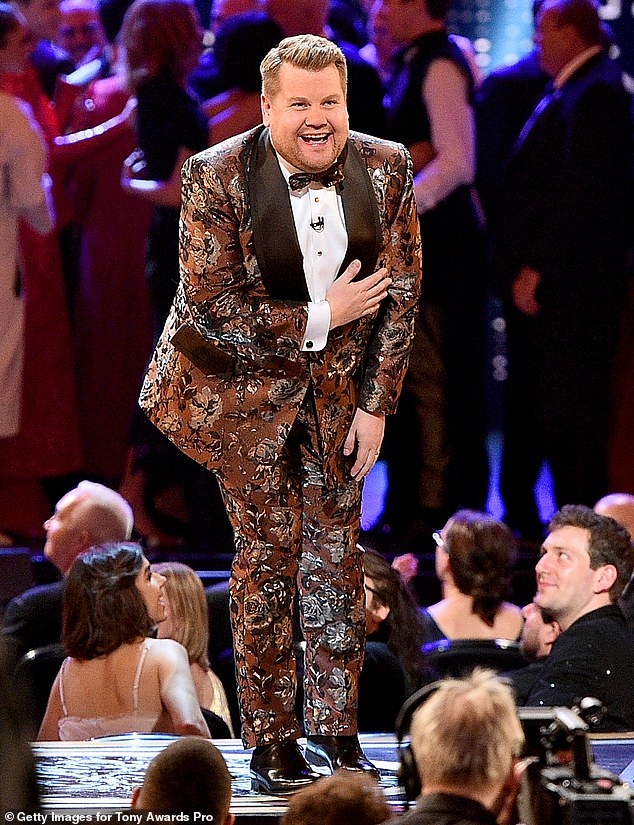 Princess Diana biographer Tina Brown described Boris Johnson as ‘an epic s–t’ in her Vanity Fair diaries after her first encounter with him in the Eighties.

It’s fair to say her opinion of the Tory leadership hopeful has not improved over time.

‘The thatched charlatan Boris Johnson, with his sliding allegiances and faux-Falstaffian ways, depends on everyone being in on the joke that he has no principles,’ she writes in Time magazine.

‘Now that he’s again the frontrunner in the Tory leadership contest to be the next prime minster, he has proved there is no lie you can’t recover from if you have mastered the sly vernacular of British irony and gone to Eton.’

At least there weren’t any four-letter words. 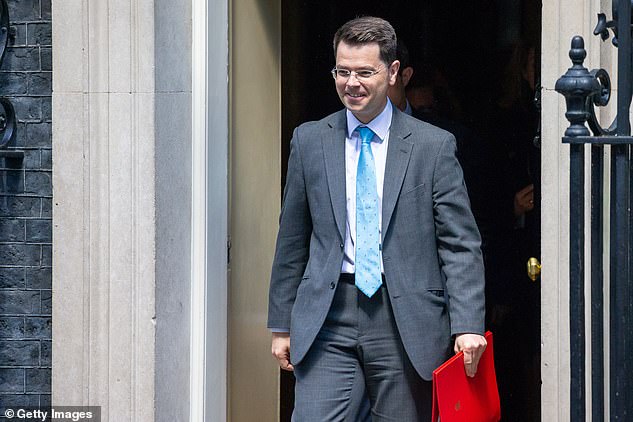 Given a roasting by jealous critics after he was revealed to be the owner of not one, not two, but four ovens, Housing Secretary James Brokenshire isn’t letting his extravagant kitchen go to waste.

Now nicknamed Four Ovens, he arrived at a birthday party for one of his special advisers at the Prince of Wales pub in Kennington, South London, carrying a freshly baked sponge cake filled with chocolate.

A colleague quips: ‘He’ll be on Celebrity Bake Off next.’