New privacy regulations are springing up around the globe at a rapid pace on the heels of Europe's General Data Protection Regulation and California's Consumer Privacy Act taking effect the past few years.

Publishers and marketers are turning to technology companies to stay on the right side of this patchwork of global data privacy laws and avoid huge fines.

One of the companies capitalizing on the increased focus on data privacy is Sourcepoint. The US-based technology company has a platform that lets publishers and advertisers get legal consent from people to use their data.

Sourcepoint said Tuesday it had raised $17 million in additional funding, led by new investor Arrowroot Capital, bringing its total funding to $47.8 million since it launched in 2015. Arrowroot Capital partner Kareem El Sawy will join the Sourcepoint board as part of the transaction.

Ben Barokas, Sourcepoint co-founder and CEO, told Business Insider plans to use the additional investment to fund acquisitions and new product development. The company — which has offices in New York, London and Berlin — also wants to expand to Asia, Australia and South America, he said.

Read more: Apple is poised to rewrite its privacy rules for advertisers — here's what's at stake for all the players

Sourcepoint grew significantly in 2020, a year when big technology companies also drove the privacy agenda. Google announced in January it plans to drop support for third-party tracking cookies in Chrome and Apple in June said it would give consumers more control over whether they can be tracked by apps and their vendors. So far this year, Sourcepoint's revenue is up 107%, according to a spokesperson, though the company declined to offer dollar figures. Nor would Sourcepoint comment on the company's current valuation.

"There are significant discussions about what's happening with the depreciation of the cookie and [Apple's Identifier for Advertisers]," said Sourcepoint co-founder and COO Brian Kane. "That's driven a lot of discussion for us about product ideation as we think about ways we can support our stakeholders and constituents as they think about a world where personalization will be different."

See the key slides from the pitch deck Sourcepoint used to help it raise its latest funding.

Sourcepoint is trying to capitalize on marketers' need to comply with privacy regs. 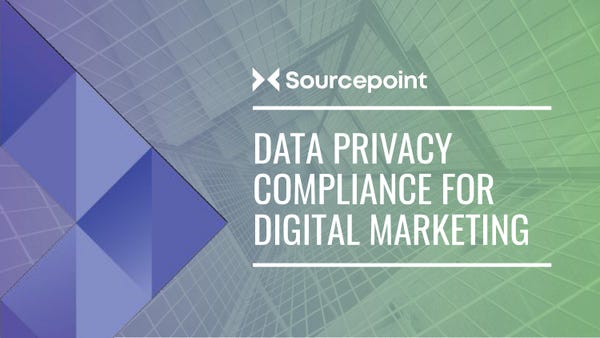 Its co-founders Barokas and Kane are adtech veterans. 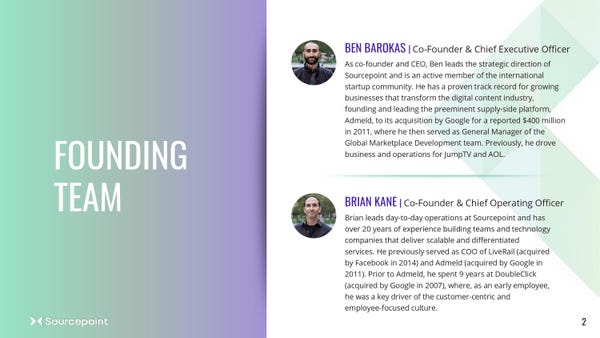 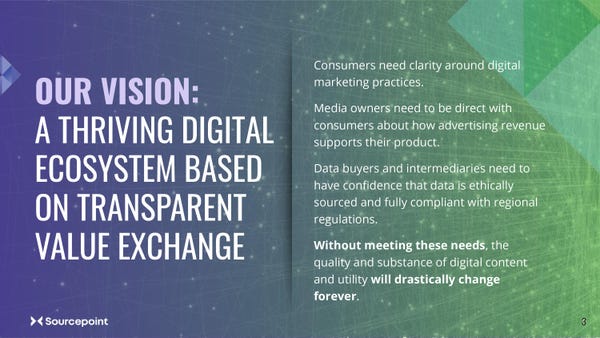 When Sourcepoint was founded in 2015, one of its core products was a technology designed to claw back revenue lost to ad blockers.

Barokas said in 2015 that ad blocker usage had accelerated through a "crisis" faced by digital publishers and their difficulty in being able to make money from their online audiences. 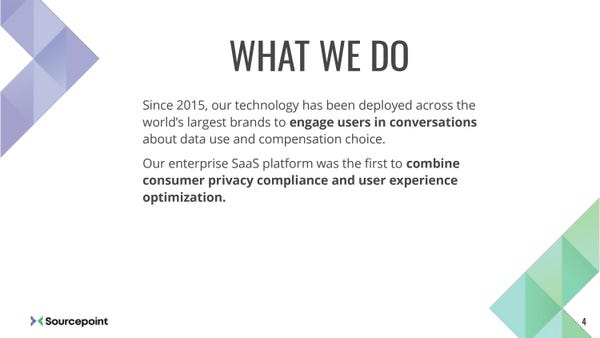 Consumers are becoming more concerned — and knowledgeable — about how their data is used online. 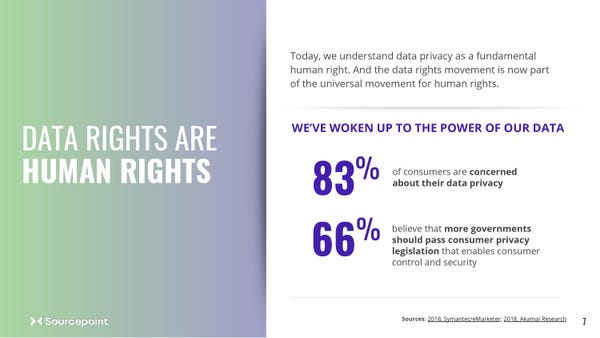 The company cites a 2018 survey of 1,000 U.S. consumers conducted by tech firm Akamai, which found that 66% of respondents believe more governments should pass consumer privacy laws that enable more consumer control and security.

Part of its pitch is that regulators are beginning to impose hefty fines on companies for flouting data-privacy rules. 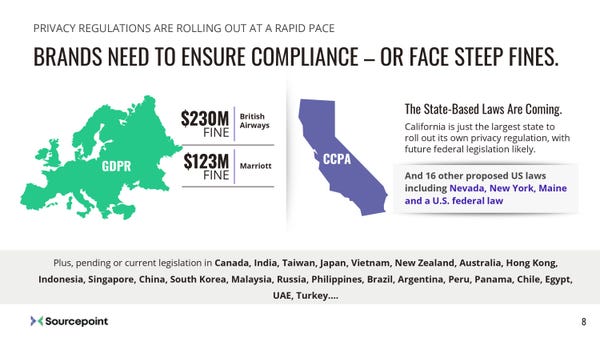 Sourcepoint says there are at least 16 other proposed privacy laws in US states including Nevada, New York and Maine.

Companies also are having to contend with tech companies like Apple throttling their access to user data. 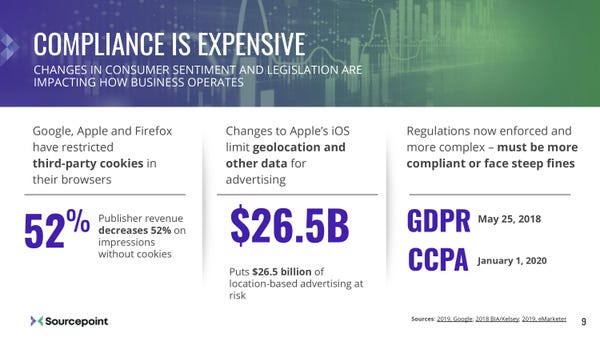 Meanwhile, browsers including Apple's Safari and Mozilla's Firefox have restricted the use of third-party cookies. Google has said it will end support for third-party cookies in Chrome by 2022. Sourcepoint cites Google research that suggests publisher's earn 52% less revenue on impressions that don't include cookies.

Sourcepoint says consumers are more likely to share their data if companies are honest about why and how they want to use it. 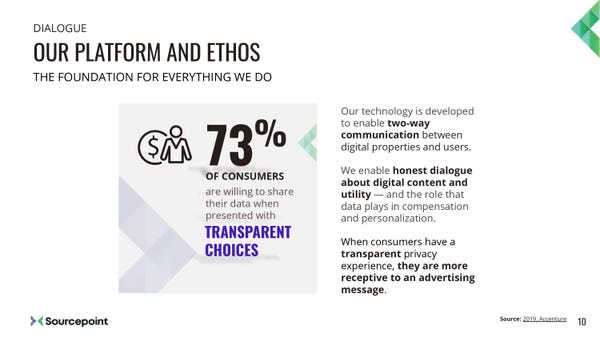 Alessandro De Zanche, founder of media consultancy ADZ Strategies, said companies like Sourcepoint are finding success as the need for publishers to be legally compliant with a vast web of privacy laws has become more pressing.

"The winning point for the future is being upfront and transparent by saying, 'This is why we are asking for your consent' but also, 'This is the benefit to you'," said De Zanche. "We are always telling people why we need their data but not what's in it for them, it has to be more evident, more explicit and that's also an opportunity to have a deeper dialog that can benefit many other areas," such as publishers' subscription or login strategies.

Sourcepoint is growing its products. 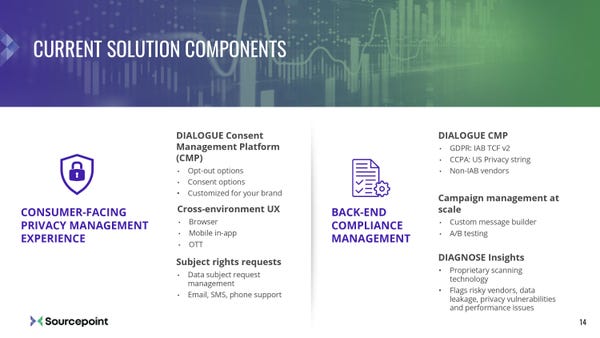 Sourcepoint's core product Dialogue is a consent management platform that tells users how their data is shared and lets them opt in or out. 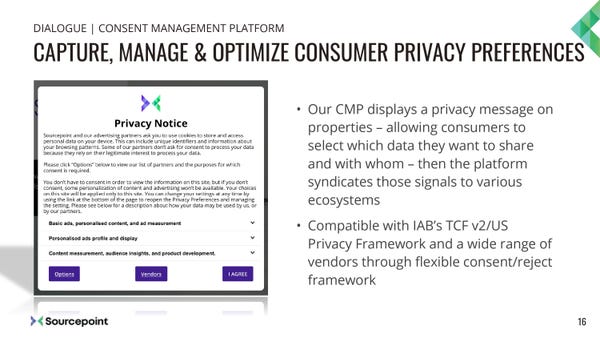 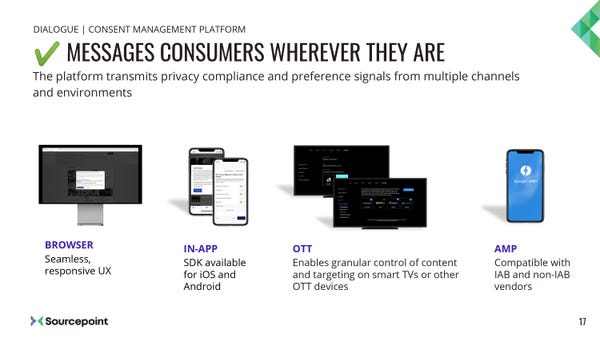 Website owners can customize Dialogue so it fits their brand. 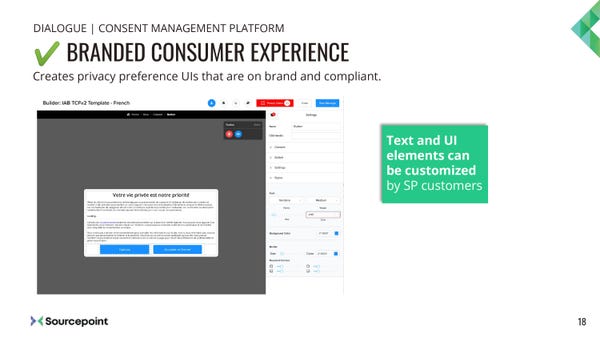 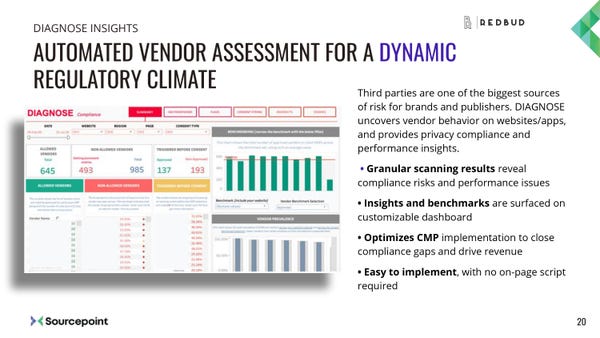 Diagnose displays potential risks companies might be exposed to by their vendors. 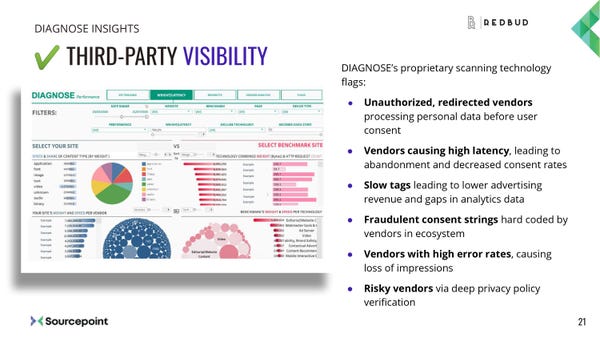 Diagnose and Dialogue work together to enable ongoing monitoring of a companies' list of vendors. 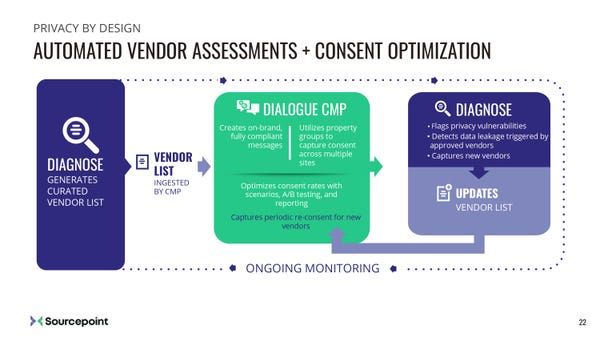 Sourcepoint says data privacy and ethics will continue to be big trends in 2021 and beyond. 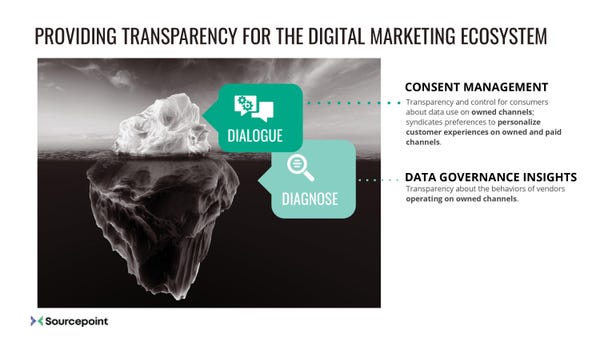 Barokas said Sourcepoint plans to develop products that focus more on marketers' needs and tools that provide simpler ways for consumers to pay for publisher content.