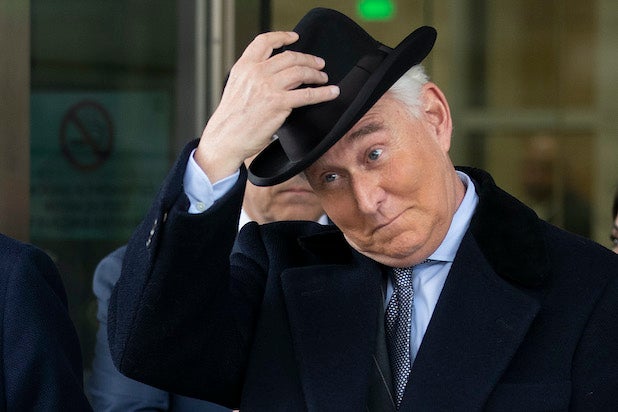 Roger Stone used a racial slur during a radio interview with Mo’Kelly, who is Black.

The conservative political consultant and convicted felon who dodged a prison sentence thanks to his friend, President Trump, has been making the media rounds since his commutation on July 10. One of his stops was Saturday on “The Mo’Kelly Show,” hosted by Morris W. O’Kelly.

O’Kelly questioned Stone if his close relationship with the president was a factor in the commutation of his 40 months in a federal prison sentence.

“There are thousands of people treated unfairly daily, how your number just happened to come up in the lottery, I am guessing it was more than just luck, Roger, right?” O’Kelly asked.

Sounding as if he was speaking to someone in the room with him, Stone can be heard mumbling something about, “arguing with this Negro.”

Having heard Stone’s comment, O’Kelly asked him to repeat it. Stone let out a sigh and went radio silent. O’Kelly broke the long pause and confronted him on using the slur, which Stone fervidly denied.

“I did not, you’re out of your mind,” Stone answered firmly.

The interview continued, albeit awkward. Afterward, O’Kelly told his audience that he went on with the interview because it was his job to do so, “to keep him talking for your benefit, as the audience, and my benefit to have that conversation.”

The interview can be heard in full by clicking here.

After the show, O’Kelly wrote in a blog post, “He didn’t see me as a journalist, not as a professional, not a radio host…but a ‘Negro’ first and foremost. Thirty years as an entertainment professional, twenty of them in radio. ‘Negro’ was the first pejorative uttered. The low-calorie version of the N-Word.”

For his part, Stone told the Daily News in an email Sunday that he wasn’t the one who used the word, that it was O’Kelly’s studio engineer.

“His studio engineer can very clearly be heard using the epithet after he cut my sound feed three times,” Stone said. “Why is it that everyone on the left must label anyone who disagrees with them as ‘a racist?’ … I despise racism!”