“I believe it’s time for a fundamental rethink of social media and how it spreads hate, conspiracies and lies,” Cohen says 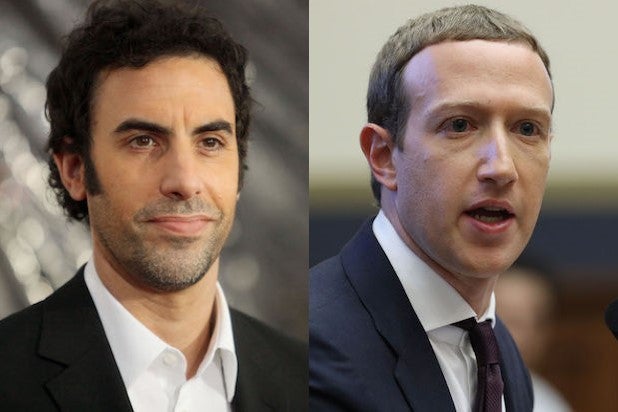 Comedian Sacha Baron Cohen isn’t joking around when it comes to Facebook and its chief executive Mark Zuckerberg. Cohen, speaking Thursday at the Anti-Defamation League’s “Never Is Now” Summit in New York City, skewered Facebook for not doing enough to combat racism and anti-Semitism on its platform.

Cohen said Zuckerberg’s stance that “people should decide what’s credible, not tech companies” — outlined during a speech last month at Georgetown University —  is “simply absurd.” Instead, it allows misinformation and bigotry to thrive, Cohen argued.

“I believe it’s time for a fundamental rethink of social media and how it spreads hate, conspiracies and lies,” Cohen said, before listing a number of issues he has with Zuckerberg.

“First, Zuckerberg tried to portray this whole issue as ‘choices…around free expression.’  That is ludicrous.  This is not about limiting anyone’s free speech.  This is about giving people, including some of the most reprehensible people on earth, the biggest platform in history to reach a third of the planet,” Cohen said, “Freedom of speech is not freedom of reach.”

In particular, Cohen pointed to Zuckerberg’s comments from last year, where he said he finds Holocaust denial “deeply offensive,” but that he doesn’t believe Facebook “should take that down.” That is an irresponsible policy, Cohen said, when considering how ignorant American citizens — especially under the age of 35 — are of the Holocaust.

“There is such a thing as objective truth.  Facts do exist,” he continued.  “And if these internet companies really want to make a difference, they should hire enough monitors to actually monitor, work closely with groups like the ADL, insist on facts and purge these lies and conspiracies from their platforms.”

Cohen’s comments add to a growing list of complaints from both the left and the right over Facebook’s content moderation policies.

Earlier this year, Facebook removed a number of far-right individuals, including Alex Jones and Milo Yiannopoulos, as well as Nation of Islam leader Louis Farrakhan, for violating its policies on “dangerous individuals and organizations.” The move was criticized by many free speech absolutists, arguing tech giants like Facebook should not be in the censorship business.

Since then, Facebook has since been skewered by many on the left — including 2020 presidential hopeful Elizabeth Warren — for its decision to not fact-check political ads.

“I know many people disagree with us,” Zuckerberg said about Facebook’s policy last month.”But in general, I don’t think it’s right for a private company to censor politicians or the news in a democracy.”

On free expression, Zuckerberg said he wants Facebook to take after the “American free speech tradition,” but said there were still some exceptions Facebook would make as a private company. “Hate speech” — even though it’s protected by the First Amendment, Zuckerberg noted – would not be tolerated, as well as pornography, child exploitation and calls to violence.  Saying “all Muslims are terrorists,” Zuckerberg said, could potentially “escalate” the situation and make matters worse.

Cohen, during his ADL speech, said it’s “madness” for Facebook and other tech companies to hide behind the First Amendment; companies, unlike the government, should make decisions on what is and isn’t said on their platforms, Cohen argued.

“By now it’s pretty clear, they cannot be trusted to regulate themselves,” Cohen said of Silicon Valley. “As with the Industrial Revolution, it’s time for regulation and legislation to curb the greed of these high-tech robber barons.”