SEBASTIAN SHAKESPEARE: We will fight them on the allotments! Locals go into battle with Duke of Marlborough at Churchill estate

The Battle of Blenheim is being re-fought, with the Duke of Marlborough leading the charge.

But, unlike his illustrious ancestor 216 years ago, the Duke doesn’t have tens of thousands of French in his sights but a rather smaller force – the allotment holders of the Oxfordshire village of Cassington.

This motley army has been infuriated by a plan by the Duke’s Blenheim Estate – birthplace of Winston Churchill – to eradicate Cassington’s allotment site and replace it with 45 new houses. 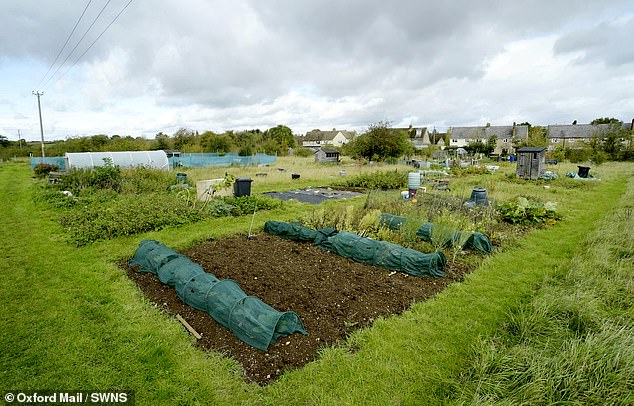 Allotment holders, led by the Duke of Marlborough, are infuriated by the Duke’s Blenheim Estate plan to eradicate Cassington’s allotment site and replace it with 45 new houses 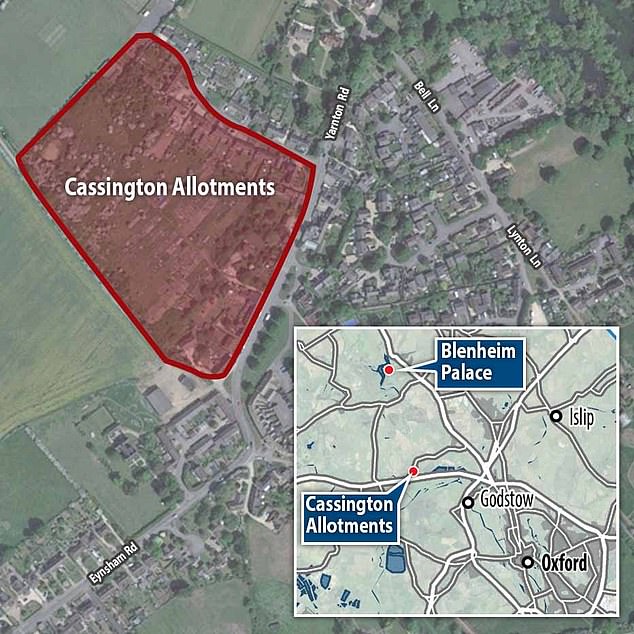 The Save Cassington Allotments campaign allege that the allotments site (above) is ‘effectively a flood plain’, and add that ‘lack of research’ by the estate of this fact is ‘terrifying’

In a petition initiated by vegan schoolteacher Jaime Johnson, a mother-of-two, the Save Cassington Allotments campaign accuses the estate of being motivated solely by profit and proposing a ‘gross over-development’.

Livid that the increased flood risk to current homes ‘is not mentioned’ in the estate’s proposal, Johnson and her supporters allege that the allotments site is ‘effectively a flood plain’, and add that ‘lack of research or acknowledgement’ by the estate of this fact is ‘terrifying’.

The Blenheim plan will also, claim Johnson and her allies, imperil the habitat of rare and protected species — from owls and slow-worms to lizards and rare invertebrates, ‘such as the Rugged Oil Beetle’ — and fails to take into account Cassington’s ‘inadequate, old and failing sewage system’.

‘We have no post office, shop or bus service,’ adds Johnson, who also points out that Cassington’s primary school is already over- subscribed and alleges that ‘traffic is becoming dangerous in the High Street which is a rat-run for commuters’. 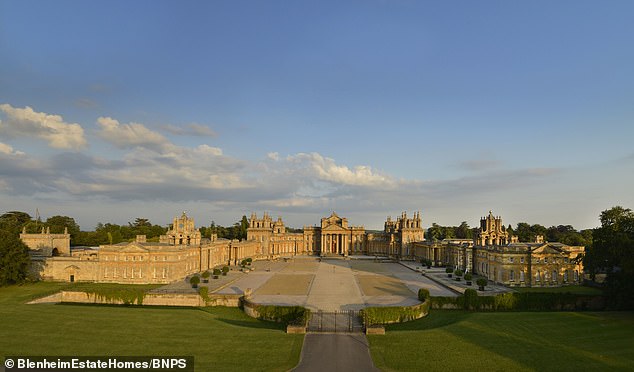 The Blenheim Estate (property pictured) said ‘no allotments will be lost’ due to the development, but adds that ‘the size of individual plots will be reduced’ 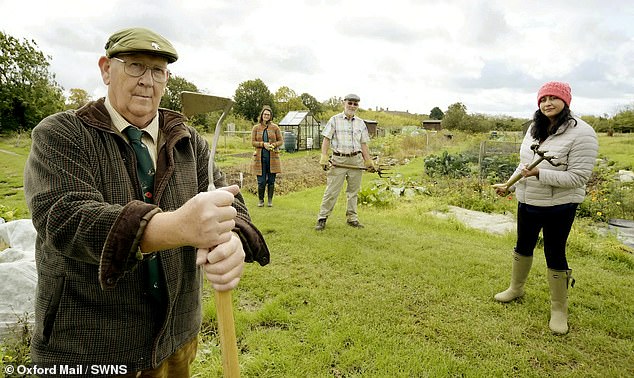 The Blenheim Estate tells me that the consultation process, which began a year ago, is still under way and says that Cassington offers ‘an exceptional opportunity’ for ‘truly affordable homes in an area desperately in need of properties that both local people and key workers can afford to live in’.

‘No allotments will be lost as a result of the development,’ adds the spokesman, ‘although the size of individual plots will be reduced.’

No question of carving up the lawns at Blenheim, I trust.

Linda Evangelista memorably declared that she wouldn’t get out of bed for less than $10,000 a day, but fellow top model Sophie Dahl has agreed to work free of charge — for her husband.

Roald Dahl’s granddaughter, 43, said yes to posing with jazz musician Jamie Cullum, 41, whom she married ten years ago, for the sleeve of his new big band album, The Pianoman At Christmas. 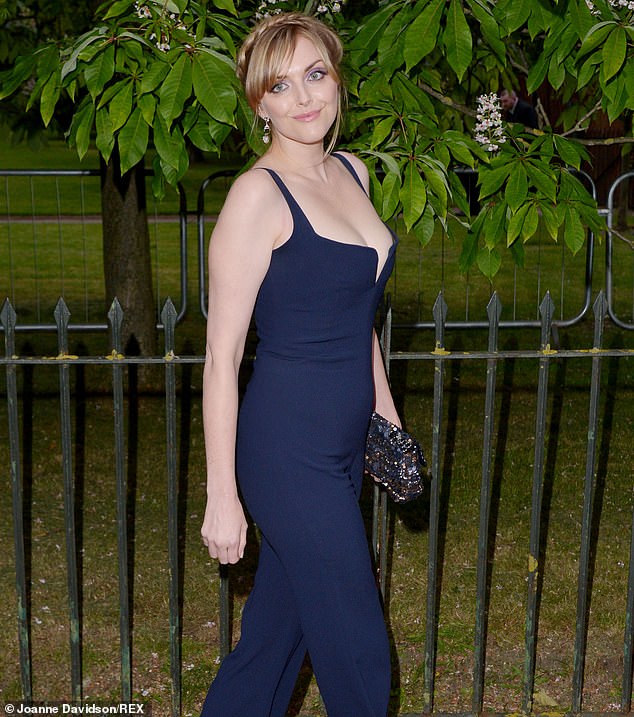 Sophie Dahl, 43, agreed to posing with jazz musician Jamie Cullum, 41, whom she married ten years ago, for the sleeve of his new big band album 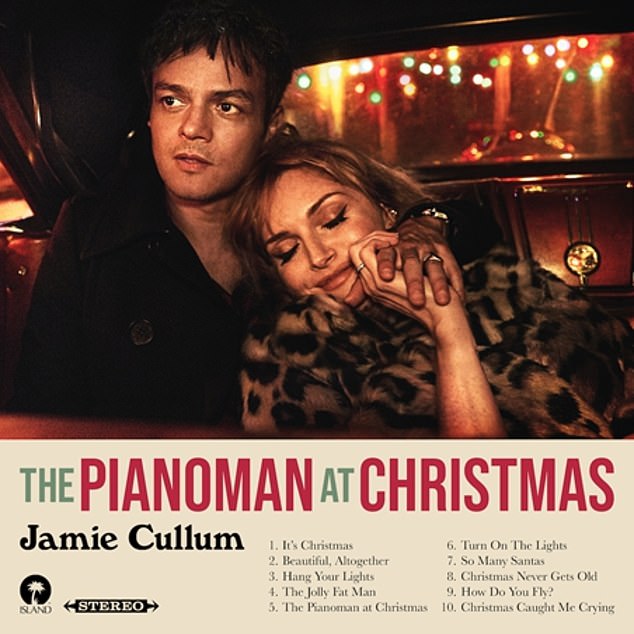 The cover of Cullum’s new album, The Pianoman At Christmas, features the couple cuddling on the back seat of a car

The cover features the couple, who have two daughters together, cuddling on the back seat of a car.

Cullum boasts he didn’t have to spend a single penny. ‘My wife agreed to do the photoshoot for free,’ he says at the launch event of the album, to be released next month.

Socialite Tamara Beckwith has always had plenty of vroom. But last Friday she felt as deflated as a flat tyre on discovering her Range Rover had been stolen in London.

Her Chelsea tractor was eventually recovered, thanks to an inbuilt tracking and immobilisation system.

‘I always look for silver linings and mine was meeting and being accompanied by two super police officers,’ says Tamara, 50.

It was a happier outcome than back in 2014 when she was fined £900 for refusing to say who was driving her speeding Porsche.

Singer Toyah Willcox, who had a hit in the Eighties with It’s A Mystery, is baffled as to why the BBC slapped a warning on episodes of Brum, the harmless BBC children’s show she narrated.

A notice on iPlayer repeats told viewers the series may reflect out-of-date ‘language and attitudes of the Nineties’.

The flame-haired singer tells me: ‘I can’t think why they did that. Was it because of the Birmingham accent? Is it sexist in some way? I’m sure we never impersonated a black person.’

Toyah adds: ‘I always refused to do anything if it was offensive. Brum was written by Anne Wood who made Teletubbies and she was on top of all that sort of thing.’ 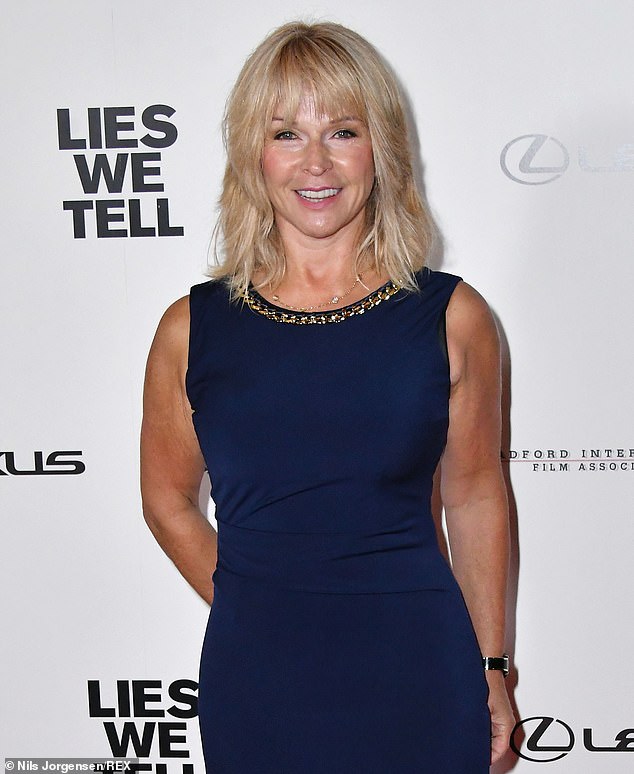 Singer Toyah Willcox (above) is baffled as to why the BBC slapped a warning on episodes of Brum, the harmless BBC children’s show which she narrated

The BBC says the notice was added in ‘error’ and has been removed from Brum episodes.

Perhaps it is the BBC, with its determination to censor TV classics, that is out of touch with today’s audiences?

Bridget Jones star Celia Imrie has found a novel way of keeping fit during the pandemic.

‘While we’ve all been in lockdown, sometimes it’s a bit frightening to go out,’ she says.

‘So, I decided that every evening at about 6.30, I would dance six Scottish reels and that would be my exercise. ‘I still do it — it’s exhausting but marvellous. Hopefully, it’s keeping me fit. It’s a total joy and makes me laugh.’

Prince Charles’s aides have come up with a pragmatic solution to the Scottish government’s rule that licensed premises must close at 6pm.

Charles’s restaurant, the Rothesay Rooms, which he set up in the Highlands village of Ballater, has been contacting guests who had dinner bookings to suggest they opt instead for lunches ‘lasting until the 6pm curfew’.

The baronial-style restaurant, which Charles established to boost Ballater following the severe flooding in 2015, is popular with locals — including the Prince himself, who often dines there with Camilla when they are in residence at nearby Birkhall on the Balmoral estate.

So it’s no wonder that the ‘long lunch’ places were all snapped up within minutes.

But if HRH wants to drop by, he will have to sneak in his usual aperitif — a Martini made with equal parts gin and dry vermouth — in his monogrammed hipflask, as the restaurant can no longer serve alcohol.

Let Lumley lull you to the land of nod

What better way than to drift off to sleep with Joanna Lumley reading you a bedtime story? The Ab Fab star has recorded her first ever audiobook for children. 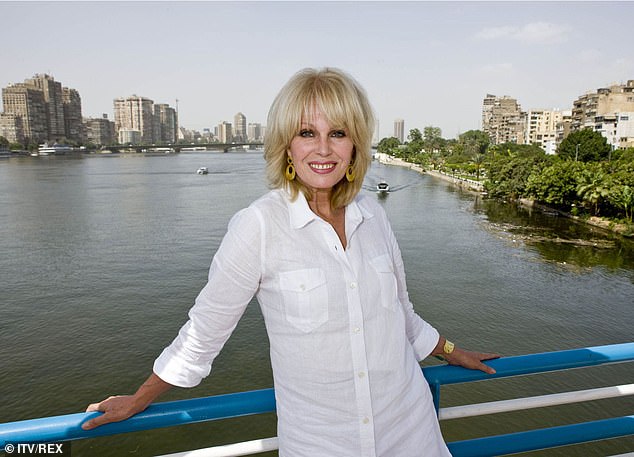 During lockdown, Joanna Lumley has recorded her first ever audiobook for children, called 5-Minute Really True Stories For Bedtime

Called 5-Minute Really True Stories For Bedtime, it was made during lockdown after an ITV travel series she was due to film about the Spice Route was cancelled.

‘Joanna felt this recording was a great way to make a small contribution,’ says her publisher. ‘She said afterwards she felt ‘a little younger and wiser’ as a result.’ And so to bed.

Do not be alarmed if you hear actress Emily Mortimer talking gibberish.

‘I’m a turbo-charged person until about nine, and then I’m just exhausted from having whirred my brain so much,’ she says.

‘I can’t really function, and I start dribbling and making no sense.’

Talk about biting the hand that feeds you.

Burberry model Iris Law, 19-year-old daughter of film star Jude Law and his ex-wife Sadie Frost, has made an impassioned attack on the fashion industry.

‘Fashion is, in fact, one of the most polluting industries and biggest employer of slave labour worldwide,’ she says.

‘A massive shift is needed in the industry to push towards being more environmental.’ 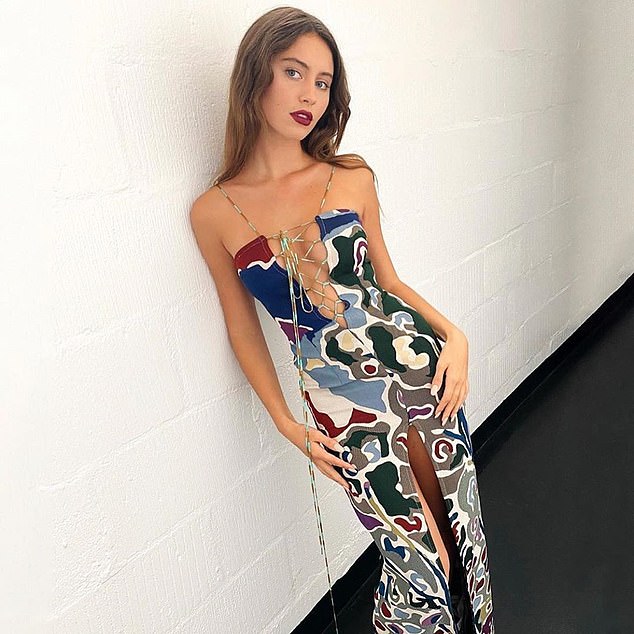 Model Iris Law, 19, made an impassioned attack on the fashion industry and wore a Missoni dress made from recycled plastic bottles at the Digital Green Carpet Fashion Awards

To that end, she wore a Missoni dress made from recycled plastic bottles at the first-ever virtual Digital Green Carpet Fashion Awards on Sunday.

‘Events like Green Carpet help push this agenda,’ she says.

‘I don’t lose too much sleep over the ludicrous fact that I’ve won more Oscars than Leonardo DiCaprio, Cary Grant and Alfred Hitchcock put together,’ he says.

DiCaprio has one Oscar; Grant has only an honorary one, while Hitchcock was handed the Irving G. Thalberg Memorial Award after his five nominations failed to secure a gong.