British soul and pop band, Simply Red, fronted by Mick Hucknall, shared their annoyance over their plane apparently leaving without them on Twitter. Over a series of tweets the band explained what allegedly happened and aimed their frustration at British Airways.

An initial tweet described how the band were apparently waiting for their flight in an airport lounge when it took off without them but with their luggage on board.

They described the incident as “scary” and said that they had not been called to board the plane.

It read: “Imagine being on a plane and there’s a piece of luggage on it minus the passenger.

“We waited in the lounge. Flight on faulty board never once said boarding or last call.. nothing. 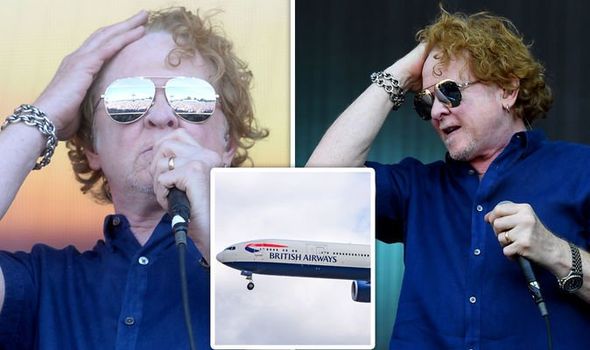 “No one paged for missing passengers, nothing.  Flight left with my luggage on board. Scary.”

This was followed up by another tweet that read: “Yes YOU! @British_Airways.”

A representative from British Airways responded to the tweet.

A rep wrote: “This is disappointing to hear. Please can you send us a Direct Message with some more details so we can take a look at this for you? Kev.”

Express.co.uk reached out to British Airways regarding the tweets, and a spokesperson said that they had been in touch with the band.

The spokesperson said: “We are in touch with our customer to resolve his issue.

“All bags are thoroughly security screened before they are cleared to fly.”

Express.co.uk has reached out to Simply Red’s representatives for comment.

The band are currently on an international tour and are set to perform at Bratislava, Slovakia this evening.

The tweets come after a month after frontman Mick Hucknall denied he had slept with 3,000 women.

The singer, 59, told The Sunday Times that the figure had been taken wildly out of context in previous interviews.

He clarified: “In the crazy days, it was screaming girls everywhere and it felt like you were sleeping with three women a day.”

He added that his past confessions were “conflated” and that he had “no idea” what the actual figure was.

The singer continued: “I have no idea. I don’t put chips on the bedposts.

“I haven’t a clue and have never thought about calculating.”

Mick has been married to Gabriella Wesberry for almost ten years.

He had previously been linked to many high profile women, including Catherine Zeta Jones, Helena Christensen and Martine McCutcheon.