Important update in the world of future Oscar-winning star of Cats Taylor Swift. She just performed at the AMAs and I’d describe the entire thing as subtle SHAAAAAAAAADDEEEEEE. We all knew Taylor would do something to address her ongoing feud with celebrity manager Scooter Braun and Big Machine Records CEO Scott Borchetta, but if you blinked, you might’ve missed it!

Taylor kept her performance cute, focusing on her many many hits, but she managed to slip in a lil shade that almost flew under the radar. As she danced and sang on stage, the background lit up…to look exactly like Big Machine Records’ logo. 👀

Taylor *also* kicked off the whole shebang in a white jacket with her album names’ on it (including the ones under Scooter’s control rn), while singing “The Man” with a young girl, which basically says it all.

Scooter Braun watching at home when Taylor opened with the man #AMAs pic.twitter.com/nrfrKAWDwb

🗣 @taylorswift13 opened with THE MAN: “I’m so sick of them coming at me again / ‘Cause if I was a man, then I’d be the man / They’d say I hustled, put in the work / They wouldn’t shake their heads and question how much of this I deserve.” #TaylorOnAMAs #AMAs pic.twitter.com/N0me4Rd1U6

If you’re finding yourself lost and confused about potential shade though, here’s a quick refresher: Taylor called out Scooter in a November 14 Tumblr post (where else?) titled “Don’t know what else to do,” slamming him and Scott for allegedly preventing her from performing old songs during the AMAs. 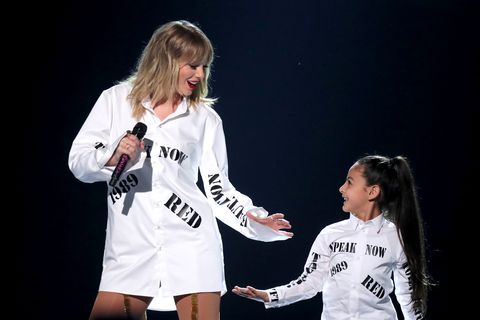 “I’ve been planning to perform a medley of my hits throughout the decade on the show,” Tay wrote. “Scott Borchetta and Scooter Braun have now said that I’m not allowed to perform my old songs on television because they claim that would be re-recording my music before I’m allowed to next year.”

Big Machine responded by being all “Taylor, the narrative you have created does not exist” (um, very rude), but one of their execs ended up telling TMZ that “Taylor Swift can 100% perform all of her catalog, past and present, on the AMAs.” Which brings us up to date! Though, uh, Scooter is apparently getting death threats from angry Swifties—so while it’s amazing that Taylor got to perform her songs, this situation seems far from resolved.