Aside from praising Gabriella Giudice, ‘The Real Housewives of New Jersey’ star shares a sweet message to her second eldest daughter as saying ‘I hope she always believes in herself.’

AceShowbiz –Teresa Giudice is clearly a proud mom. As Gabriella Giudice was dolled up for her prom, “The Real Housewives of New Jersey” star couldn’t help but gush over her daughter by saying that she was “absolutely stunning.”

The 40-year-old took to her Instagram feed to share some posts of her second eldest daughter’s prom. Along with a photo she uploaded on Friday, June 4, the reality TV star wrote in the caption, “Lovvve my girls [love] #gabriella #promdate #absolutelystunning.” In the snap, the 17-year-old daughter was seen wearing a maroon glam dress and posing with her older sister Gia Giudice.

In a separate post which Teresa uploaded on the same day, the TV personality was seen all smiles when striking a pose next to Gabriella. She captioned the post, “I hope she always believes in herself as much as I believe in her.” She then praised her daughter by adding, “My gorgeous Gabriella last evening!” Crediting the designer of the prom dress and the makeup artist, she detailed, “Dress @cocoschateau Hair & makeup @priscilladistasio.”

A day earlier, Teresa excitedly documented Gabriella when she was getting ready for the high school prom in a series of videos she posted to her Instagram Story. “Gabriella’s getting ready for the prom,” the mom of four was heard singing in the background of one video before praising her daughter, “Gabriella looks so beautiful! Look how beautiful you look! Look how beautiful she looks!”

In another clip, the “Turning the Tables: From Housewife to Inmate and Back Again” author zoomed in on her daughter in the makeup chair, gushing, “Wow. Oh, my God, you look stunning!” The Bravolebrity then proudly said, “You’re my child, and I made you!” 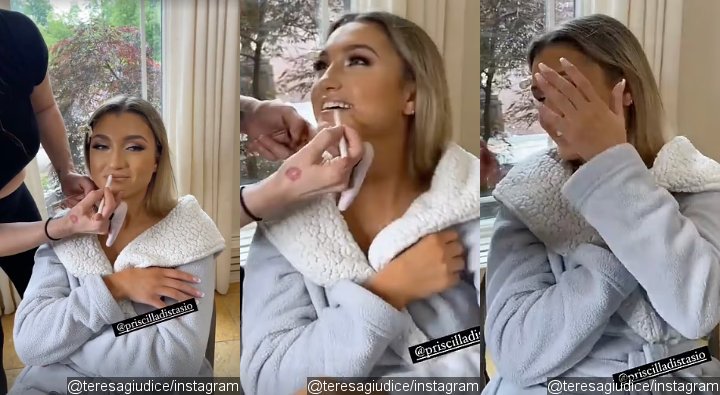 Teresa Giudice documented her daughter Gabriella when she was getting ready for her prom night.

When Teresa looked so excited, Gabriella, in the meantime, attempted to cover her face as her mom kept filming her. She simply said to the “Teresa Checks In” star, “All right, okay, Mom!” Though so, the ex-wife of Joe Giudice didn’t stop pointing her camera to her daughter as she continued to show off the teenager getting her hair styled. She cheerfully chimed in, “Her hair looks phenomenal. Oh, my God, you’re so stunning! I can’t help it. I made you. I made you. Love, love, love!”

Teresa shares Gabriella as well as 20-year-old Gia, 15-year-old Milania and 11-year-old Audriana with ex-husband Joe Giudice, to whom she was married from 1999 to 2020.