Home » Celebrities » The secret to Carol Vorderman’s smile? Not giving a monkey’s about what other people think

The secret to Carol Vorderman’s smile? Not giving a monkey’s about what other people think 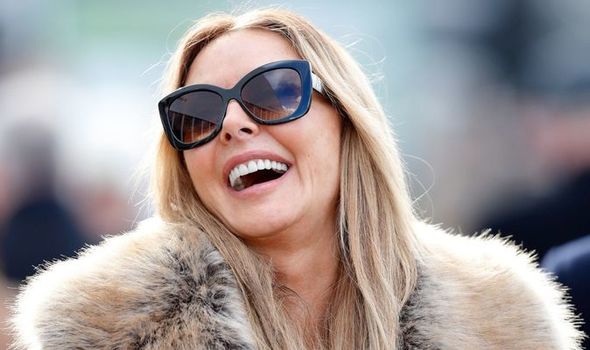 So how does the former Countdown star feel about having completed her sixth decade? Sixty may no no longer be the state pension age for women, but some still see it as the start of old-age.

“All that is rubbish,” she snorts. “Spiritual age and biological age are far more important than chronological age.”

So what IS her spiritual age?

“I’d go with 37 – and an immature 37 at that. I’m not going to tell you my biological age (she has done a metabolic test, she reveals), but it’s gone down quite a lot this year.”

Carol won’t let on exactly how she has de-aged herself – a book is in the works, apparently – but does insist she’s “quite healthy”.

She points to research her friend, the Astronomer Royal Lord Rees, sent her about happiness levels at different ages.

“It’s high in your twenties, and as you head towards your late 20s and into your 30s, it declines rapidly. Then as soon as you get to 60 it goes off the chart again,” she says.

“Generally, people my age are comfy in their own skin, particularly women who are less bridled by society telling us where or what we should be.”

She points to her own mother, Jean Davies, who died aged 89 four years ago.

“When my mother was my age, she was very worried about what people thought,” Carol explains. “I don’t care and I never have. I don’t give a monkey’s about what anybody other than my friends think about me.

“When I was 39 and wore a short dress to the Baftas, it was on the front page of every newspaper the next day. The BBC did a whole Kilroy show about it: ‘Should a woman aged 39 wear a dress above the knee?’ The audience was split. Half of them believed you should grow old gracefully.

“But what does that really mean? It’s a misogynistic language that keeps women in their place. Growing old gracefully means: ‘Stay quiet, you’ve had your time!

“In your 30s and 40s your whole life is centred around the children, every decision you make. Fundamentally they come first. I think it’s hard work, obviously you love your children, but you also worry about them.”

Then comes the menopause. “Your 50s can trip you up a bit like that,” she says.

Ah yes, the “M” word. Some four years ago, during a TV interview with Lorraine Kelly, Carol revealed she had suffered from hormonal depression – “bioidentical hormone replacement gels” finally sorted her symptoms within 36 hours – and the conversation, she believes, helped break the taboo.

“Previously women had to suffer in silence. I can remember hosting Loose Women five years before that and nobody talked about it.

“Even now, one of my daughter’s best friends has recently finished GP training and there was nothing about the menopause. She’s training herself but in standard training, as of a year ago, it wasn’t there.”

Having been married twice, Carol has no plans for another permanent relationship.

“Since I hit 50, I’ve never wanted to settle down. I was quite happy being a single parent by then. I have lots of male and female friends.

“My belief is we’re only here once, so that gives me a zest for living. I am alive and energetic to the point of annoyance. I cherish all the chapters. People often say it’s where you end up, but it isn’t, it’s the journey.”

If she has one regret – and it has to be prised out of her – Carol feels she was born 15 to 20 years too early when opportunities for women were much more limited.

“I didn’t dream, other than to be a fighter pilot, which wasn’t allowed to happen. Growing up in poverty in a Rhyl comprehensive on free school meals, you don’t get to be [Microsoft pioneer] Bill Gates.”

After graduating in engineering at Cambridge, aged 20, she put her possessions and her mother in her old Datsun and moved to Leeds to begin her TV career on Countdown. And where thousands of other daytime TV presenters vanished without trace, she thrived.

So what was the secret of her success?

“I make the most of opportunities,” she laughs. “Just do something that makes you happy. Also, I have a system, the kids and I use, called ‘marks out of ten’. You can do it about relationships, friends or your confidence, anything really.

“You should only use this if you accept seven or over is a win, but marking things is psychological. You realise how well everything is going. Try it.”

Today she is looking forward to receiving a new MAN Van – a converted camper van.

“I’m very lucky, because I’m able to do the glam when I feel like it, as well as living this other life: paddle boarding, hiking, having breakfast on Pembrokeshire beaches.”

It sounds idyllic, though this time last year, Carol admits, she was exhausted and unhealthy.

“I was teaching maths via my website, The Maths Factor. We’d normally charge a pound a week but instead of what other people did, which was up their prices, we went free. We had half a million primary school children register.

“That was a joy but it was exhausting. It is an excellent website. The kids adore it and they get their lessons from Auntie Carol!”

While she refuses to make firm plans until there is more certainty, adding: “Probably next year will be largely spent in the van in Scotland and Wales.”

Signing off, she points me towards the Buddhist word “muditā”, which means taking joy in the accomplishments of others – kind of a reverse schadenfreude.

“It’s when you’re genuinely happy when someone else does well. I’ve lived my whole life like that.”

Tomorrow, and her birthday today, will be spent with her adult children, Katie and Cameron – and she’s told them she doesn’t want a present… just having Christmas together is enough.