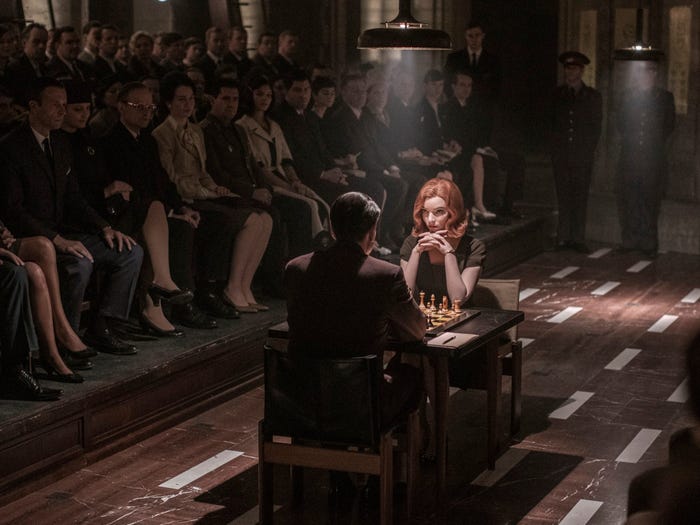 In the final episode of The Queen's Gambit, chess prodigy Beth Harmon (Anya Taylor-Joy) realizes her dream of traveling to Moscow to play Soviet rival Vasily Borgov (Marcin Dorociński). The year is 1968.

"The president has invited you to the Oval Office," Harmon's bodyguard tells her in the car ride to the airport following her win. "It's a big deal, beating the Soviets at their own game."

While Netflix's hit miniseries, adapted from Walter Tevis' 1983 novel of the same name, is fictional, it draws parallels to real life.

Just like in "The Queen's Gambit," chess became a stage for Cold War tensions between the United States and Soviet Union.

On July 11, 1972, eight-time US chess champion Bobby Fischer faced off against Russian player and reigning World Chess Champion Boris Spassky in what became known as the "Match of the Century." For 24 years prior, Russians held the World Championship title.

Its significance beyond the chess world became evident when National Security Adviser Henry Kissinger called Fischer on July 17 to persuade him to continue the match, Dominic Lawson, president of the English Chess Federation, wrote for BBC magazine in 2015.

Fischer had previously threatened to abandon the championship.

"That 1972 match in Reykjavik highlighted as nothing else the role of chess in a different sort of conflict —  the Cold War. For the Soviet Union, supremacy at the chess board was a demonstration — as its rulers saw it — of the superiority of their socialist system over the Western capitalist one," Lawson said.

"Everyone spoke of a duel between east and west, and that's what it was," the game's referee, Lothar Schmid, told The Local in 2012 in honor of the 40th anniversary of the game.

The match went on for months and spanned 21 games. Finally, on September 1, Fischer won.

In a column for the New York Times, chess expert Dylan Loeb McClain points out similarities between the character of Beth Harmon and Bobby Fischer, among them the fact that they grew up with little, became the youngest ever US chess champions, and studied Russian in order to learn from and best their Soviet rivals.

Tevis, in his author's note for "The Queen's Gambit," acknowledges that Fischer was an inspiration for the book.

While the two characters are similar, Harmon does not share Fischer's notoriously eccentric personality.

In the years leading up to 1972, "Fischer was labelled an insufferable diva and a psych-out artist who made life hell for tournament officials and tried to rattle opponents by complaining about, among other things, high-frequency sounds that only he and several species of mammals could detect," Rene Chun wrote for the Atlantic in 2002.

Following the 1972 match, the fame and press attention Fischer received led him to withdraw into a "weird, contrarian solitude he maintained more or less for the rest of his life," the New York Times reported upon his death in 2008.

As time went on, he devolved into paranoia and increasingly expressed anti-American sentiments. In a Philippine broadcast interview recorded on September 11, 2001, Fischer accused the US of using him as Cold War pawn.

"When I won the world championship in 1972, the United States had an image of, you know, a football country, a baseball country, but nobody thought of it as an intellectual country,"  he said, per the Atlantic. "[…] I was useful then because there was the Cold War, right? But now I'm not useful anymore. You see, the Cold War is over and now they want to wipe me out, steal everything I have, and put me in prison."

Fischer died in Iceland, where he was offered asylum in 2004 after violating international sanctions to play a chess match in Yugoslavia.

Being a book adaptation, the Queen's Gambit was produced as a limited series; however, given the show's popularity some have speculated about the possibility of a second season.