Tulsi Gabbard Has A Brutal Comment For Bezos’ Rocket Launch Jeff Bezos made history in July with the launch of his space shuttle Blue Origin. But reactions to his trip to space were mixed — and one prominent politician has made her opinion known.

On June 7, the Amazon billionaire shared a video and announced to his legion of followers that he would be going to space. “Ever since I was 5 years old, I’ve dreamed of traveling to space. On July 20th, I will take that journey with my brother. The greatest adventure, with my best friend,” he wrote on the Instagram post, which he accompanied with a video.

The news of the space launch came shortly after Bezos made the surprising announcement that he would be stepping down from his post as CEO of Amazon, the company that made him the richest man in the world. “I’m excited to announce that this Q3 I’ll transition to Executive Chair of the Amazon Board and Andy Jassy will become CEO,” he told his employees in a letter, per MSNBC, noting that “in the Exec Chair role, I intend to focus my energies and attention on new products and early initiatives.”

Bezos’ passion for space shows, and while his shuttle launch could be seen as one giant leap for mankind, many aren’t too pleased with the former CEO’s new endeavor — like former Congresswoman Tulsi Gabbard. 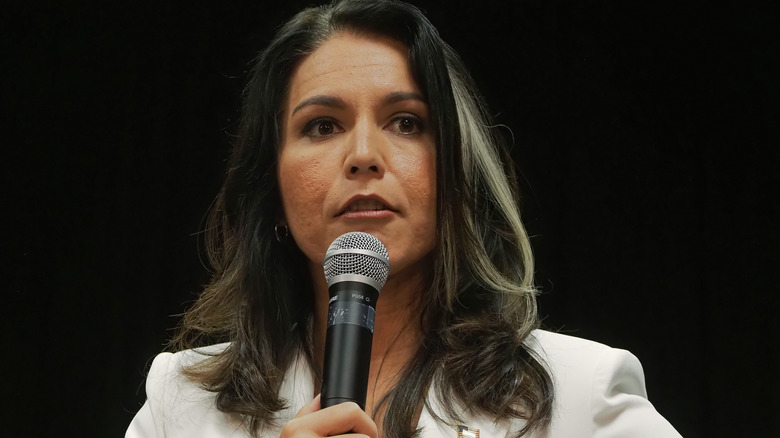 While some were thrilled about Jeff Bezos’ short space expedition and what it could mean for the future, the launch also had a lot of skepticism, including from Tulsi Gabbard. The former U.S. representative took to Twitter to share her thoughts about Bezos and his shuttle launch. “Bezos, please stay up there. Do the world a favor,” she wrote in the first tweet on July 20. But she didn’t stop there. “The only problem I have with Bezos’ Blue Origin space rocket ship into outer space is that it’s going to come back,” she continued in a second tweet.

The post received its fair share of praise and criticism, with some slamming her comments. “Wishing death upon others at 2 am isn’t a good look,” one person replied. But Gabbard seemed to be unbothered by the negative comments, and she launched one more tweet the next day that explained her reasoning for her anger at Bezos. “As the billionaires/power elite look down upon our planet they believe they own from their heavenly perch, regular folk struggle to pay the rent and put food on the table,” she wrote in a third tweet. “Never has the divide between the elite and the rest of us been so stark.”

Once again, the Twitterverse was divided over the comments by Gabbard, with several calling for her to run for president and several others asking if her account got hacked.