So here’s the tea. Irina just posted what can best be described as an “I’m hot, I’m single, goodbye Bradley Cooper” Instagram. And if you look very closely at the list of the 500K people who Liked it, you might find the name of one…Christian Carino.

And again, that wouldn’t be too weird on its own, but wait until you see the pic. Like, it’s a hot pic and it’s the definition of a breakup ’gram.

Here’s the receipt of the Like, in case you felt like you needed it, and the ’gram is immediately following. Please enjoy. 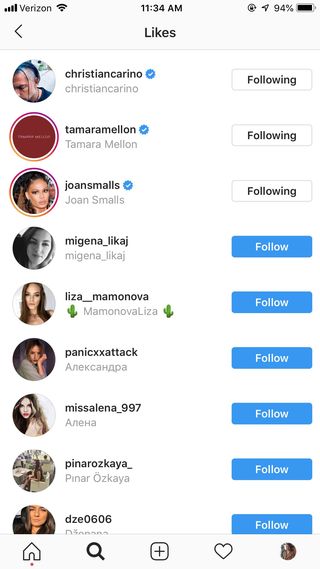 What’s kinda awk about the entire thing, on top of the fact that he just explicitly Liked her breakup Insta, is that while he follows her, she doesn’t follow him. You can check for yourself if you don’t believe me. He follows a whopping 99 people, so it’s kinda crazy that she’s one of them, right?

To add to all this, Irina unfollowed Lady Gaga way back in February after that infamous Oscars performance of “Shallow” where Gaga and BCoops basically eye-f*cked on the stage. Yet another layer of awkward!!

One more thing: Gaga doesn’t follow Irina on Instagram either. She only follows 39 people, so IDK how much you wanna read into that, but anyway. THIS TEA. It’s PIPING.