Vinnie Jones’ daughter Kaley, 32, says her parents taught her the ‘meaning of real love’ as she reveals her plans to marry her own partner to honour her late mother Tanya

Vinnie Jones’ daughter has revealed her parents taught her the meaning of real love, through their devotion to each other.

Kaley Jones, 32, said she now plans on marrying her own partner, who asked for her mother Tanya’s blessing just days before she died, in honour of her parent’s ‘love story’.

Although still grieving herself after Tanya, 53, passed away in July after a six-year battle with cancer, Kaley is looking after footballer-turned-actor Vinnie, 54, by reminding him to eat and get his clothes dry-cleaned. 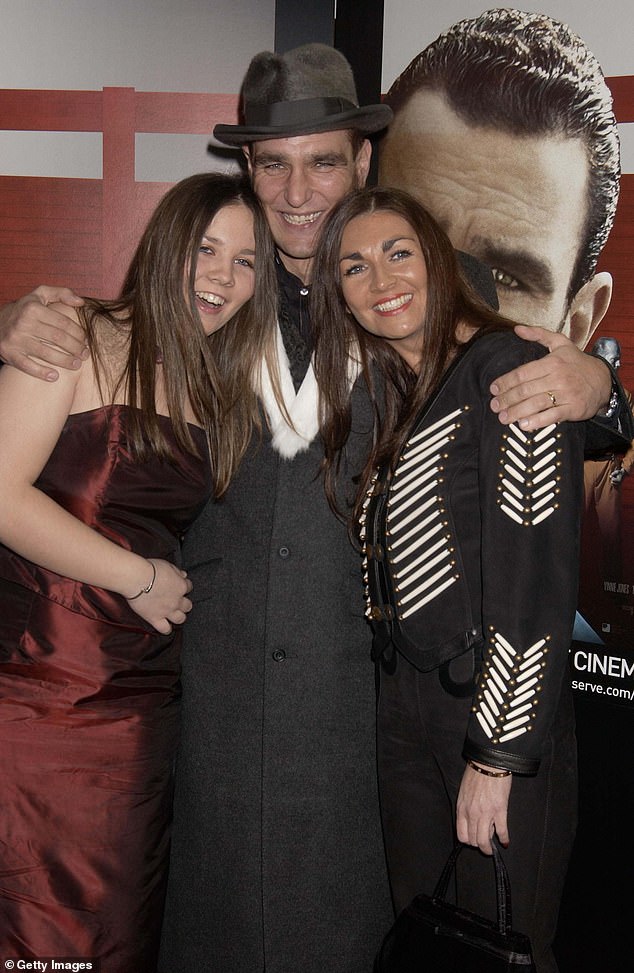 Close family: Vinnie and Tanya Jones’ daughter Kaley, pictured together at the Mean Machine Premiere in 2001, has revealed that her parents taught her the meaning of real love

Kaley, who gave up her job as a therapist to help look after Tanya, told the Mirror: ‘My parents taught me the meaning of real love. That will never die.’

She explained how even towards the end of her life Tanya didn’t stop talking about her love for Vinnie.

‘Even in hospital, she was talking about their upcoming 25th wedding anniversary. Every doctor or nurse, she would tell them their love story,’ Kaley said.

Now Kaley – who was adopted by Vinnie – is planning on marrying her own partner, 32-year-old chef Lauren Keefe, who asked Tanya for her blessing before she died. Devoted: Tanya and Vinnie, pictured after renewing their vows after 13 years of marriage in Las Vegas, Nevada, were devoted to each other and Tanya would chat to nurses and doctors about her upcoming 25th wedding anniversary when she was sick in hospital

Proud mother Tanya even helped Lauren with ideas of what sort of ring to give Kaley, suggesting that she wouldn’t want anything too extravagant.

Now four months on from losing her mother, Kaley says it is comforting to know that she has achieved the one thing her mother wanted for her.

She told the Mirror: ‘The one thing Mum wanted for me, I know she knows I have found – true love.’

Tanya, who died aged 53, had also been treated twice for cervical cancer and underwent a heart transplant at 21 following the birth of Kaley. 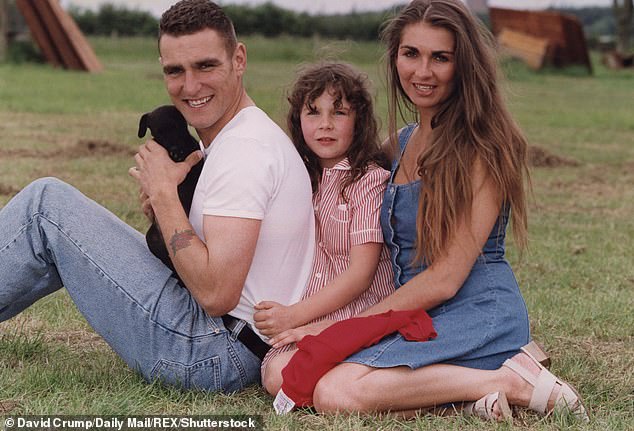 Loved: Kaley, pictured with her mother and father as a child, said: ‘The one thing Mum wanted for me, I know she knows I have found – true love’

After her death, Kaley found letters that Tanya wrote during that time which said she was so happy and grateful to be a mother.

It is thought that her cancer may have been a side effect of the drugs she has been taking following the heart transplant.

In the days before her death, Tanya was treated at Cedars Sinai Hospital in Los Angeles and spent her last hours at the home she shared with Vinnie. 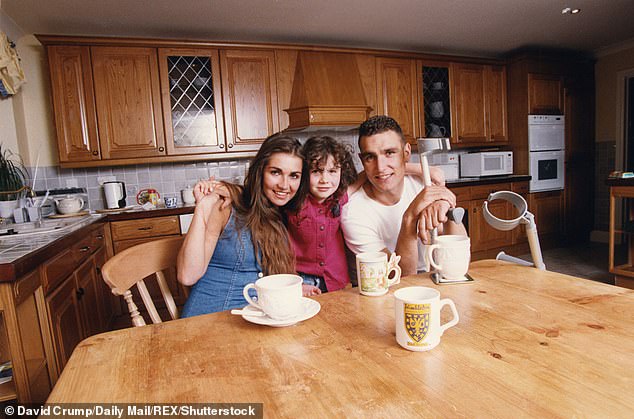 Happy times: After her mother’s death Kaley, pictured with her parents as a child at home in Hertfordshire, found letters written when she was a baby saying she was grateful to be a mum 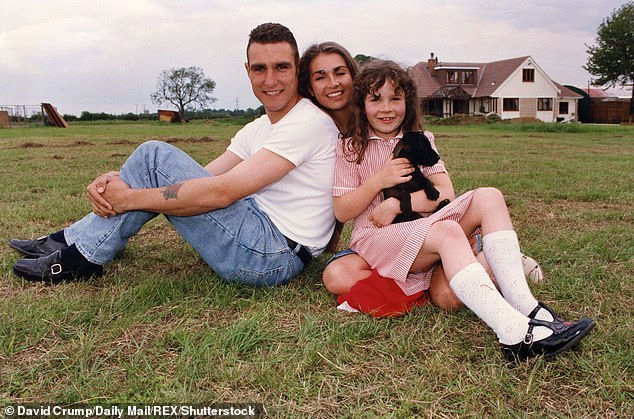 All together: Loving daughter Kaley, pictured as a child, gave up her job as a therapist to help care for Tanya and is now looking after Vinnie as he grieves

Speaking last week, Vinnie said: ‘In that last week of her life when the doctors said there were no more treatments, I never told her she was dying. We never spoke of that, I didn’t want her to know.

‘In the hospital I slept there every night and Kaley would come every morning.’

Vinnie also told the Sunday Mirror about his last moments with his beloved wife. 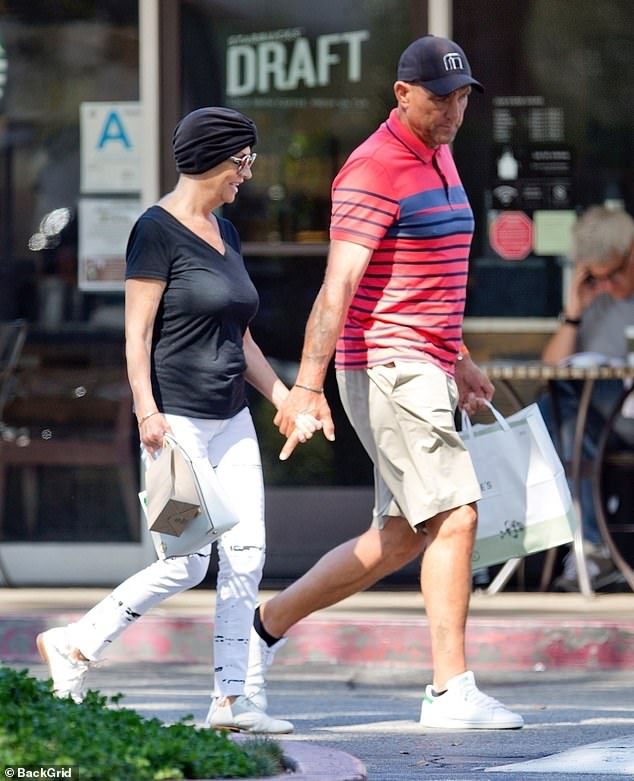 Married: Vinnie choked up with tears as he described his wife’s last days when she was told there would be no more treatment (the couple pictured in August 2018)

He said: ‘ I was cuddling her and holding her hand and when she finally went it felt like Tinkerbell had released from her into the room. I got peace from that.’

Vinnie, who won the 1988 FA Cup with Wimbledon’s ‘Crazy Gang’ and made his film debut in Lock, Stock And Two Smoking Barrels a decade later, said he would ‘never be with anyone else’ after losing his true love.

Speaking at Tanya’s childhood home near Watford, Vinnie choked up with tears as he read a handwritten love letter his wife left behind, emblazoned with the words ‘Always Believe Something Wonderful is About to Happen’. 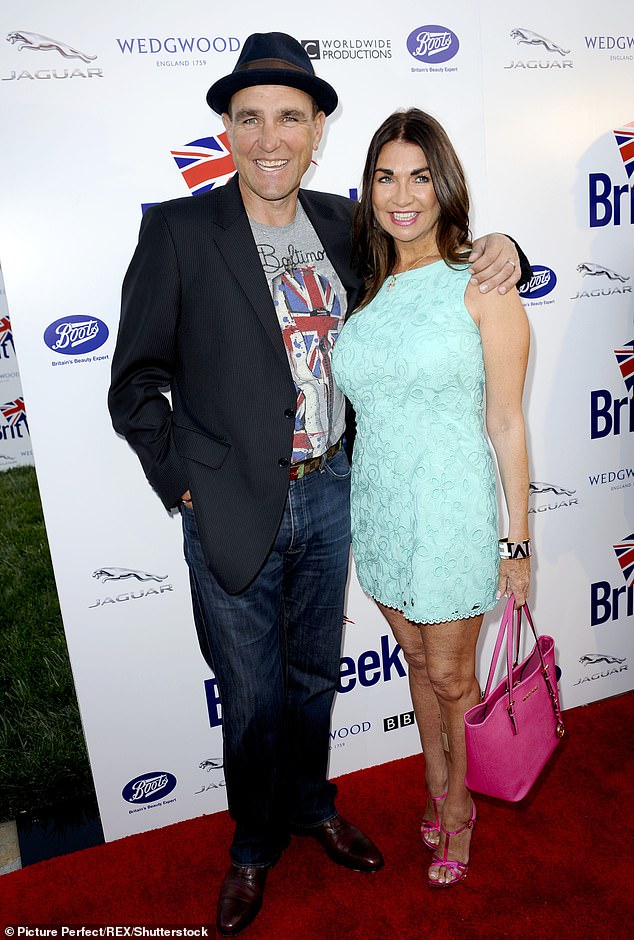 True love: Vinnie stayed at the hospital with his wife every night in the last week of her life and said Kaley would come every morning to see her mother (pictured in 2013)

Inside the card, which Vinnie carries with him everywhere, she wrote: ‘To my love Vin, something wonderful happens to me every day. It’s being with you. You are my morning sunshine the moment I wake. All my love, Tanya.’

‘I broke down when I read it because I loved her like that too,’ he told the publication.

Describing Tanya’s final days, he said: ‘In the hospital I got this I got a wonderful, wonderful memory just before we brought her home. 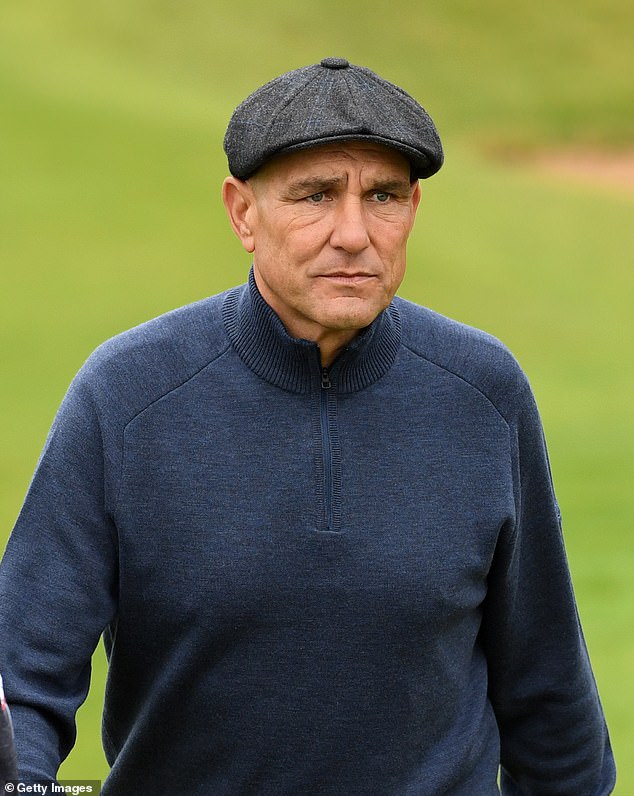 Grieving: Speaking of their relationship, an emotional Jones said: ‘People say, how did it last? And I say because it was real, true love. I think we found true love’ (pictured in August 2019)

‘She would sleep a lot, wake up, then fall asleep again. The nurses and doctors said: ‘Talk away, she is listening to you.’

‘There was one moment when we were talking about her horse and she was fast asleep, then all of a sudden she put her hands up like she was riding a horse.

‘She was stroking her pillow, as if stroking the horse’s mane. It proved to us she was listening.’ 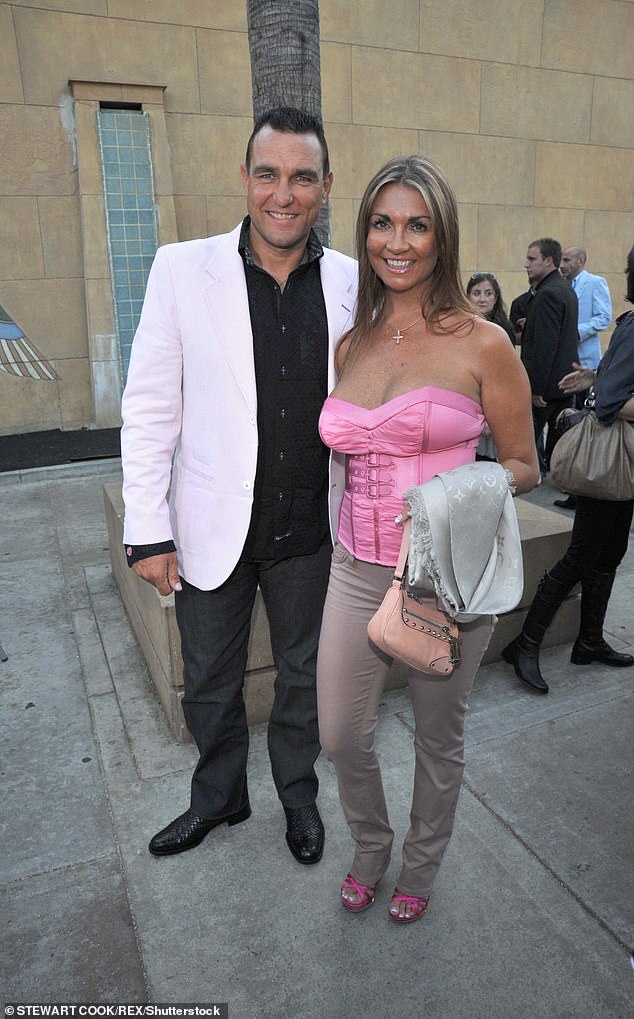 Speaking of their relationship, an emotional Vinnie said: ‘People say, how did it last? And I say because it was real, true love. I think we found true love.’

The couple met 25 years ago while Vinnie played for AFC Wimbledon, where he and a group of players earned notoriety as a members of the ‘Crazy Gang’ at the club.

They married in Watford in 1994 and renewed their vows in Las Vegas 2007, with Vinnie wearing the same purple wedding suit he wore when they first tied the knot 13 years earlier. 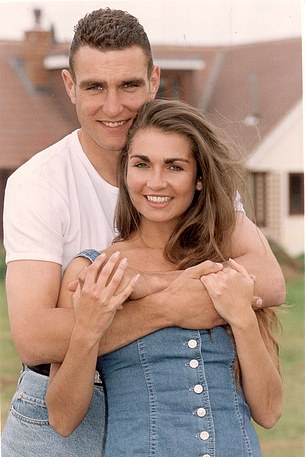 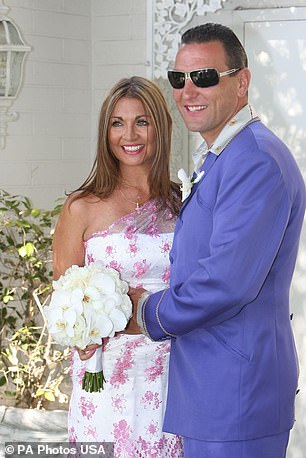 Love: Tanya Jones (pictured left in 1994 and right with Vinnie at their wedding) passed away surrounded by her family

Tanya is survived by her daughter, Kaley, by her former husband Steve Terry, and a son, Aaron, who she shares with Vinnie.

Speaking about his future without Tanya by his side, Vinnie said: ‘I just feel content crashing through the last 10 to 20 years of life in Tanya’s waiting room.

‘In the evenings I’ve cried every night… it’s lonely. It’s not self pity crying it’s ‘how am I going to go on?’.’

Vinnie also revealed he has bought a cemetery plot next to Tanya’s so his ashes can be buried alongside hers, according to the publication.

In 2013, Vinnie revealed both he and Tanya had melanoma, the most serious type of skin cancer, and he was later given the all-clear.

When the couple were first diagnosed, the former football legend said: ‘When it comes to things like this, women are stronger.

‘Suddenly I’ve gone from the one helping her to the one that needs support.

‘I take my strength from Tanya. She believes her life was saved to save me, and in return I feel it is my role to look after her.’

He added he did not know what he would do without her.

In an interview with the Daily Mirror in 2017, Vinnie described Tanya as ‘the most incredible person’, adding: ‘I think we’re the perfect match and I was lucky to find it.’ 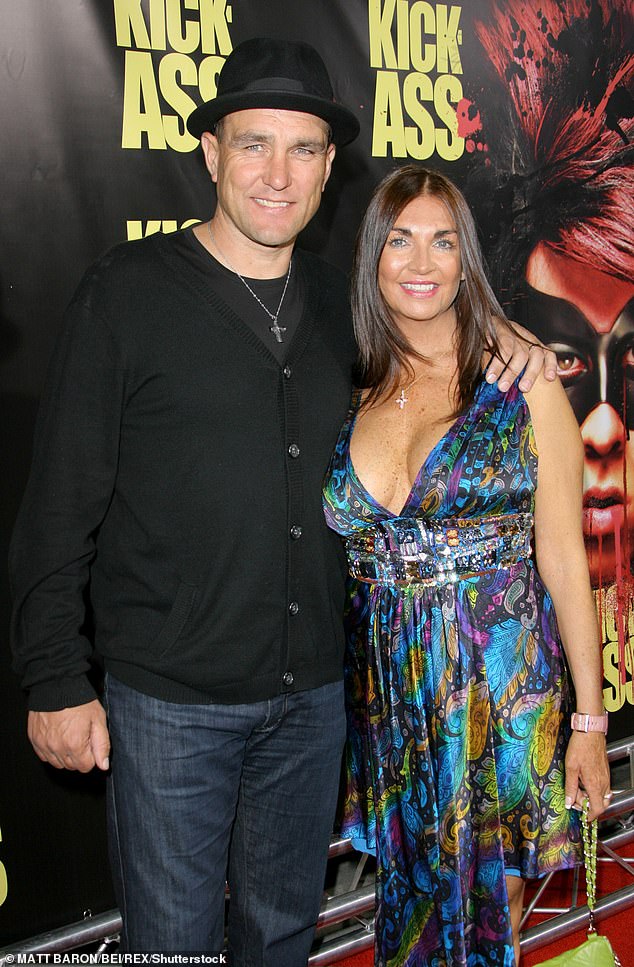 Commited: Tanya, who died aged 53, had also been treated twice for cervical cancer and underwent a heart transplant at 21 following the birth of her daughter Kaley (pictured in 2010)