Home » Celebrities » Who Will Control Congress After The 2020 Election? It’s Still Up In The Air

Who Will Control Congress After The 2020 Election? It’s Still Up In The Air

While the 2020 presidential election commanded the spotlight during this election season, the congressional race results deserve just as much attention — if not more. The party that controls Congress after a major election always plays an extremely influential hand in shaping the legislation that follows in the months and years to come, as well as what policies the new president can, or can’t, enact. As for who’s controlling Congress after the 2020 election, well, it’s still kind of up in the air.

With some races still to be called as of Nov. 17, a full two weeks after Election Day, Democrats are expected to keep their majority in the House, while Republicans are expected to battle for their Senate majority during 2021 runoff elections in Georgia. Per the Cook Political Report, as of Nov. 17, Democrats have won 221 seats in the House, just sneaking past the 218 needed to maintain a majority. Meanwhile, Republicans have taken 208 seats, with six races still undecided.

The real battle is for the Senate. As of Nov. 17, the Senate is split following the 2020 election, with Democrats set to hold 48 seats compared to 50 Republican seats starting in 2021, accounting for two independents who caucus with the Democrats. While both parties flipped seats in the Senate, Democrats — previously the minority party — had a net gain of two seats, putting them within sight of Senate control. Thanks to the election of Democratic Vice-President-elect Kamala Harris, and given the vice-president’s traditional role as a tie-breaker in the Senate, another two seats would effectively give Democrats control. Now, everyone is looking at Georgia, which will hold runoff elections for its two seats in January. 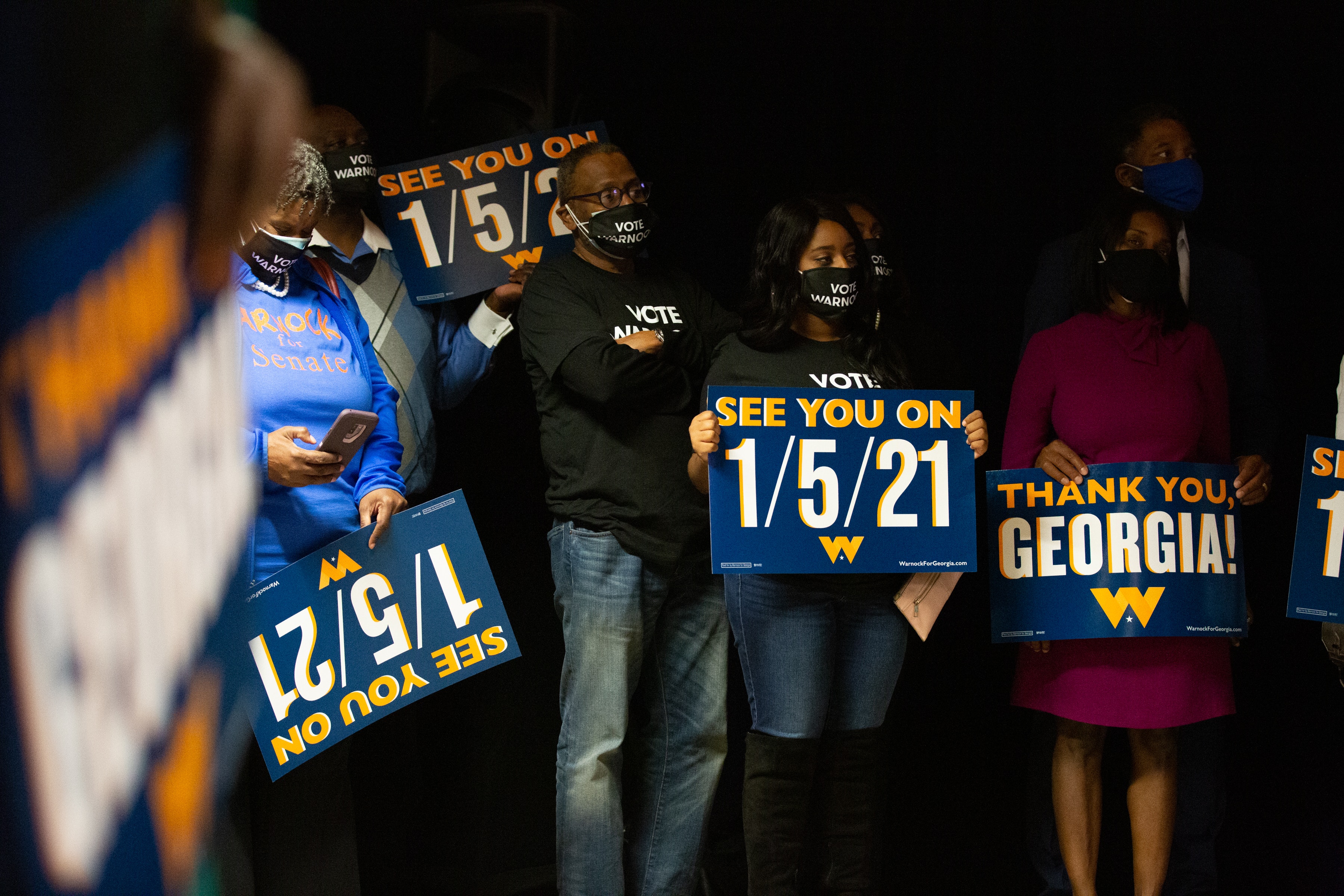 Republicans have had a tight grip on the Senate since 2016, and up until the 2018 mid-term elections, they did in the House, too. Tensions were high prior to the 2020 election with regard to the Senate races especially, as only a handful of seats needed to flip for Republicans to lose their 53-47 lead. Eyes were on a few races in which Republican senators were up for re-election — namely Senate Majority Leader Mitch McConnell of Kentucky, Sen. Lindsey Graham of South Carolina, and Sen. Susan Collins of Maine, all of whom kept their seats.

Now, Georgia is the center of attention. Georgia has a 50% majority vote threshold for candidates to claim victory, and none of the running candidates reached this majority in the Nov. 3 election. This means runoff elections will be held early next year. Unusually, there will be two Senate seats up for grabs in Georgia alone, since the seat vacated by the retired former Sen. Johnny Isakson must be filled. The Georgia runoff elections are scheduled to take place on Jan. 5, 2021, where voters in the state will choose whether or not Republican Senators David Perdue and Kelly Loeffler keep their seats. The conservative incumbents face Democratic challengers Jon Ossoff and Raphael Warnock, respectively.

Ossof, an Atlanta native, small business owner, and investigative journalist, is running on a platform that supports multiple progressive policies, and is dedicated to defending affordable health care, reproductive rights, criminal justice reform, LGBTQ+ rights, and more, according to his campaign. Warnock, a Morehouse College graduate and Atlanta pastor, also runs on a progressive platform, supporting criminal justice and police reform, accessible education, health care for all, and reproductive rights, among other pressing issues. If elected on Jan. 5, Warnock would be the very first Black legislator to represent Georgia in the U.S. Senate — a landmark occasion for the state, where nearly a third of the state’s population is Black, per U.S. Census Bureau information.

In early August, Republican Sen. Loeffler came under fire for objecting to the WNBA’s plans to honor the Black Lives Matter movement. As a co-owner of The Atlanta Dream basketball team, Loeffler wrote in a staunchly-worded letter to the WNBA’s commissioner, "I adamantly oppose the Black Lives Matter political movement," characterizing it as an organization that "promoted violence and destruction across the country." Criticism from fans and players alike came swiftly, and on Aug. 4, players from The Atlanta Dream showed their defiance by wearing shirts in support of Warnock, Loeffler’s biggest Democratic challenger.

Political observers and advocates will have to wait a few more months for answers about Congress in 2021. But with these high stakes, it’s certain that everyone will be watching.