A Canadian Town Is a Festive Anywhere, U.S.A., Onscreen

“Fatman,” the recently released action-comedy featuring Mel Gibson as Santa Claus, plays out in the rural backwoods of Alaska. “The Christmas Setup” (Dec. 12 on Lifetime) focuses on a budding same-sex romance between high school buddies reunited in Milwaukee. The story of a mysterious key left on a doorstep in “Unlocking Christmas” (Dec. 13 on Hallmark) is set somewhere in the United States.

But all three movies were shot outside Ottawa in Almonte, Ontario — a picturesque former mill town of about 6,000 residents situated along the Mississippi River (the Canadian version) and best known as the birthplace of James Naismith, inventor of the game of basketball.

“It’s the quintessential American small town,” explained Ainslie S. Wiggs, who, as an Ottawa location manager, had a hand in putting Almonte on Hollywood’s radar by helping to bring the shoot for the 2007 Lifetime movie “The House Sitter,” starring Tori Spelling, to the town.

“It’s got the main street, the beautiful stone buildings and shops, the water — all the elements that one imagines when they think of that warm and fuzzy small town that somebody left to go to the big city and comes back and reconnects with their roots,” she said. “If Norman Rockwell were to production design a small town for a film, that’s what he would draw.” 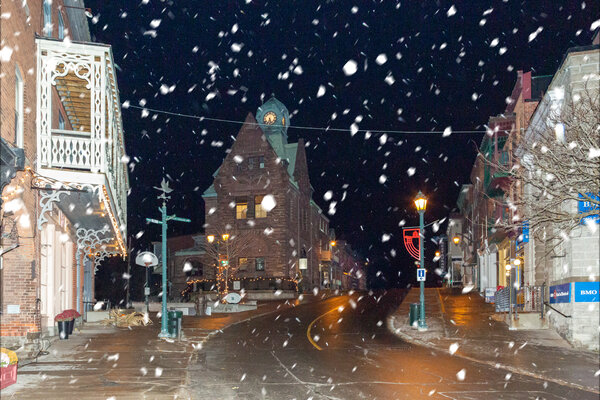 It’s a fitting background for the romantic and sentimental story lines of Hallmark and Lifetime holiday films, and Almonte has been making appearances in this genre since the 2016 Up TV movie “The Rooftop Christmas Tree.”

Since then, seven more Yuletide films have been shot in Almonte, which “can play any small town in any U.S. state,” Caitlin Delaney, who has served as a producer or production manager on several of those films, including “The Christmas Setup,” said, adding, “It’s very nondescript while being extremely beautiful.”

She said, “Every time we take a new director and director of photography to Almonte and they walk the main street, they are just blown away. It has this sense of what home should feel like.”

Pat Mills, the Ottawa-born director of “The Christmas Setup,” has long known about the town’s visual appeal.

“I remember going to Almonte as a child. It would be a place to go on a Sunday — just a cute little town,” he said. “The architecture is amazing; it’s so cinematic.”

For “The Christmas Setup,” Mills found a century-old, gingerbread-styled limestone house facing a steeple-topped church across the street. “You can’t really find that in a big city — this quaint, perfect, Christmassy classic neighborhood,” he said.

The sculptor Stephen Brathwaite, who lives in the Almonte area, helped make the town more camera-ready by leading a major restoration of heritage buildings along Mill Street in its main retail commercial district.

However, he explained, Almonte’s rich and varied architecture was already a cinematographer’s dream. Shops, housed in historic buildings, and mansions, built by owners of 19th-century woolen textile mills (including one home converted to a museum), are regularly used as backdrops or for interior shoots. So is a 1950s-style downtown diner.

Almonte brands itself “Mini Hollywood North” and benefits economically when movie crews turn to merchants for filming locations or goods and services, but there are limits to the number of shoots the town can accommodate.

Tiffany MacLaren, community economic and cultural coordinator for the municipality of Mississippi Mills, which includes Almonte, helps productions with logistics and said that the increase in shoots, bringing with them trucks and other equipment, had created headaches for local businesses.

“We have to understand that people live and work here,” said MacLaren, whose 17-year-old son, Cameron, makes an appearance in the most recent holiday movie shot in town, “Unlocking Christmas.”

Almontonians Kristi Latham, 47, and her 14-year-old daughter, Kali, served as background performers in “Fatman.” They were recruited after Latham posted a sign on her snow-covered front lawn that read, “Hey, Mel! You Can Be My Fatman (Santa) … And we can be your extras.”

“I’m a huge Mel Gibson fan,” said Latham, who runs a home-based hairstyling salon. “I never got a chance to meet him, though.”

Another local businesswoman, Inga Jutila, has yet to be on camera. But the eclectic home and garden shop she manages on Mill Street, L.G. Lee & Sons, has been featured in three movies, including “Unlocking Christmas,” albeit with different signs on the door.

“I know what I’m in for when I say yes now,” she said. “You’d be amazed at what it takes just to film one little scene — the number of people, the equipment, the props. They do take over, but they’re great, and go above and beyond to make sure that all your needs are met — and with Covid, they fogged the whole store before they came in and before they left.”

The Almonte experience has impressed some of the films’ stars.

The Tony- and Emmy-winning actress Jane Alexander spent several weeks living in an artist-owned waterfront condo on Mill Street while she was filming “Christmas Around the Corner,” a 2018 Lifetime film that used Almonte as a stand-in for a Vermont town.

Although she had never heard of Almonte before the shoot, Alexander said she “loved the layout of the town” and followed a routine that found her stopping in at the butcher, baker, an antiques shop and other boutiques.

Of all the North American movie locations she has been to over the past 50 years, Almonte “ranks high on the list,” said Alexander, who is also a Canadian resident living in rural Nova Scotia.

For Fran Drescher, a star of “The Christmas Setup,” Almonte evoked the feeling of “a bygone era of small community,” amplified when artificial snow and Christmas lights and decorations were added to the scene she shot there.

“It looked like something out of Currier & Ives that conjures up a kind of nostalgia that reminds us of our childhood — whether we lived that life or not,” said Drescher, who has a beachside home in Malibu, Calif.

Yet Mills, the “Christmas Setup” director, worried that the town might soon be “over-photographed, where so many Hallmark and Lifetime movies have used the main square.”

Then again, given that Almonte is a stand-in for Milwaukee in his own movie, he is “pretty sure that you’re not watching these movies for geographic accuracy,” he said. “You watch them to feel a nice warm blanket over you.”

Tanya Lopez, executive vice president of movies, limited series and original movie acquisitions at Lifetime, more or less confirmed Mills’s approach. She said her network’s focus was on “telling stories that are inclusive and different, rather than whether we’ve seen that bakery or sidewalk in Almonte before.”

As a light snow fortuitously fell on a Christmas town square for the final shoot of “Unlocking Christmas” earlier this month, Jutila of L.G. Lee & Sons was there, across the street in her shop, “watching it come together” and then “watching it go away.”