COPENHAGEN — In the opening scene of the Danish director Thomas Vinterberg’s new film, “Another Round,” a group of teenagers plays an unusual drinking game. Racing giddily in pairs around a city lake, they stop at every bench to down a beer from the case they haul between them; the first pair to circle the lake and empty their bottles wins.

If this were an American film, the scene might lead to tragedy or a hard-won lesson. But in Vinterberg’s hands, neither catastrophe nor moralizing materialize. Except for a bit of synchronized vomiting, no one gets hurt; the adults watch the youths’ antics indulgently; and even the police seem in on the joke. “Another Round” may be about drinking, but its vision of alcohol, although nuanced, is largely jubilant.

In Denmark, where movie theaters have been open since June, the film has been a resounding success, selling over half a million tickets (in a country of 5.8 million people) in its first month. Part of this popularity is no doubt thanks to the quality of the performances, led by Mads Mikkelsen, and the script, which Vinterberg co-wrote with Tobias Lindholm. But its depiction of the Danish relationship to alcohol has also clearly resonated. 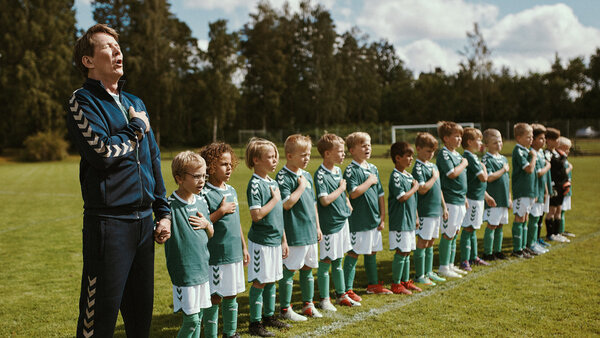 “It’s like what he did with ‘Festen’,” (“The Celebration” in North America) said Katrine Hornstrup Yde, a culture editor and film critic for the newspaper Information, of Vinterberg. “He shows us that this small, funny game is the key to really looking at ourselves.”

The film has also premiered at a time when, thanks to coronavirus and a resurgent #MeToo movement, Denmark’s alcohol habits are under new scrutiny. In a culture that perceives itself as reserved — even shy — and which has little tradition of small talk, drinking is an especially important fuel for social connection. That might help explain why Danes have the highest rates of “heavy, episodic” drinking of any country in the European Union.

“Another Round” begins its exploration of how alcohol can both enhance life’s joys and destroy them with an idea from Finn Skarderud, a (real-life) Norwegian psychiatrist who has suggested that humans are born with a blood alcohol level that is too low; raise it to 0.05 percent, his theory goes, and they perform better. In the film, the main characters — four schoolteachers grappling with midlife malaise — put this theory to the test.

To prepare for their roles, the actors went through an alcohol boot camp of sorts. “We used breathalyzers to test, OK, what happens at 0.05, what happens to your speech at 0.08, at 0.1?” Mikkelsen said. “With two glasses of wine, everything becomes a little easier. You’re in the zone, having a nice conversation, playing darts really well. At five beers, you’re getting sloppy; at eight, you’re not hitting the board anymore.”

Encouraged by the creativity and passion unleashed by their elevated blood alcohol, the four characters pursue ever higher levels of inebriation. That became more of a challenge for the actors, who wanted to avoid any caricatures. “However blurry things get in the 0.0 to 0.1 range, there’s still consciousness there,” Mikkelsen said. “And then all of a sudden it tilts, and you don’t care anymore. That’s where all the crazy stuff happens.”

Alcohol’s shifting effects from social lubricant to knockout punch are well known to anyone who’s ever had a few too many. But Vinterberg also recognizes that for normally reserved Danes, alcohol can be especially important. “We have this very constant, very chaste debate about alcohol,” he said. “But we also drink like Vikings.” Whether it comes to sex or fighting, he added, “it helps us lose control.”

In its earliest incarnation, the film was “a celebration of alcohol, pure and simple,” Vinterberg said. “I looked at all the great, amazing accomplishments done by really drunk people in politics and the arts.” The drinking habits of Ernest Hemingway and Winston Churchill still figure in the film, and one of its funniest sequences is a montage of clearly sloshed world leaders. But in its final form, “Another Round” has acquired a more nuanced view, one that makes room for alcohol’s dark side, following a personal tragedy that spurred Vinterberg to expand the movie’s scope.

Four days after filming began, his 19-year-old daughter Ida was killed when a car driven by a man texting on his phone hit the vehicle in which she and her mother were traveling. Ida was meant to play one of Mikkelsen’s character’s children in the film, and the movie is set at her high school. In his grief, Vinterberg almost abandoned the project.

For Mikkelsen, the transition was subtle. “That other meaning was already there in the script; we just had to bring it into the light,” he said. “It wasn’t something we all decided, it just happened naturally.”

Part of what makes the Danish relationship to drinking unusual is how much takes place among the young — especially 15-to-17-year-olds. Vinterberg himself only recognized the peculiarity of the Lake Run tradition that opens the film when a visiting American friend registered astonishment at his letting his daughter take part, and “Another Round” raises the interesting question of whether Danes learn their habit of connecting through alcohol at an exceedingly early age.

Denmark has some of the highest rates of teenage drinking in the world; a World Health Organization report released earlier this year found that Danish 15-year-olds consumed alcohol at nearly double the European average. Recent efforts to raise the minimum age for purchasing alcohol to 18 from 16 have met with resistance, in part because older adults recall their own youthful intoxications so fondly.

“Being a young person in Denmark is and will be inextricably linked to alcohol and drinking. It’s part of who we are,” Maja Gildin Zuckerman, an anthropologist, wrote recently in the newspaper Weekendavisen. “So we toast with them when they are 15 and pick them up at the emergency room after their stomachs are pumped when they are 16.”

Adult drinking habits have also fallen under renewed scrutiny recently after a second wave of #MeToo sexual harassment revelations began in Denmark in late August, resulting in a number of high-profile resignations, including a political party leader and the mayor of Copenhagen. Both men admitted to inappropriately touching women at the office Christmas parties — called julefrokost — at which extreme inebriation and other transgressive behaviors are not merely common but expected (it is not coincidental that no one brings their spouse to such parties).

“It’s clear that our drinking culture has so much to do with sexual assault,” said Yde, the culture editor. “And right now, there’s a lot more reflecting going on about these things. Of course, corona has kind of forced it — we can’t have the normal big drunken parties. But it’s also like we’ve taken a timeout to reflect on work and power relations.”

Although he himself applauds the discussions about harassment and drinking that are taking place, Vinterberg is pleased that his film has not, by and large, been pulled into the debate. “We’re not politicians or schoolteachers or priests,” he says. “We ask questions but we insist on not giving answers.”

Still, he admits to some concern about how his disinterest in moralizing will play in the United States when the film opens in theaters there Friday. (It will be available to buy on iTunes and other platforms on Dec. 18.) “A movie about four white, middle-aged, heterosexual men teaching youngsters to drink,” he said with a slight smile. “What’s not to be worried about?”

In Denmark, which has chosen the film for its Oscar submission, “Another Round” is being received as the love letter Vinterberg intended. “We have a special drinking culture, but until now, I don’t think we’ve had a single cultural representation that captures it,” Yde said, adding that the film “seems destined to become our shared reference point.”