‘A Quiet Place Part II’ Review: Pump Up the Volume

This sequel to John Krasinski’s alien-invasion blockbuster is brasher, louder and less focused than its predecessor. 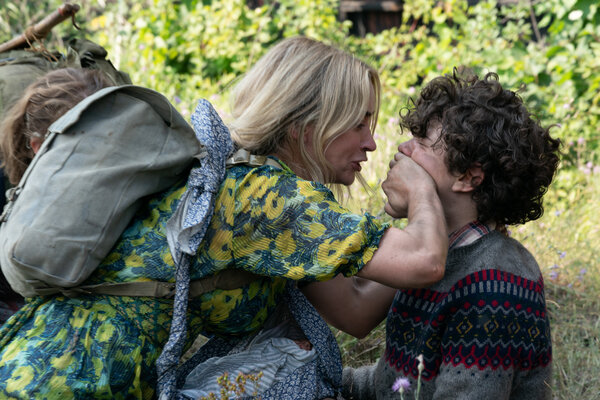 Movies need endings, but franchises need cliffhangers, and “A Quiet Place Part II” is emblematic of this problem. The first “A Quiet Place” (2018) gave us a beautifully tragic finale, one that emphasized the story’s core themes of human resilience and familial devotion. It was almost perfect, and it could have been enough.

The film’s unexpected success, however, gave Paramount Pictures other ideas. And while this new installment is, like its predecessor, wonderfully acted and intuitively directed (by John Krasinski, who is solely responsible for the story this time around), it has also largely replaced the hushed horror of the original with full-on action. Faster, coarser and far noisier, “Part II” sacrifices emotional depth for thriller setups that do less to advance the plot than grow the younger characters.

A tensely orchestrated opening rewinds to Day 1 of the alien invasion as Lee and Evelyn Abbott (Krasinski and Emily Blunt) and their three children enjoy a small-town Little League game. Once again employing a combination of terrifying visual effects and unsettling sound design, Krasinski and his team build a sequence of kinetic chaos that serves as both prologue to the first movie and primer for those who unwisely skipped it.

Catapulted to Day 474, mere minutes after the earlier film’s devastating conclusion, we find the remaining family members — including the newborn whose birth was a petrifying highlight of the previous installment — seeking shelter with a former neighbor, Emmett (Cillian Murphy), in an abandoned mill. Emmett, withdrawn and bereaved, is a less than congenial host. Nevertheless, when Evelyn’s daughter, Regan (still played to perfection by the deaf actor Millicent Simmonds), sneaks off to follow a radio signal she believes indicates other survivors, he agrees to follow and bring her home.

Splitting the film into two separate story lines, Krasinski strains to replicate the bonding that gave “A Quiet Place” its heart — scenes of tender domesticity that paused the horror and allowed us to exhale. And while the remainder of “Part II” never quite rises to the vigor and excitement of its prologue, its action-movie commitments leave little room for the characters to mourn their losses. So as we follow Regan and Emmett’s sometimes harrowing adventures; watch her injured brother, Marcus (Noah Jupe), fight to protect the baby back at the steel mill; and worry about Evelyn as she scavenges for oxygen and medical supplies, “Part II” becomes primarily a story of children forced to grow up too fast and see too much.

The aliens themselves, though, remain unfathomable, wanting nothing more than to eradicate us. (An idea that now, more than a year after the film’s original release date, feels uncomfortably metaphorical.) We know that they’re blind, navigate by sound, and that the feedback from Regan’s cochlear implant gives them the heebie-jeebies. But what do they eat? (If not humans, what are all those teeth for?) Are there baby beasties? Show me the nests!

Though in many respects an exemplary piece of filmmaking, “Part II” remains hobbled by a script that resolves two separate crises while leaving the movie itself in limbo. At least until Part III.