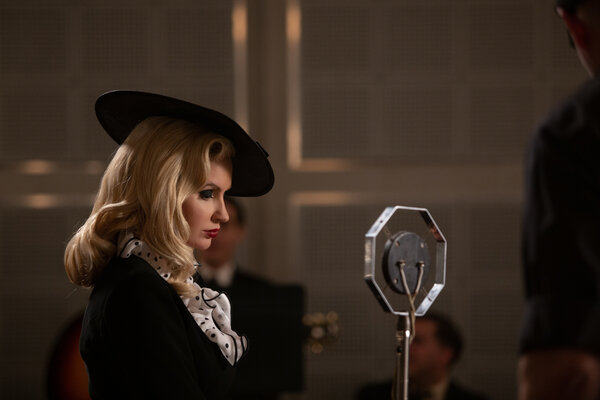 Mildred Gillars was an American woman who propagandized for the Nazis on German state radio for much of World War II. While not as well known as her Pacific counterpart “Tokyo Rose,” she acquired enough of a cachet to be nicknamed “Axis Sally” by contemporary troops who weren’t buying what she was selling.

Directed by Michael Polish from a script by Polish, Vance Owen and Daryl Hicks, “American Traitor: The Trial of Axis Sally,” a fictionalized version of her story, was executive produced by Meadow Williams, who plays Gillars. The movie begins with her arrest in Germany after the war. Gillars is extradited to Washington and indicted on many counts of treason and conspiracy. Her case is dumped in the lap of the gruff lawyer James Laughlin, played, well, gruffly by Al Pacino.

As the case moves to trial, the movie intercuts flashbacks detailing Gillars’s distinctly nonbrilliant career in Germany, from meeting with a condescending Joseph Goebbels to bedroom strategizing with her lover, who’s also her radio producer. Williams plays Gillars as a not particularly clever or sympathetic tough cookie doing what she needs to do to “survive.” The argumentation conveyed through both the performance and the script is weak.

This is a plodding and ultimately infuriatingly noncommittal movie. Its special pleadings are all over the map. And to make them, the filmmakers distort truth; for instance, mangling a famed Ernest Hemingway quote on the nature of war to make it specific to World War II. If Mildred Gillars has a story worth telling in a feature film, this isn’t it.